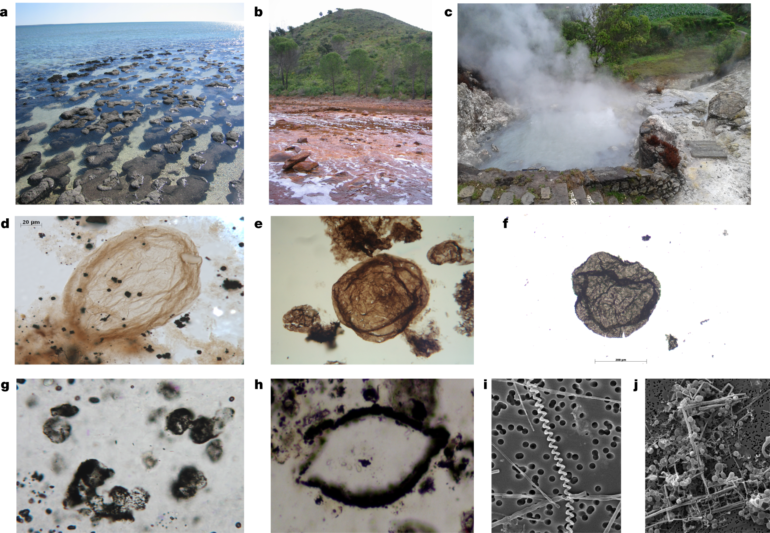 Using a powerful microscope, researchers at The University of Alabama have shown a method that can provide strong data in determining the origin of life on Earth and whether life existed on other planets.

Led by UA geologists specializing in using high-powered microscopes on biological material, researchers proved trace elements of early microbial life can be found in rocks and minerals, which could help in determining when life began on Earth, according to findings published in Proceedings of the National Academy of Sciences.

Certain bacteria create crystals, but it can be hard to decide whether an ancient tiny crystal in a rock was made by bacteria or through inorganic mineral formation. Using atom probe tomography in a study led Dr. Alberto Perez-Huerta, UA professor of geological sciences, researchers showed they can identify the nanoscale chemical imprints left by the bacteria that differentiate the crystals from those formed in a geological process.

The method could be used on samples from other planets such as a meteorite or a specimen returned from Mars by spacecraft to judge whether there were once bacteria present in the sample, according to the findings.

“Previous studies that have argued for a link between the origin of life and minerals have been based on circumstantial evidence,” Perez-Huerta said. “Our approach provides the smoking gun that enables scientists to actually visualize direct evidence of that link. This can unlock a lot of valuable data about how life appeared millions of years ago on Earth and can raise questions about what constitutes life on other planets.”

For the study, UA researchers used the instruments available at the Alabama Analytical Research Center, a research facility dedicated to nanoscale characterization—studying and manipulating materials that can be 1,000 times smaller than a human hair. It includes atom probes that reveal a detailed, 3D atomic map of a material.

At that scale, though, it has been difficult to study organic materials, limiting answers to the question of when life emerged on Earth. Scientists date the earliest rocks to be about 3.8 billion years old with potential evidence of bacteria showing up in rocks about 3.5 billion years ago. However, it’s not clear how or precisely when bacteria formed, nor is it clear what type of bacteria was the earliest to form.

Crystal formation is the likeliest place to find these early microbes. A type of lifeform called magnetotactic bacteria form magnetic crystals inside themselves to align with the Earth’s magnetic field, essentially creating a compass for navigation. When they die, the crystals are left behind, but, at that size, it has been hard to tell if a crystal came from the bacteria.

Using samples known to have organic crystals, the UA-led project showed the magnetotactic bacteria leave behind nano-sized traces of the elements carbon and nitrogen, necessary for life on Earth.

“We demonstrated that at this small scale we can find the key building blocks for life,” Perez-Huerta said. “The ability to find these biosignatures allows us to understand the primitive life forms that began evolution.”