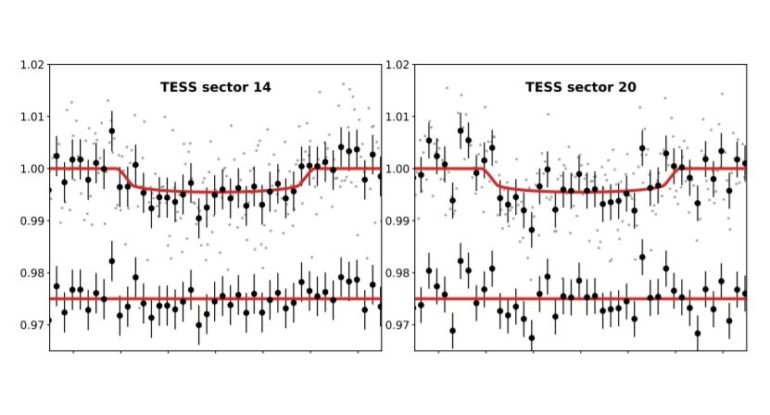 Using NASA’s Transiting Exoplanet Survey Satellite (TESS), an international team of astronomers has detected a sub-Neptune exoplanet orbiting a nearby M dwarf star. The newly found alien world, designated TOI-2257b is about two times larger than the Earth. The finding is reported in a paper published November 2 on the arXiv pre-print server.

TESS is conducting a survey of about 200,000 of the brightest stars near the sun with the aim of searching for transiting exoplanets. So far, it has identified over 4,600 candidate exoplanets (TESS Objects of Interest, or TOI), of which 167 have been confirmed so far.

Recently, a group of astronomers led by Nicole Schanche of the University of Bern in Switzerland has confirmed another TOI monitored by TESS. While observing a nearby M-dwarf known as TOI-2257 (other designation TIC 198485881), a transit signal was identified in the light curve of this star. The planetary nature of this signal was confirmed by follow-up observations using ground-based facilities.

“This work presents the discovery and characterization of TOI-2257b, a sub-Neptune in a relatively long-period orbit around an M3V star. The preliminary characterization is based on photometry from TESS and several ground-based facilities, with spectral analysis and high-resolution imaging supporting the validation,” the researchers wrote in the paper.

According to the study, TOI-2257b has a radius of about 2.19 Earth radii and is some 5.71 times more massive than our planet. The exoworld orbits its parent star every 35.19 days on a highly eccentric orbit (with an eccentricity of nearly 0.5) at a distance of 0.145 AU from it. The planet’s equilibrium temperature is estimated to be 256 K.

The host TOI-2257 is an M dwarf at least 8 billion years old and its spectral type was found to be M3V. The star, located just 188 light years away, is about one-third the size and mass of the sun, has a metallicity at a level of -0.27, and an effective temperature of around 3,430 K.

Summing up the results, the astronomers noted that the newly found exoplanet has a relatively long orbital period, as only two other transiting exoplanets around M dwarfs with periods greater than that of TOI-2257 b are known to date. Moreover, it is also the most eccentric exoplanet transiting an M dwarf so far detected, what offers a great opportunity to test various possible planet formation scenarios.

The authors of the paper consider further observations of TOI-2257, hoping to find more planets in the system and even liquid water in the atmosphere of TOI-2257b.

“This planet is one of only a small number of sub-Neptunes for which liquid water is a possibility. The expected TSM [transmission spectroscopy metric] of the object make it amenable to more detailed atmospheric characterization from JWST [James Webb Space Telescope],” the researchers concluded.