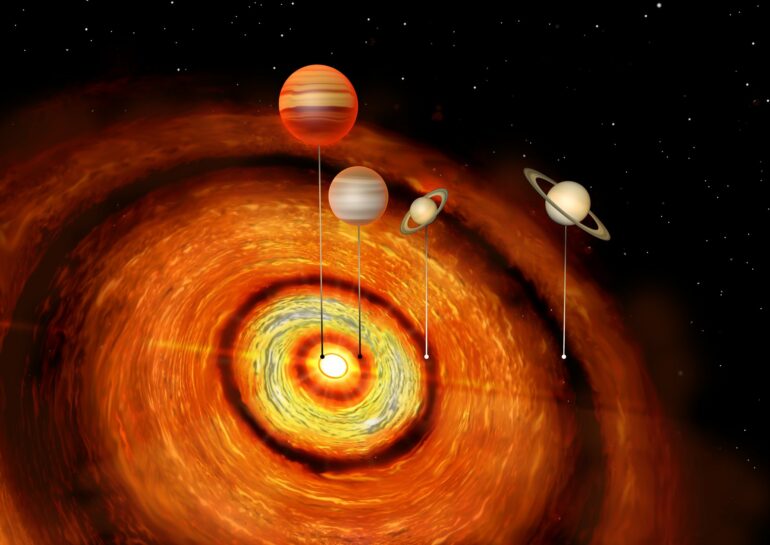 Little ‘hurricanes’ that form in the disks of gas and dust around young stars can be used to study certain aspects of planet formation, even for smaller planets which orbit their star at large distances and are out of reach for most telescopes.

Researchers from the University of Cambridge and the Institute for Advanced Study have developed a technique, which uses observations of these “hurricanes” by the Atacama Large Millimeter/submillimetre Array (ALMA) to place some limits on the mass and age of planets in a young star system.

Pancake-like clouds of gases, dust and ice surrounding young stars—known as protoplanetary disks—are where the process of planet formation begins. Through a process known as core accretion, gravity causes particles in the disk to stick to each other, eventually forming larger solid bodies such as asteroids or planets. As young planets form, they start to carve gaps in the protoplanetary disk, like grooves on a vinyl record.

Even a relatively small planet—as small as one-tenth the mass of Jupiter according to some recent calculations—may be capable of creating such gaps. As these “super-Neptune” planets can orbit their star at a distance greater than Pluto orbits the Sun, traditional methods of exoplanet detection cannot be used.

In addition to the grooves, observations from ALMA have shown other distinct structures in protoplanetary disks, such as banana- or peanut-shaped arcs and clumps. It had been thought that at least some of these structures were also driven by planets.

“Something must be causing these structures to form,” said lead author Professor Roman Rafikov from Cambridge’s Department of Applied Mathematics and Theoretical Physics, and the Institute for Advanced Study in Princeton, New Jersey. “One of the possible mechanisms for producing these structures—and certainly the most intriguing one—is that dust particles that we see as arcs and clumps are concentrated in the centers of fluid vortices: essentially little hurricanes that can be triggered by a particular instability at the edges of the gaps carved in protoplanetary disks by planets.”

Working with his Ph.D. student Nicolas Cimerman, Rafikov used this interpretation to develop a method to constrain a planet’s mass or age if a vortex is observed in a protoplanetary disk. Their results have been accepted for publication in two separate papers in the Monthly Notices of the Royal Astronomical Society.

“It’s extremely difficult to study smaller planets that are far away from their star by directly imaging them: it would be like trying to spot a firefly in front of a lighthouse,” said Rafikov. “We need other, different methods to learn about these planets.”

To develop their method, the two researchers first theoretically calculated the length of time it would take for a vortex to be produced in the disk by a planet. They then used these calculations to constrain the properties of planets in disks with vortices, basically setting lower limits on the planet’s mass or age. They call these techniques” vortex weighing” and “vortex dating” of planets.

When a growing planet becomes massive enough, it starts pushing material from the disk away, creating the tell-tale gap in the disk. When this happens, material on the outside of the gap becomes denser than material on the inside of the gap. As the gap gets deeper and the differences in density become large, an instability can be triggered. This instability perturbs the disk and can eventually produce a vortex.

“Over time, multiple vortices can merge together, evolving into one big structure that looks like the arcs we’ve observed with ALMA,” said Cimerman. Since the vortices need time to form, the researchers say their method is like a clock that can help determine the mass and age of the planet.

“More massive planets produce vortices earlier in their development due to their stronger gravity, so we can use the vortices to place some constraints on the mass of the planet, even if we can’t see the planet directly,” said Rafikov.

Using various data points such as spectra, luminosity and motion, astronomers can determine the approximate age of a star. With this information, the Cambridge researchers calculated the lowest possible mass of a planet that could have been in orbit around the star since the protoplanetary disk formed and was able to produce a vortex that could be seen by ALMA. This helped them put a lower limit on the mass of the planet without observing it directly.

By applying this technique to several known protoplanetary disks with prominent arcs, suggestive of vortices, the researchers found that the putative planets creating these vortices must have masses of at least several tens of Earth masses, in the super-Neptune range.

“In my daily work, I often focus on the technical aspects of performing the simulations,” said Cimerman. “It’s exciting when things come together and we can use our theoretical findings to learn something about real systems.”

“Our constraints can be combined with the limits provided by other methods to improve our understanding of planetary characteristics and planet formation pathways in these systems,” said Rafikov. “By studying planet formation in other star systems, we may learn more about how our own solar system evolved.”