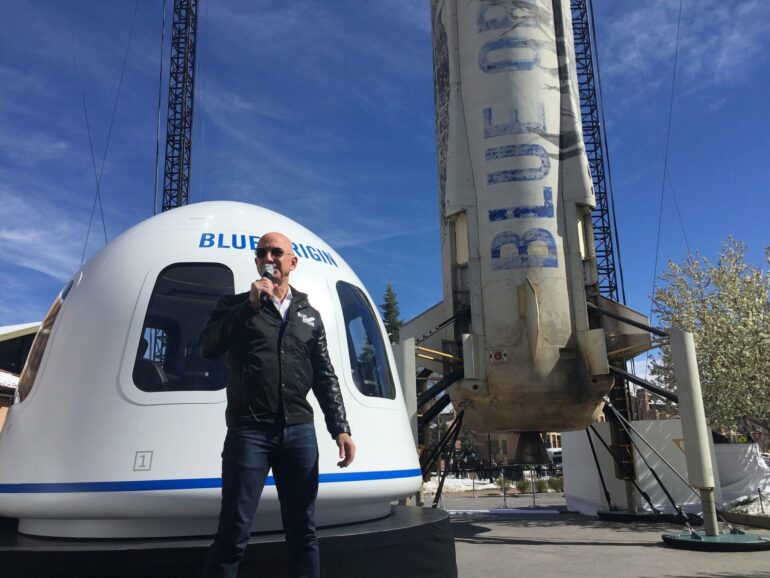 The white spacecraft called New Shepard lifted off with a roar from a desert spot in west Texas at 8:26 local time (1326 GMT).

The crew hooted with glee as the rocket reached space, a Blue Origin webcast showed.

The flight included engineer Katya Echazarreta, who at 26 became the youngest American woman in space. The Guadalajara native also became the first Mexican-born woman to go into space.

Her spot was sponsored by Space for Humanity, a program which seeks to democratize access to space and selected her from among 7,000 candidates.

The gumdrop-shaped capsule holding the crew detached from the rocket once the latter took them into the heavens.

The rocket booster part then eased down vertically, letting off a sonic boom at one point, and landed to be reused.

The capsule kept going up until it crossed the so-called Karman line at an altitude of about 100 km (60 miles), which by international convention is considered the boundary between Earth’s atmosphere and space.

At that height the crew experienced weightlessness for a few minutes and could observe Earth’s curvature through big windows in New Shepard.

The capsule then fell back to Earth, with three giant parachutes and retro engines helping it make a gentle landing that kicked up a big cloud of dust.

This flight had been scheduled for May 20 but was delayed because of a problem with one of the spacecraft’s back-up systems. Blue Origin did not give details of the problem.

Blue Origin is a leading player in the nascent space tourism market.

It flew Bezos on its maiden crewed flight in July 2021, and has also flown Star Trek icon William Shatner and Laura Shepard Churchley, the daughter of the first American in space.

Blue Origin’s competitor for this kind of thing is Virgin Galactic.

But since its maiden voyage last July carrying its founder, the business tycoon Richard Branson, the spacecraft has stayed on the ground to undergo modifications.