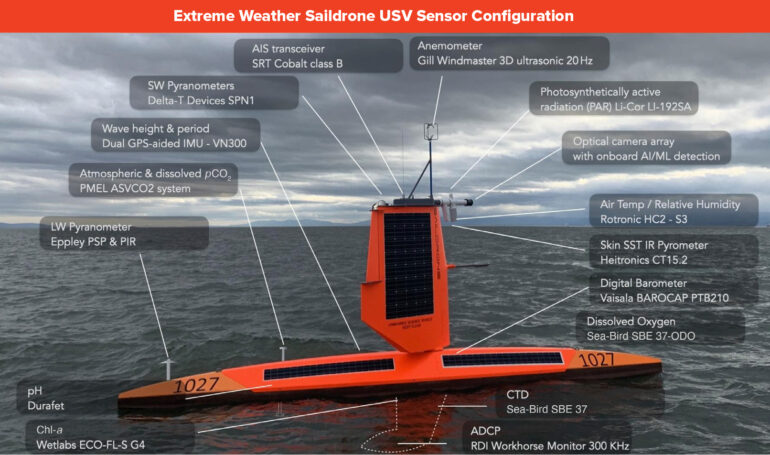 With forecasters at NOAA’s Climate Prediction Center (a division of the National Weather Service) predicting above-average hurricane activity this year, a paper published in the peer review magazine Oceanography shows that robotic ocean observing platforms can improve intensity forecasts for hurricanes and tropical storms and should be supported as a crucial component of the ocean infrastructure designed to protect the lives of coastal residents and mitigate the economic impact from storms.

The Atlantic hurricane season, which officially begins today, is expected to bring 14-21 named storms, including 3 to 6 major hurricanes with winds of 111 mph or higher.

In the U.S., hurricanes have caused more than $1 trillion in losses since 1980, and while the landfall forecasts that drive evacuation orders and guide coastal preparations ahead of storms have been steadily improving, storm strength forecasting has lagged. Storm intensity is influenced by many factors, including atmospheric circulation, internal storm dynamics and air-sea interactions, as well as boundary currents—for instance, the Loop Current in the Gulf of Mexico—and even seafloor topography

While some existing ocean observing tools provide data useful for numerical storm modeling, they are not responsive enough to fill all the data gaps, especially in the air-sea interface—where the ocean and atmosphere exchange heat and energy—and upper ocean dynamics, which are critical for forecasting storm strength. Between 2018 and 2021, underwater gliders were deployed more than 280 times and spent 13,000 days at sea in the open Atlantic Ocean, the Caribbean Sea, the Gulf of Mexico and off the U.S. East Coast during hurricane seasons to test whether they could help fill the data gaps.

Underwater gliders are autonomous underwater robots that collect ocean data in remote locations and at depth and can be programmed and piloted remotely to conduct specific missions.

Both types of robots can operate and gather data in hazardous conditions where sending crewed ships would put human lives at risk. And, given their ability to communicate data quickly, information can be utilized for storm forecasting in near-real time—even while storms are approaching coastal populations.

For instance, during the 2021 season, the National Oceanic and Atmospheric Administration (NOAA) supported the first-time deployment and operation of five extreme weather Saildrones strategically located in the western tropical Atlantic, the Caribbean and East Coast. They continuously measured properties in the near-surface atmosphere and ocean and transmitted one-minute averaged data to the data centers in real time for assimilation into forecast models and for other public use.

In the paper, “Uncrewed Ocean Gliders and Saildrones Support Hurricane Forecasting and Research,” authors from more than a dozen governmental, nongovernmental and academic institutions involved in deploying these platforms during the 2021 hurricane season detailed how gliders have improved intensity forecasting and, further, how adding Saildrones operating in close proximity improved intensity forecasting even further.

“One of the main objectives during the 2021 Atlantic hurricane season was to obtain measurements of the upper ocean and air-sea coupling within a hurricane from co-located platforms at the same time,” said the study’s lead author, Dr. Travis N. Miles, Assistant Research Professor in the Rutgers University Center for Ocean Observing Leadership. “These data can help us understand how upper ocean features and the overlying atmosphere co-evolve during hurricanes. This is particularly important with storms like Ida that rapidly intensified over the dynamic coastal ocean before making landfall. Direct assimilation of these data into models, and new model development based on research findings will lead to improved modeling systems and ultimately better intensity forecasts.”

The study also calls for future deployments to combine simultaneous measurements to continue to improve hurricane modeling and forecasting.

“In the ocean observing community, we know that the tools and technologies we bring to bear to help forecast the strength and movement of these storms saves lives and that our predictions have greatly improved over time,” says Dr. Barbara Kirkpatrick, study co-author and Senior Advisor from the Gulf of Mexico Coastal Ocean Observing Organization (GCOOS), which hosts and shares ocean observing data from gliders and other instruments. “We also know that having more ocean observing assets in place could only make things safer for all coastal communities—in the Gulf of Mexico and beyond. At GCOOS, we continue to advocate for funding to support these tools.”

GCOOS has developed a tool (nicknamed GANDALF) that tracks and maps gliders currently deployed in the Gulf of Mexico. Users can see how many gliders are currently in the Gulf, their location and access data being collected by the gliders. Data collected includes water temperature, salinity, dissolved oxygen and other parameters, depending on research needs.

GCOOS has also created the GCOOS Hurricane Dashboard, a tool that provides information needed to monitor the strength and movement of tropical systems and how to prepare if a storm is heading toward your home. Users can access the current location, intensity, and movement of tropical systems, latest predictions, local emergency contacts, and guidance for storm preparations.