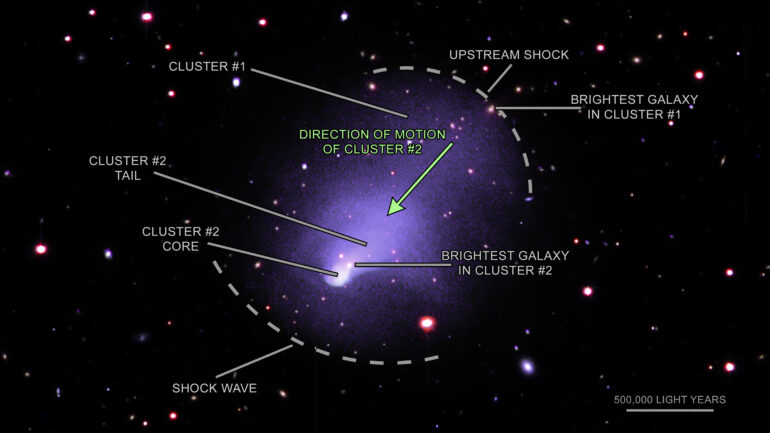 A new study shows a deep connection between some of the largest, most energetic events in the universe and much smaller, weaker ones powered by our own Sun.

The results come from a long observation with NASA’s Chandra X-ray Observatory of Abell 2146, a pair of colliding galaxy clusters located about 2.8 billion light-years from Earth. The new study was led by Helen Russell from the School of Physics and Astronomy at the University of Nottingham.

Galaxy clusters contain hundreds of galaxies and huge amounts of hot gas and dark matter and are among the largest structures in the universe. Collisions between galaxy clusters release enormous amounts of energy unlike anything witnessed since the big bang and provide scientists with physics laboratories that are unavailable here on Earth.

In the composite image above of Abell 2146, Chandra X-ray data (purple) shows hot gas, and Subaru Telescope optical data shows galaxies (red and white). One cluster (labeled #2) is moving towards the bottom left in the direction shown and plowing through the other cluster (#1). The hot gas in the former is pushing out a shock wave, like a sonic boom generated by a supersonic jet, as it collides with the hot gas in the other cluster.

The shock wave is about 1.6 million light-years long and is most easily seen in a version of the X-ray image that has been processed to emphasize sharp features. Also labeled are the central core of hot gas in cluster #2, and the tail of gas it has left behind. A second shock wave of similar size is seen behind the collision. Called an “upstream shock,” features like this arise from the complex interplay of stripped gas from the infalling cluster and the surrounding cluster gas. The brightest and most massive galaxy in each cluster is also labeled.

Shock waves like those generated by a supersonic jet are collisional shocks, involving direct collisions between particles. In Earth’s atmosphere near sea level, gas particles typically travel only about 4 millionths of an inch before colliding with another particle.

Conversely, in galaxy clusters and in the solar wind—streams of particles blown away from the Sun—direct collisions between particles occur too rarely to produce shock waves because the gas is so diffuse, with incredibly low density. For example, in galaxy clusters particles typically must travel about 30,000 to 50,000 light-years before colliding. Instead, the shocks in these cosmic environments are “collisionless,” generated by interactions between charged particles and magnetic fields

Helen commented that “I first detected these shock fronts in an earlier, short Chandra observation when I was a Ph.D. student. It was a thrilling discovery and a fantastic journey to this deep, legacy observation revealing the detailed shock structure.”

Using this powerful data, Russell and her team studied the gas temperature behind the shock waves in Abell 2146. They showed that electrons have been mainly heated by compression of gas by the shock, an effect like that seen in the solar wind. The rest of the heating occurred by collisions between particles. Because the gas is so diffuse this additional heating took place slowly, over about 200 million years.

Collisionless shock waves are important in several other fields of research. For example, the radiation produced by shocks in the solar wind can negatively impact spacecraft operation, as well as the safety of humans in space.

A paper describing these results was accepted by The Monthly Notices of the Royal Astronomical Society.