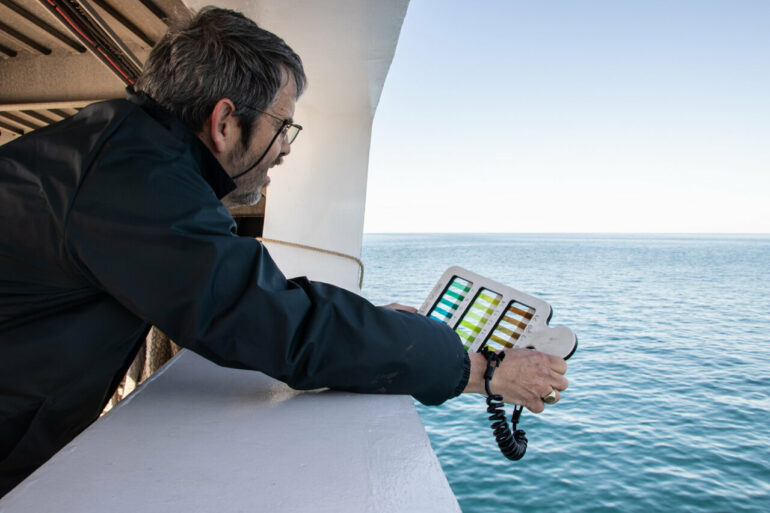 A new synthesis of two decades of data has elucidated the startling transformation of the warming Gulf of Maine. Gathered and analyzed by researchers at Bigelow Laboratory for Ocean Sciences, the study shows many trends that all point to an overarching pattern. The Gulf of Maine is being increasingly influenced by warm water from the North Atlantic, and this is changing the very foundation of its food web.

“We’ve seen that the growth rate of phytoplankton is about a third of what it was 20 years ago; that’s a really big deal,” said Senior Research Scientist William Balch, lead author on the NASA-funded study. “These microscopic plants are the base of the food web on which all ocean life depends, and the change is connected to patterns and processes well beyond the Gulf of Maine.”

Published by six authors from Bigelow Laboratory and two from Bermuda Institute of Ocean Sciences, the team’s findings tell a complex, interconnected story of transformative change.

The data show that the Gulf of Maine is rapidly warming overall. At the average depth of the Gulf, around 500 feet, mean temperatures have increased almost three degrees Fahrenheit over the last 20 years. Shallow waters have warmed slightly less during that time, and, surprisingly, have cooled in the spring months. Balch’s new study is the first to show it.

“We all work with this mantra that the Gulf of Maine is one of the fastest warming bodies of water on the planet,” Balch said. “Well, there’s an asterisk next to that now, which is really important to understanding the complex changes we’re seeing.”

The cooling is only happening at depths above 160 feet and only during the spring season, which suggests an increasing amount of cold surface water is coming into the Gulf of Maine from cooler regions to the north, outside the Gulf.

Despite this limited and seasonal exception, the Gulf is still warming significantly overall, which is driving its transformation. Balch and his team used the long-term data from the Gulf of Maine North Atlantic Time Series to determine that warm, salty water from the North Atlantic has been intruding into deeper parts of the Gulf since 2008. This has raised both the temperature and salinity—with significant impacts.

“It’s not like the Gulf of Maine is an isolated pond and all the warming happening here is only happening in place,” Balch said. “Rising temperatures are in large part due to this large influx of North Atlantic water, which itself is getting warmer. These changes take time, and they are fundamentally altering the planet.”

Balch and other scientists from Bigelow Laboratory started the Gulf of Maine North Atlantic Time series in 1998 to collect data at sea in order to validate NASA satellite information and observe any long-term environmental changes. The team takes the same measurements at the same geographic points about 10 times a year. This has provided a wealth of information on the physical, chemical, and biological conditions in the region—and the dramatic changes they have gone through.

“We’re able to illuminate important interconnections because we have a big enough dataset,” Balch said. “It allowed us to take a holistic look at this important region and determine what the warming means for Gulf of Maine processes and the life that depends on them.”

Despite the alarming trends, Balch remains hopeful for the Gulf of Maine. Organisms are finding new habitats, filling niches, and adapting. Things may never be what they once were, but the planet could heal if our society gives it the chance.

“These changes are the results of our actions, the grand experiment that we humans have run on this planet since the industrial age when we started burning fossil fuels,” Balch said. “The future of the Gulf of Maine relies on us keeping our carbon dioxide emissions down, and that choice is completely under our control.”

The research was published in the Journal of Geophysical Research: Biogeosciences.