The surprising musical dynamics of a lava lake on Kīlauea volcano 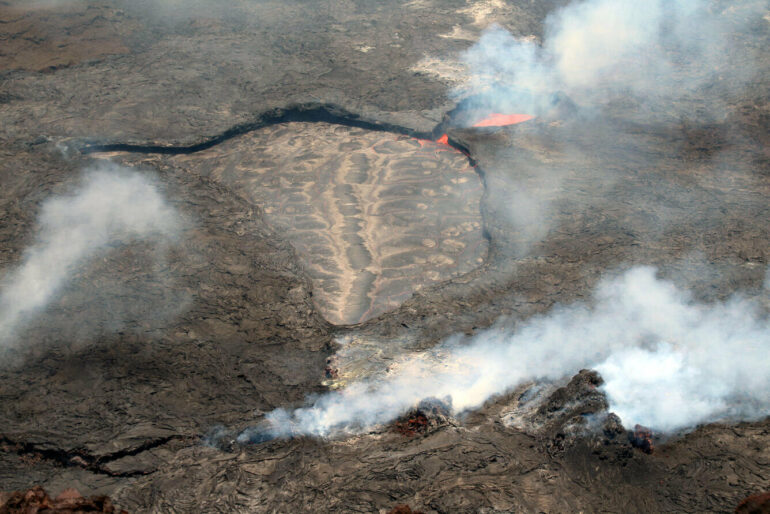 A lava lake in a crater of Kīlauea spent ten years sloshing and churning before the volcano gave a bigger belch.

Kīlauea erupted dramatically in 2018. Earthquakes, ash plumes, and lava flows disrupted life on Hawaii’s Big Island and changed the volcano’s topography. But Kīlauea was more gently erupting for a decade before its big blowout. One prominent feature of this slow-moving eruption: A persistent lake of lava that formed inside the Halema’uma’u crater at Kīlauea’s summit.

New research from University of Oregon earth scientists reveals how the dynamics of this lava lake, along with deformation of ground around it, encode the signature of migrating volcanic gases and changing magma temperature in the shallow plumbing system of the volcano.

“It’s a new view into the dynamics of a really popular volcano,” says Leif Karlstrom, an earth scientist at UO who led the work. “People could stand near the lava lake rim and visit the lava flows coming out. But under the surface, there was lots more going on.” Karlstrom and Josh Crozier, a former UO Ph.D. student now at the USGS California Volcano Observatory, report their findings June 1 in the journal Science Advances.

Kīlauea’s lava lake was fed by a below-ground magma chamber, connected to the surface by a passageway. Since lava cools and solidifies fairly quickly, maintaining a consistent lava lake requires a remarkable balance: a steady influx of new lava from the depths, with enough lava leaving to prevent too much pressure from building up.

To learn more about the volcano’s deeper dynamics, researchers analyzed data collected by the Hawaiian Volcano Observatory from 2008 to 2018. An array of sensors positioned around the volcano record vibrations and other disturbances. “Once something physically disturbs the magma chamber or the lava lake, it sloshes around, and we can measure that with seismometers,” says Josh Crozier, a former graduate student in Karlstrom’s lab. “Over this decade-long eruption, we detected tens of thousands of such events. We’re combining this data with a physics-based model of processes that creating these signals.”

Just as the sound made by a fork tapping on a drinking glass changes based on the amount of liquid in the glass, or the sound of a drum changes based on its shape, the seismic signals observed around Kīlauea summit encode resonance of magma sloshing in and out of the shallow magma chamber. The characteristics of this resonance, unlike simpler musical instruments, are determined both by the shape and properties of the magma such as temperature and gas content. By carefully examining resonant signals over the entire eruption, the researchers could deduce what was happening inside the volcano without directly probing the hazardous and extreme environment.

“We can actually see gas building up over time and temperature changing without any direct measurements,” Crozier says.

A simple model for effusive volcano eruptions such as at Kīlauea says that magma gets pushed up from depth and spurts out of the volcano, like toothpaste squeezed out of a tube. But in the case of Kīlauea’s 2018 eruption, “we don’t see any signs that there was a big magma influx leading up to eruption,” Crozier says. Instead, the new analysis supports an idea that shallow processes associated with draining of the summit magma chamber down the volcano’s east rift zone, helped shape the big eruption.

It’s too soon to use that information to forecast future eruption behavior, Karlstrom emphasizes. But eventually, it could help scientists make more informed interpretations of the volcano’s seismic signals. “That’s the next step—identifying implications of these variations we found for dynamics and human hazards of the volcano.”


Citation:
The surprising musical dynamics of a lava lake on Kīlauea volcano (2022, June 1)