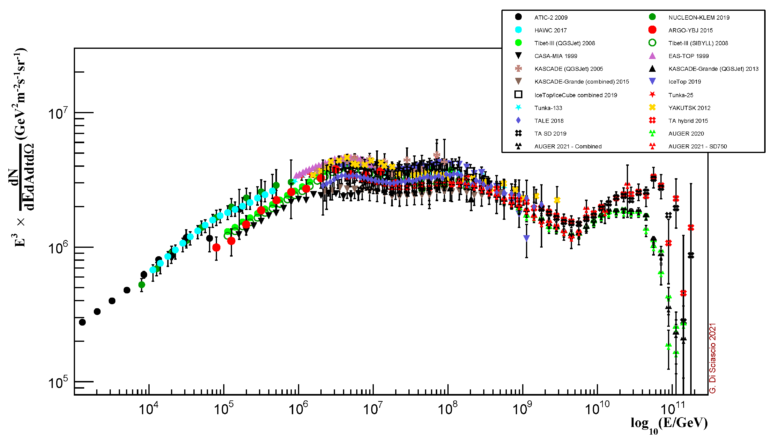 Cosmic rays constitute high-energy protons and atomic nuclei that originate from stars (both within our galaxy and from other galaxies) and are accelerated by supernovae and other high-energy astrophysical objects.

Our current understanding of the Galactic cosmic ray energy spectrum suggests that it follows a power-law dependence, in that the spectral index of protons detected within a certain energy range goes down by power law as energy increases.

But recent observations made using magnetic spectrometers for low energy levels and calorimeters for high energy levels has hinted at a deviation from this power-law variation, with the spectral index of protons becoming larger around an energy of few hundred GeV at energies up to 10 TeV. Following this “spectral hardening,” characterized by a smaller absolute value of the spectral index, a “spectral softening” has been detected above 10 TeV using the CALorimetric Electron Telescope (CALET), a space telescope installed at the International Space Station.

However, better measurements with high statistics and low uncertainty need to be performed over a broad energy spectrum for the confirmation of these spectral structures.

This is exactly what a team of international researchers led by Associate Professor Kazuyoshi Kobayashi from Waseda University in Japan set out to do. “With the data collected by CALET over roughly 6.2 years, we have put forth a detailed spectral structure of the cosmic ray protons. The novelty of our data lies in the high-statistics measurement over a broader energy range of 50 GeV to 60 TeV,” says Kobayashi.

The findings of their study, which included contributions from Professor Emeritus Shoji Torii from Waseda University (PI, or Principal Investigator, of CALET project) and Professor Pier Simone Marrocchesi from University of Siena in Italy, were published in the journal Physical Review Letters.

The new observations confirmed the presence of spectral hardening and softening below and above 10 TeV, suggesting that the proton energy spectrum is not consistent with a single power law variation for the entire range. Moreover, the spectral softening starting at around 10 TeV is consistent with a previous measurement reported by the Dark Matter Particle Explorer (DAMPE) space telescope. Interestingly enough, the transition by spectral softening was found to be sharper than that by spectral hardening.

The variations and the uncertainty in the new CALET data were controlled using Monte Carlo simulations. The statistics was improved by a factor of around 2.2 and the spectral hardening feature was confirmed with a higher significance of more than 20 sigmas.

Talking about the significance of this research, Kobayashi remarks that “this result will significantly contribute to our understanding of cosmic ray acceleration by supernovae and the propagation mechanism of cosmic rays. The next step would be to extend our measurement of the proton spectra to even higher energies with reduced systematic uncertainties. This should be accompanied by a shift in the theoretical understanding to accommodate the new observations.”

It’s not just about cosmic rays, though. Rather, the study goes on to show just how much we still do not understand about our universe, and that it’s worthwhile to ponder over it.