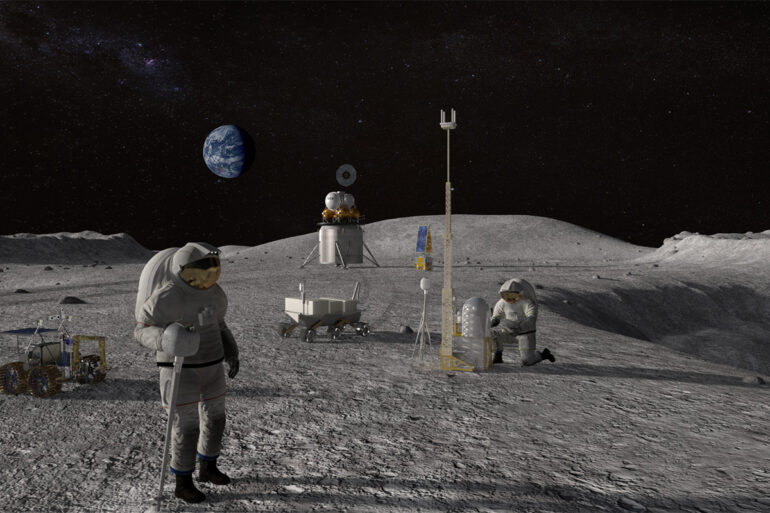 Establishing a moon base will be critical for the U.S. in the new space race and building safe and cost-effective landing pads for spacecraft to touch down there will be key.

These pads will have to stop lunar dust and particles from sandblasting everything around them at more than 10,000 miles per hour as a rocket takes off or lands since there is no air to slow the rocket plume down.

However, how to build these landing pads is not so clear, as hauling materials and heavy equipment more than 230,000 miles into space quickly becomes cost prohibitive.

That’s why University of Central Florida researchers are working on a NASA-funded project to find ways to build lunar landing pads that keep people and equipment safe but are also economical and easy to construct in space. The work is led by defense and space manufacturing company Cislune and includes research from Arizona State University.

The team has found that a method that uses microwaves to melt lunar soil, coupled with UCF-developed beneficiation, or sorting, technology, may be the best option.

The findings were published recently in the journal New Space and in a report submitted to NASA.

“It’s strategically important for our nation to have a presence on the moon because the economic value of the resources in space is very high,” says Phil Metzger, a co-author of the research. He is a planetary scientist at the Florida Space Institute based at UCF.

The U.S. plans to return to the moon as part of the Artemis missions, with the first crewed lunar landing expected to take place as part of Artemis III in 2025. Future missions will establish habitats, resource extraction equipment and more.

Based on an analysis of four different construction methods, including different combinations for inner and outer landing pad rings, a melting—or sintering—method using microwaves was found to be the most cost effective as long as the cost of transportation to the moon remains above $100,000 per kilogram (about $45,000 a pound), according to the new study.

“We’ve shown that we can increase microwave absorption by somewhere in the range of 70% to 80% by sorting particles based on magnetic susceptibility,” Metzger says.

The construction process could be carried out by rovers that would scoop soil, sort it with magnetic fields, layer it back down to the surface, and melt it with microwaves, the researcher says.

The New Space study found that the second-most-cost-effective method when transportation costs are above $100,000 per kilogram would be paver-based landing pads.

Additionally, once transportation costs drop below $100,000 per kilogram, due to economies of scale and rocket reusability, polymer-based landing pads become a more competitive method for constructing the outer part of the landing pad than sintering and pavers.

Each of the methods have trade-offs, such as energy and construction costs, that must be considered, Metzger says.

“The numbers showed us that sintering is actually the best method because it does require some energy, but the cost of the energy is less than the cost of construction and having to bring consumables to the moon,” Metzger says.

“Concrete and steel are used extensively on Earth and have come about from millennia of development and scaling up of industry based upon plentiful water, coal and air,” he says. “On other planets we don’t have any fossil fuels, and air and water are more valuable than gold. Different processes will be required, and UCF and Cislune are working together to solve these problems with innovative solutions like microwave sintering and soil beneficiation.”

For the lunar soil simulant experiments, basaltic glass, bronzite, and ilmenite were found to be some of the most magnetic and microwave susceptible minerals.

How dark matter could be measured in the solar system

“Our results were excellent,” Franks says. “Careful beneficiation makes microwave heating of regolith dramatically more energy efficient, so we just need to bring solar panels and can process the lunar dirt into structures like landing pads and buildings.”

Metzger says the research is not only important for establishing a U.S. presence on the moon but also for maintaining diplomatic relations by not sandblasting other countries’ equipment and facilities.

“I think it’s really crucial for the United States and a consortium of friendly countries that share our values for democracy to lead the way in space to set up methods of sharing space and set up pockets of benefiting the whole world from space, rather than just taking the risk of letting others do it,” Metzger says.

Next steps for the research include developing projects to create improved prototypes of the microwave heating hardware and to test the technology in moon-like conditions in a vacuum.

The co-author of New Space study was Greg Autry with the Thunderbird School of Global Management, Arizona State University. Dhaka Sapkota, an assistant scientist at FSI, led the magnetic beneficiation experiments and co-authored the beneficiation report.