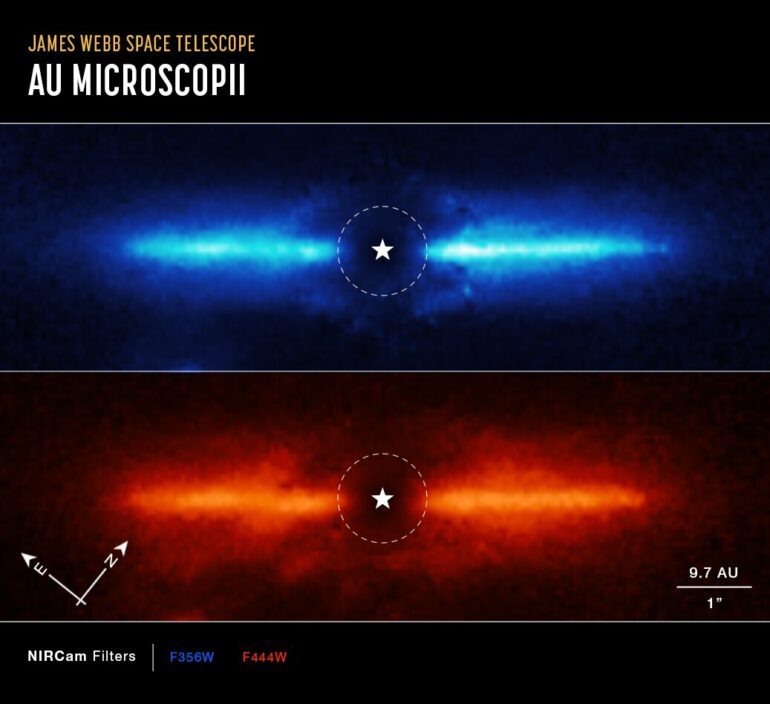 NASA’s James Webb Space Telescope has imaged the inner workings of a dusty disk surrounding a nearby red dwarf star. These observations represent the first time the previously known disk has been imaged at these infrared wavelengths of light. They also provide clues to the composition of the disk.

The star system in question, AU Microscopium or AU Mic, is located 32 light-years away in the southern constellation Microscopium. It’s approximately 23 million years old, meaning that planet formation has ended since that process typically takes less than 10 million years. The star has two known planets, discovered by other telescopes. The dusty debris disk that remains is the result of collisions between leftover planetesimals—a more massive equivalent of the dust in our solar system that creates a phenomenon known as zodiacal light.

“A debris disk is continuously replenished by collisions of planetesimals. By studying it, we get a unique window into the recent dynamical history of this system,” said Kellen Lawson of NASA’s Goddard Space Flight Center, lead author on the study and a member of the research team that studied AU Mic.

“This system is one of the very few examples of a young star, with known exoplanets, and a debris disk that is near enough and bright enough to study holistically using Webb’s uniquely powerful instruments,” said Josh Schlieder of NASA’s Goddard Space Flight Center, principal investigator for the observing program and a study co-author.

The team used Webb’s Near-Infrared Camera (NIRCam) to study AU Mic. With the help of NIRCam’s coronagraph, which blocks the intense light of the central star, they were able to study the region very close to the star. The NIRCam images allowed the researchers to trace the disk as close to the star as 5 astronomical units (460 million miles)—the equivalent of Jupiter’s orbit in our solar system.

The observing program obtained images at wavelengths of 3.56 and 4.44 microns. The team found that the disk was brighter at the shorter wavelength, or “bluer,” likely meaning that it contains a lot of fine dust that is more efficient at scattering shorter wavelengths of light. This finding is consistent with the results of prior studies, which found that the radiation pressure from AU Mic—unlike that of more massive stars—would not be strong enough to eject fine dust from the disk.

While detecting the disk is significant, the team’s ultimate goal is to search for giant planets in wide orbits, similar to Jupiter, Saturn, or the ice giants of our solar system. Such worlds are very difficult to detect around distant stars using either the transit or radial velocity methods.

“This is the first time that we really have sensitivity to directly observe planets with wide orbits that are significantly lower in mass than Jupiter and Saturn. This really is new, uncharted territory in terms of direct imaging around low-mass stars,” explained Lawson.

These results are being presented today in a press conference at the 241st meeting of the American Astronomical Society. The observations were obtained as part of Webb’s Guaranteed Time program 1184.