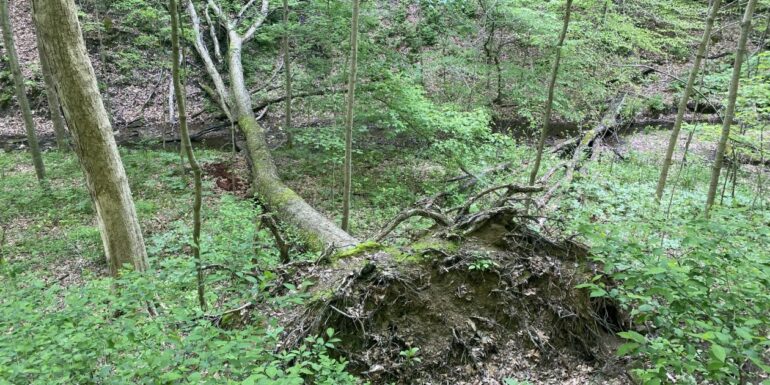 Take a walk in the woods in southern Indiana and you’ll likely come across an uprooted tree, its displaced roots rising above a pit of soil on the hillslopes.

A new study by Indiana University researchers shows that this easily overlooked sight can play a surprisingly useful role for science, serving as a physical record for extreme wind events that are notoriously difficult to measure. By studying high-resolution maps of the forest floor, IU researchers developed a model linking hillslope bumpiness to the frequency of extreme wind, providing new insight into how wind affects forest evolution and how often extreme wind events occur in the area.

The paper is published in the journal Proceedings of the National Academy of Sciences.

“When strong winds cause trees to uproot, they leave a recognizable signature on the forest floor,” said Tyler Doane, a former IU postdoctoral researcher who led the study. “In southern Indiana, we found that the disturbances left by these trees can serve as a reliable proxy for windstorms that occurred over the last decades to centuries.”

Wind-toppled trees, also known as windthrow, play a significant role in shaping the foothills that dot southern Indiana and other parts of the world. Windthrow creates gaps in the forest canopy that affect forests’ structure and their capacity to absorb carbon, an important factor for forests’ abilities to offset climate change. The pit-mound shapes of fallen trees provide habitat for threatened species like salamanders; they also contain loose soil and sediment that migrates downhill and changes the hillslope surface over time.

“If you go out into the woods, you’ll see windthrow everywhere,” said Brian Yanites, a co-author of the study and an associate professor in the IU Bloomington College of Arts and Sciences’ Department of Earth and Atmospheric Sciences. “But only in the last decade have we been able to see a picture of the forest floor that allows us to do this kind of science.”

To conduct the study, researchers used lidar surveys of more than 1,400 hillslopes from Brown County in southern Indiana provided by the U.S. Geological Survey. The topographical surveys use light from a laser to collect measurements and create detailed maps of the landscape, allowing researchers to see high-resolution images of the forest floor stripped of trees. The images reveal undulating ridges pockmarked by the scars of fallen trees.

IU researchers combined this data with wind speed records captured at nearby Morgan-Monroe State Forest’s AmeriFlux tower and a theory they developed that quantifies how the site of a windthrow event smooths out over time. The resulting model allowed the team to pinpoint the most significant factors that affect windthrow and estimate windthrow frequency as well as how much wind trees can withstand.

“Because of the terrain and Indiana wind patterns, trees on east-facing slopes are more susceptible to windthrow,” said Doane, now a postdoctoral researcher with the USGS. “Our model predicts that these extreme wind events occur about once every couple years for any given hillslope in this area. Furthermore, we estimate that the average tree can withstand gusts of about 100 miles an hour, which is about what you might see from the strongest storms that move through the Midwest.”

Climate change adds another layer of complexity to how frequently Hoosiers may observe extreme wind and windthrow in the future. Climate change affects forest composition and has been linked to more frequent drought in the Midwest, potentially lowering trees’ abilities to withstand strong gusts. But unlike temperature and precipitation patterns, little is known about how climate change influences extreme wind.

“Given forests’ significant role in absorbing atmospheric carbon, these are important outstanding questions that can be better explored using our framework,” Doane said.