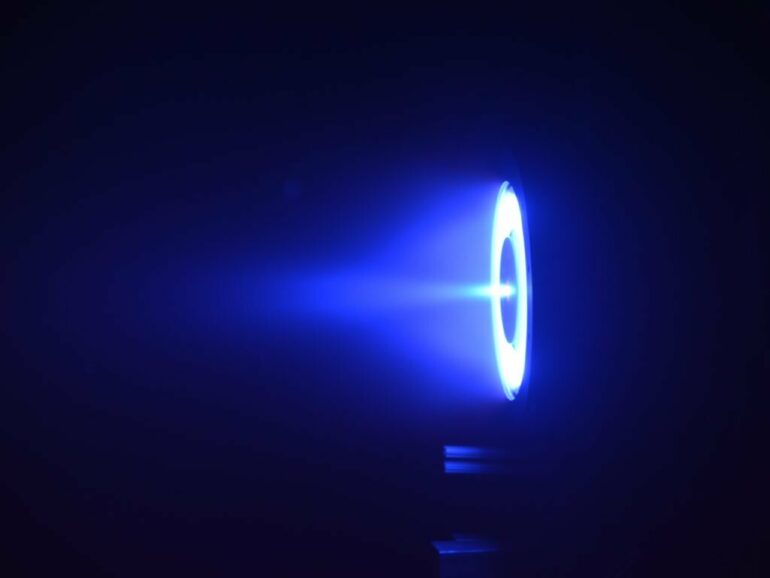 It has been believed that Hall thrusters, an efficient kind of electric propulsion widely used in orbit, must be large to produce a lot of thrust. Now, a new study from the University of Michigan suggests that smaller Hall thrusters can generate much more thrust—potentially making them candidates for interplanetary missions.

“People had previously thought that you could only push a certain amount of current through a thruster area, which in turn translates directly into how much force or thrust you can generate per unit area,” said Benjamin Jorns, U-M associate professor of aerospace engineering who led the new Hall thruster study to be presented at the AIAA SciTech Forum in National Harbor, Maryland, today.

His team challenged this limit by running a 9 kilowatt Hall thruster up to 45 kilowatts, maintaining roughly 80% of its nominal efficiency. This increased the amount of force generated per unit area by almost a factor of 10.

Whether we call it a plasma thruster or an ion drive, electric propulsion is our best bet for interplanetary travel—but science is at a crossroads. While Hall thrusters are a well-proven technology, an alternative concept, known as a magnetoplasmadynamic thruster, promises to pack much more power into smaller engines. However, they are yet unproven in many ways, including lifetime.

Hall thrusters were believed to be unable to compete because of the way they operate. The propellant, typically a noble gas like xenon, moves through a cylindrical channel where it is accelerated by a powerful electric field. It generates thrust in the forward direction as it departs out the back. But before the propellant can be accelerated, it needs to lose some electrons to give it a positive charge.

Electrons accelerated by a magnetic field to run in a ring around that channel—described as a “buzz saw” by Jorns—knock electrons off the propellant atoms and turn them into positively charged ions. However, calculations suggested that if a Hall thruster tried to drive more propellant through the engine, the electrons whizzing in a ring would get knocked out of the formation, breaking down that “buzz saw” function.

“It’s like trying to bite off more than you can chew,” Jorns said. “The buzz saw can’t work its way through that much material.”

In addition, the engine would become extremely hot. Jorns’ team put these beliefs to the test.

“We named our thruster the H9 MUSCLE because essentially, we took the H9 thruster and made a muscle car out of it by turning it up to ’11’—really up to a hundred, if we’re going by accurate scaling,” said Leanne Su, a doctoral student in aerospace engineering who will present the study.

They tackled the heat problem by cooling it with water, which let them see how big a problem the buzz saw breakdown was going to be. Turns out, it wasn’t much trouble. Running with xenon, the conventional propellant, the H9 MUSCLE ran up to 37.5 kilowatts, with an overall efficiency of about 49%, not far off the 62% efficiency at its design power of 9 kilowatts.

Running with krypton, a lighter gas, they maxed out their power supply at 45 kilowatts. At an overall efficiency of 51%, they achieved their maximum thrust of about 1.8 Newtons, on par with the much larger 100-kilowatt-class X3 Hall thruster.

“This is kind of a crazy result because typically, krypton performs a lot worse than xenon on Hall thrusters. So it’s very cool and an interesting path forward to see that we can actually improve krypton’s performance relative to xenon by increasing the thruster current density,” Su said.

Nested Hall thrusters like the X3—also developed in part by U-M—have been explored for interplanetary cargo transport, but they are much larger and heavier, making it difficult for them to transport humans. Now, ordinary Hall thrusters are back on the table for crewed journeys.

Jorns says that the cooling problem would need a space-worthy solution if Hall thrusters are to run at these high powers. Still, he is optimistic that individual thrusters could run at 100 to 200 kilowatts, arranged into arrays that provide a megawatt’s worth of thrust. This could enable crewed missions to reach Mars even on the far side of the sun, traveling a distance of 250 million miles.

The team hopes to pursue the cooling problem as well as challenges in developing both Hall thrusters and magnetoplasmadynamic thrusters on Earth, where few facilities can test Mars-mission-level thrusters. The amount of propellant exhausting from the thruster comes too fast for the vacuum pumps to keep the conditions inside the testing chamber space-like.


Citation:
Plasma thrusters used on satellites could be much more powerful than previously believed (2023, January 24)