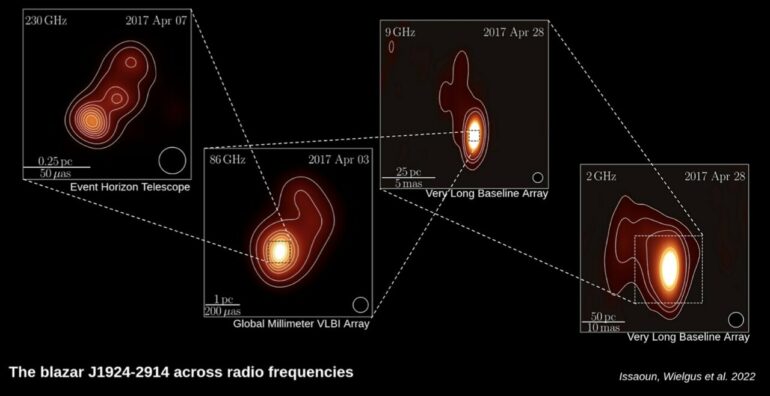 Scientists at the Event Horizon Telescope (EHT) have imaged the distant blazar J1924-2914 with unprecedented angular resolution, revealing previously unseen details of the source structure. Blazars are powerful active galactic nuclei, in which supermassive black holes eject relativistic jets directed along our line of sight. A blazar can outshine its entire galaxy and may be observed from a distance of billions of light-years with our radio telescopes.

The images reveal a helically bent jet emerging from a compact quasar core. A study of the source across different angular scales was enabled by nearly simultaneous observations across the radio frequency band—the EHT, operating at 230 GHz, the Global Millimeter VLBI Array, operating at 86 GHz, and the Very Long Baseline Array operating at 2.3 and 8.7 GHz. The study is published in The Astrophysical Journal.

EHT scientists managed to map the linearly polarized emission in the inner part of the J1924-2914 quasar. “Our images constitute the highest angular resolution images of polarized emission from a quasar ever obtained,” says Sara Issaoun, NHFP Einstein Fellow at the Harvard & Smithsonian Center for Astrophysics in Cambridge, Massachusetts and lead of this study. “We see interesting details in the strongly polarized innermost core of the source; the morphology of the polarized emission is hinting at the presence of a twisted magnetic field structure,” adds Sara.

Understanding the emission in J1924-2914 was also very important for the recently published EHT observations of Sagittarius A*, the supermassive black hole in the center of our own galaxy. “J1924-2914 is our main calibrator for the Sagittarius A* studies—this means that we needed to understand it really well, so that we could use this knowledge to improve total intensity and polarimetric calibration of the more difficult, time-variable source that is Sagittarius A*,” said Maciek Wielgus, a scientist at the Max Planck Institute for Radio Astronomy in Bonn, Germany, co-leading this study.

The EHT offers the capability to image active galactic nuclei at the shortest radio wavelengths (about 1.3 mm) and at the highest angular resolution ever achieved in astronomy, corresponding to observing an orange on the surface of the Moon from Earth. These properties make the EHT an ideal instrument to study the innermost regions of the jets, and to advance our knowledge of how they are formed and accelerated. Future observations of the EHT will bring images of many more sources while pushing boundaries in observing wavelength and resolution.