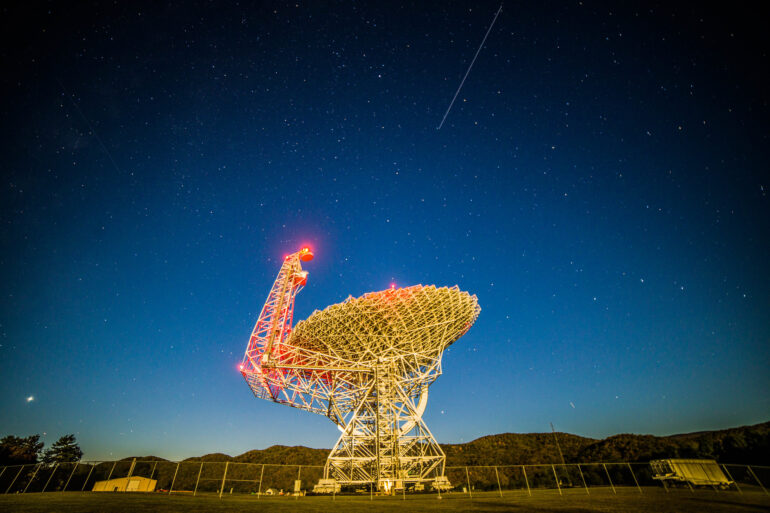 In a new paper studying the galaxy cluster MS0735, “We’re looking at one of the most energetic outbursts ever seen from a supermassive black hole,” says Jack Orlowski-Scherer, lead author on this publication, “This is what happens when you feed a black hole and it violently burps out a giant amount of energy.” At the time of the study, Jack was a graduate student at the University of Pennsylvania, and is now a research fellow at McGill University in Montreal, Quebec.

Supermassive black holes are found deep within the centers of the enormous galaxies at the heart of galaxy clusters. The plasma filled atmospheres of galaxy clusters are unbelievably hot—about 50 million degrees celsius—but these hot temperatures usually cool over time, allowing new stars to form. Sometimes, the black hole reheats the gas surrounding it through violent outbursts jetting from its center, preventing cooling and star formation, in a process called feedback.

These powerful jets carve out immense cavities within the hot cluster medium, pushing that hot gas farther from the cluster center and replacing it with radio-emitting bubbles. Displacing such a large volume of gas requires an enormous amount of energy (several percent of the total thermal energy in the cluster gas), and understanding where this energy comes from is of great interest to astrophysicists. By learning more about what’s left behind filling in these cavities, astronomers can begin to deduce what caused them in the first place.

The team of astronomers used the MUSTANG-2 receiver on the GBT to image MS0735 using the Sunyaev-Zeldovich (SZ) effect, a subtle distortion of the cosmic microwave background (CMB) radiation due to scattering by hot electrons in the cluster gas. For context, the CMB was emitted 380 thousand years after the Big Bang, and is the afterglow of the origin of our universe 13.8 billion years ago. Around 90 GHz, where MUSTANG-2 observes, the SZ effect signal primarily measures thermal pressure.

“With the power of MUSTANG-2, we are able to see into these cavities and start to determine precisely what they are filled with, and why they don’t collapse under pressure,” elaborates Tony Mroczkowski, an astronomer with the European Southern Observatory who was part of this new research.

These new findings are the deepest high-fidelity SZ imaging yet of the thermodynamic state of cavities in a galaxy cluster, reinforcing previous discoveries that at least a portion of the pressure support in the cavities is due to non-thermal sources, such as relativistic particles, cosmic rays, and turbulence, as well as a small contribution from magnetic fields.

“We knew this was an exciting system when we studied the radio core and lobes at low frequencies, but we are only now beginning to see the full picture,” explains co-author Tracy Clarke, an astronomer at the U.S. Naval Research Laboratory and VLITE Project Scientist who co-authored a previous radio study of this system.

In contrast to earlier research, new imaging produced by the GBT considers the possibility that the pressure support within the bubbles could be more nuanced than previously thought, mixing both thermal and non-thermal components. In addition to the radio observations, the team incorporated existing X-ray observations from NASA’s Chandra X-ray Observatory, which provide a complementary view of the gas seen by MUSTANG-2.

Future observations across multiple frequencies can establish more precisely the nature of how exotic the black hole eruption is. “This work will help us better understand the physics of galaxy clusters, and the cooling flow feedback problem that has vexed many of us for some time,” adds Orlowski-Scherer.

This work is published in the latest issue of the journal of Astronomy & Astrophysics.