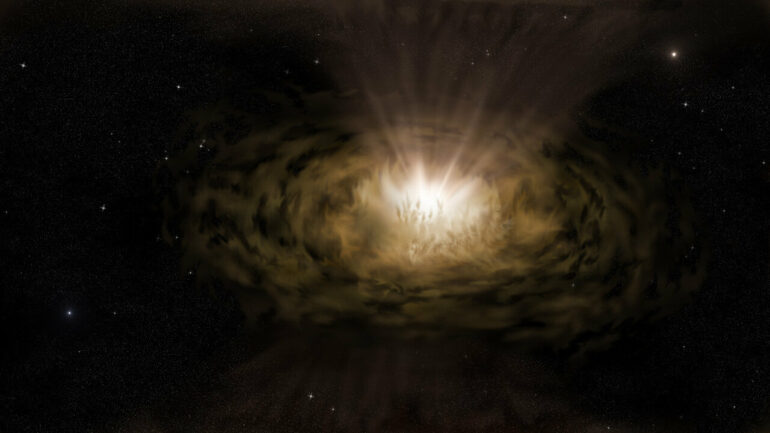 Powered by supermassive black holes swallowing matter in the centers of galaxies, active galactic nuclei are the most powerful compact steady sources of energy in the universe. The brightest active galactic nuclei have long been known to far outshine the combined light of the billions of stars in their host galaxies.

A new study indicates that scientists have substantially underestimated the energy output of these objects by not recognizing the extent to which their light is dimmed by dust.

“When there are intervening small particles along our line of sight, this makes things behind them look dimmer. We see this at sunset on any clear day when the sun looks fainter,” said Martin Gaskell, a research associate in astronomy and astrophysics at UC Santa Cruz.

Gaskell is lead author of a paper on the new findings published January 16 in Monthly Notices of the Royal Astronomical Society.

Although the possibility of dust dimming the light from active galactic nuclei has been recognized for a long time, the amount was controversial and was widely believed to be negligible, he said.

“We have shown that this is not the case and that the far ultraviolet light of a typical active galactic nucleus is dimmed by a large factor,” Gaskell said.

The team reached this conclusion by studying the reddening effect of dust on the light from one of the most well-studied active galactic nuclei, known as NGC 5548. Just as the Earth’s atmosphere makes the sun appear redder as well as dimmer at sunset, so dust in active galactic nuclei also makes them appear redder than they really are. The amount of reddening is related to the amount of dimming.

In the new study of NGC 5548, the UCSC researchers used seven different indicators of the amount of dust and found them all to be in good agreement. Furthermore, the dimming of NGC 5548 due to dust was found to be large, more than ten times the dimming caused by dust as we look out of our own galaxy, the Milky Way.

“The good agreement between the different indicators of the amount of reddening was a pleasant surprise,” said Gaskell. “It strongly supports simple theories of emission from active galactic nuclei. Exotic explanations of colors are not needed. This makes life simpler for researchers and is speeding up our understanding of what happens as black holes swallow material.”

The colors of NGC 5548 are typical of other active galactic nuclei, he said, which has wide-ranging implications. Because of the dimming effects of dust, active galactic nuclei are even more powerful than had been realized. The results imply that in the ultraviolet, where most of the energy is radiated, a typical active galactic nucleus is putting out an order of magnitude more energy than previously thought, Gaskell said.

Another implication, he said, is that active galactic nuclei are very similar, and what had hitherto been thought to be major fundamental differences between them are really just the consequences of different amounts of reddening by dust.

More information:
Estimating reddening of the continuum and broad-line region of active galactic nuclei: the mean reddening of NGC 5548 and the size of the accretion disc, Monthly Notices of the Royal Astronomical Society (2023).