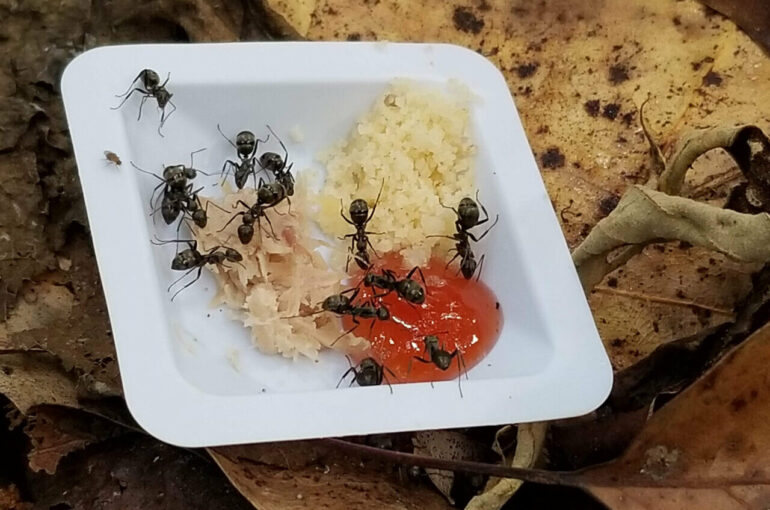 Ants are ectotherms—animals whose body temperature depends on the environment. While these animals experience a range of temperatures in daily life, most ectotherms prefer habitats that are slightly cooler than the so-called optimal functioning temperature in which an ectothermic animal is able to best perform all of life’s functions. If it encounters an environment warmer than the optimal point, an ectotherm risks approaching the lethal end of its physiology’s spectrum. In other words, if it gets too hot, ectotherms will die.

Little is known, however, about how—or if—insect ectotherms will adjust their behavior to avoid warmer but sublethal temperature ranges—where functioning is physiologically possible but not optimal—which are increasingly likely due to global climate change.

To learn more about how insect species may respond to those warmer, sublethal temperatures, researchers at NC State studied five species of ants common in North Carolina. The researchers counted and collected ants in forest ecosystems and measured air temperatures at the collection sites to identify the distribution of available microhabitats. The researchers also used a unique ant thermometer to measure the temperature of the ants themselves (which varied by ant color and body size). Lastly, to determine each species’ preferred temperature, the researchers collected some ants for the lab and placed them in a rectangular chamber with a controlled temperature gradient.

The researchers found that ants in the lab did have distinct thermal preferences, but ants in the field were active in their preferred climates only slightly more often than expected by chance. Instead, most species were collected in sites that were warmer than preferred, suggesting lack of awareness or some limitation in their ability to adjust to increasing temperatures.

“It’s interesting that the worker ants we observed were willing to put themselves in uncomfortable situations while foraging,” says Sara Prado, an adjunct professor and co-author of the study. “I wonder if the food was ‘profitable’ enough for the ants to stretch their comfort levels, or if they are simply willing to sacrifice their well-being for the sake of the colony.”

“Warmer times and places make warmer ants, and they’re not adjusting their activity to match their preferred conditions,” says Elsa Youngsteadt, a professor of applied ecology at NC State and co-author of the study. “For now, this may be a tradeoff that works out fine for them. But if you think of the huge biomass of ants underfoot, their metabolic rates are all creeping upward as the climate changes. Even if it doesn’t kill them outright, what does that amped-up metabolism mean for their life cycle and even the whole forest ecosystem?”

Youngsteadt plans to further investigate this question with urban ants that are effectively living in the future of climate change in comparatively warm cities.

The paper, “Can behavior and physiology mitigate effects of warming on ectotherms? A test in urban ants,” will be published January 16 in the Journal of Animal Ecology.

Photos suggest rhino horns have shrunk over past century, likely due to hunting