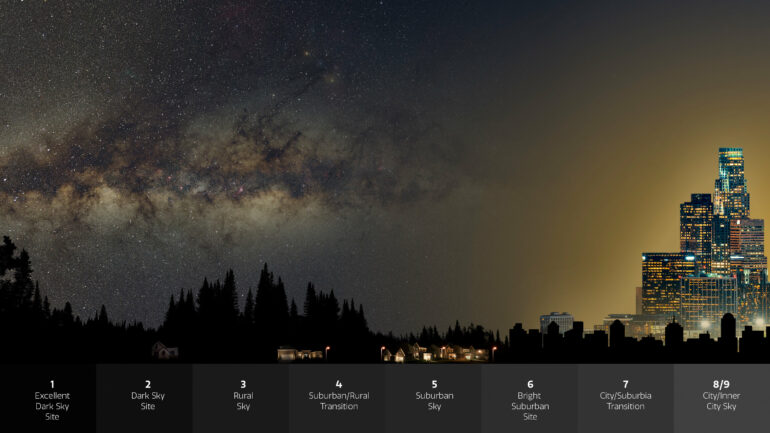 People around the world are seeing fewer and fewer stars in the night sky. The change in star visibility can be explained by an increase in the sky brightness of 7–10% per year. The rate of change is faster than satellite measurements of artificial light emissions on Earth would at first suggest.

This is the finding of a study published in the journal Science, conducted by a research group led by Christopher Kyba of the GFZ German Research Center for Geosciences and the Ruhr-Universität Bochum with colleagues from the GFZ and the U.S. National Science Foundation’s NOIRLab.

They analyzed more than 50,000 naked-eye observations by citizen scientists around the world from 2011 to 2022 as part of the “Globe at Night” Citizen Science Project. The results show that citizen science data are an important supplement to previous measurement methods.

Over a large part of the Earth’s land surface, the sky continues to glow with an artificial twilight long after sunset. This “skyglow” is a form of light pollution that has serious effects on the environment and should therefore be the focus of research, as Constance Walker, co-author of the study and head of the Globe at Night project of NSF’s NOIRLab since its inception, emphasizes.

After all, many behaviors and physiological processes of living creatures are determined by daily and seasonal cycles—and thus influenced by light. “Skyglow affects both diurnal and nocturnal animals and also destroys an important part of our cultural heritage,” says Walker. The appearance of the night sky is changing, with negative effects on stargazing and astronomy.

The change in skyglow over time has not previously been measured globally. While it could in principle be measured by satellites, the only current sensors that monitor the entire Earth do not have sufficient accuracy or sensitivity.

A promising approach is therefore to use the observational power of people using the human eye as a sensor, and in doing so—within the framework of Citizen Science experiments—to rely on the power of the crowd. The “Globe at Night” project, initiated by the U.S. National Science Foundation’s NOIRLab, has been running since 2006. People all over the world can participate in this project.

Participants look at their night sky, and then report which of a set of eight star charts best matches what they see using an online form. Each chart shows the sky under different levels of light pollution.

“The contributions of individual people work together as if they were a global sensor network, making new science possible,” says Christopher Kyba from the GFZ German Research Center for Geosciences in Potsdam and the Ruhr University Bochum. Together with his GFZ colleague Yigit Öner Altıntas and Constance E. Walker and Mark Newhouse from NOIRLab, he has analyzed data from 51,351 participants around the world taken on cloud- and moon-free nights between 2011 and 2022. They were obtained from 19,262 locations worldwide, including 3,699 locations in Europe and 9,488 locations in North America.

In order to calculate a rate of change in sky brightness from this data and to take into account that the observers were also at different locations over the years, they made use of a global model for sky brightness based on satellite data from 2014.

“The rate at which stars are becoming invisible to people in urban environments is dramatic,” sums up Christopher Kyba, lead author of the study. The researchers found that the change in the number of visible stars can be explained by increases in night sky brightness. In Europe, they found a 6.5% increase in brightness per year matched the data; in North America, it’s 10.4%.

To put these numbers into a more understandable context, Kyba explains the consequences for seeing stars in a place with a 9.6% per year increase, which was the average over all locations worldwide. “If the development were to continue at that rate, a child born in a place where 250 stars are visible will only be able to see 100 stars there on his 18th birthday.”

Based on the slower growth in upward emissions seen in satellite data, the researchers were surprised by the speed of this development in skyglow. In fact, for the locations of the observers, the artificial brightness measured by satellite had slightly decreased (by 0.3% per year in Europe, by 0.8% in North America).

Causes for the difference between measurements from Earth and from space

Christopher Kyba believes that the difference between human observation and satellite measurements is probably due to changes in lighting practices. “Satellites are most sensitive to light that is directed upwards towards the sky. But it is horizontally emitted light that accounts for most of the skyglow,” Kyba explains. “So, if advertisements and facade lighting become more frequent, bigger or brighter, they could have a big impact on skyglow without making much of a difference on satellite imagery.”

Another factor the authors cite is the widespread switch from orange sodium vapor lamps to white LEDs, which emit much more blue light. “Our eyes are more sensitive to blue light at night, and blue light is more likely to be scattered in the atmosphere, so contributes more to skyglow,” Kyba says. “But the only satellites that can image the whole Earth at night are not sensitive in the wavelength range of blue light.”

Limits of the study and further potential

However, the Citizen Science approach also has its limitations. For example, the number of participants from different regions of the world determines the significance of spatial and temporal trends. So far people from North America and Europe have had the largest participation in the experiment, and half of the Asian contributions come from a single country: Japan.

“The most data comes from the regions of Earth where skyglow is currently most prevalent. That’s useful, but it means that we can’t say much about skyglow change in regions with few observations,” Kyba emphasizes. Especially in developing countries, rapid changes in artificial skyglow are suspected, but there have been few observations so far.

The researchers draw two main conclusions from their findings: On the one hand, they show that current lighting policies, such as the use of LEDs, have not yet brought about any improvement, at least on a continental level, despite growing awareness of light pollution.

“And on the other hand, we were able to demonstrate that the Citizen Science data represent an important supplement to the previous measurement methods,” Kyba says.

Constance Walker adds, “If we had broader participation, we could identify trends for other continents, and possibly even for individual states and cities. The project is ongoing, so feel free to take a look tonight and let us know what you see.”

Further information on “Globe at Night” can be found here.