Volcanic activity may be the cause of marsquakes 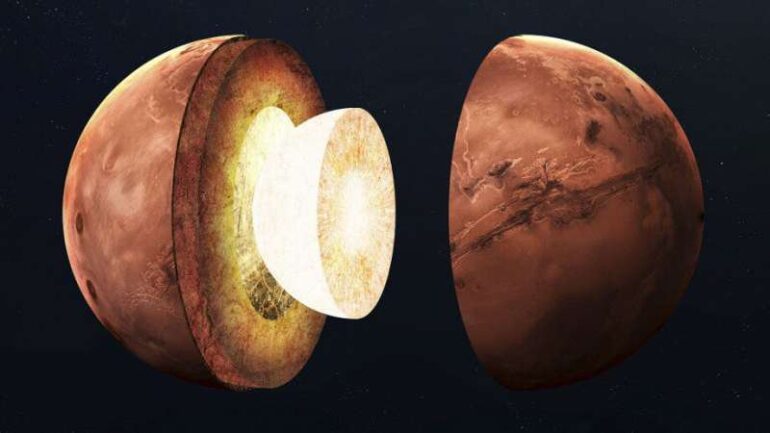 Volcanic activity beneath the surface of Mars could be responsible for triggering repetitive Marsquakes, which are similar to earthquakes, in a specific region of the Red Planet, researchers from The Australian National University (ANU) suggest.

New research published in Nature Communications shows scientists from ANU and the Chinese Academy of Sciences in Beijing have discovered 47 previously undetected Marsquakes beneath the Martian crust in an area called Cerberus Fossae—a seismically active region on Mars that is less than 20 million years old.

The authors of the study speculate that magma activity in the Martian mantle, which is the inner layer of Mars sandwiched between the crust and the core, is the cause of these newly detected Marsquakes.

The findings suggest magma in the Martian mantle is still active and is responsible for the volcanic Marsquakes, contrary to past beliefs held by scientists that these events are caused by Martian tectonic forces.

According to geophysicist and co-author Professor Hrvoje Tkalčić, from the ANU Research School of Earth Sciences, the repetitive nature of these quakes and the fact they were all detected in the same area of the planet suggests Mars is more seismically active than scientists previously thought.

“We found that these Marsquakes repeatedly occurred at all times of the Martian day, whereas Marsquakes detected and reported by NASA in the past appeared to have occurred only during the dead of night when the planet is quieter,” Professor Tkalčić said.

“Therefore, we can assume that the movement of molten rock in the Martian mantle is the trigger for these 47 newly detected Marsquakes beneath the Cerberus Fossae region.”

“Knowing that the Martian mantle is still active is crucial to our understanding of how Mars evolved as a planet,” he said.

“It can help us answer fundamental questions about the solar system and the state of Mars’ core, mantle and the evolution of its currently-lacking magnetic field.”

The researchers used data collected from a seismometer attached to NASA’s InSight lander, which has been collecting data about Marsquakes, Martian weather and the planet’s interior since landing on Mars in 2018.

Using a unique algorithm, the researchers were able to apply their techniques to the NASA data to detect the 47 previously undiscovered Marsquakes.

The study authors say while the quakes would have caused some shaking on Mars, the seismic events were relatively small in magnitude and would barely be felt if they had occurred on Earth. The quakes were detected over a period of about 350 sols—a term used to refer to one solar day on Mars—which is equivalent to about 359 days on Earth.

According to Professor Tkalčić, the Marsquake findings could help scientists figure out why the Red Planet no longer has a magnetic field.

“The Marsquakes indirectly help us understand whether convection is occurring inside of the planet’s interior, and if this convection is happening, which it looks like it is based off our findings, then there must be another mechanism at play that is preventing a magnetic field from developing on Mars,” he said.

“All life on Earth is possible because of the Earth’s magnetic field and its ability to shield us from cosmic radiation, so without a magnetic field life as we know it simply wouldn’t be possible.

“Therefore, understanding Mars’ magnetic field, how it evolved, and at which stage of the planet’s history it stopped is obviously important for future missions and is critical if scientists one day hope to establish human life on Mars.”


Citation:
Volcanic activity may be the cause of marsquakes (2022, April 1)