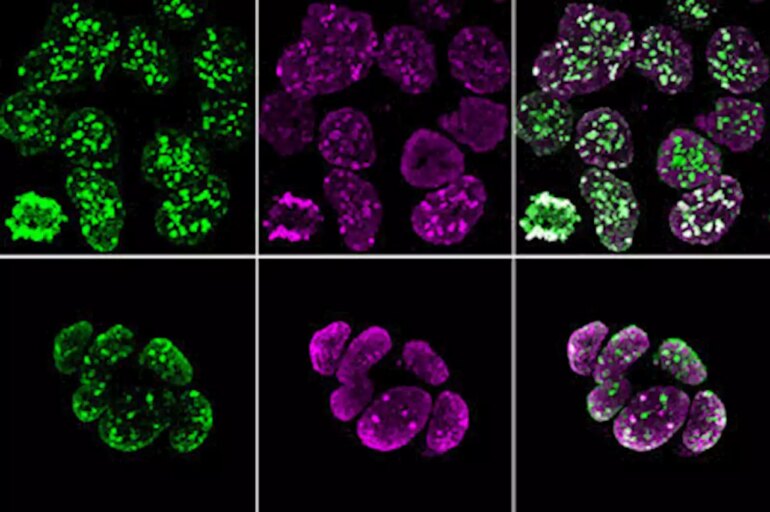 RIKEN biologists have mapped out key features of the chromosomal landscape that lock in the identity of stem cells that give rise to the mouse placenta. This could aid research into placental function and reproductive medicine.

The placenta is a unique organ in many ways. It is only found in mammals, forms only during pregnancy, and is discarded after serving its purpose. This distinctiveness can be traced backed to the stem cells that it develops from. Known as trophoblast stem cells (TSCs), they exhibit very different characteristics from those that form the embryo.

Indeed, TSCs are one of very few cell types that cannot be employed for somatic cell nuclear transfer—a standard procedure for generating clones by implanting the nucleus from a donor cell into an oocyte whose own nucleus has been removed.

“I’ve long been interested in the process that gives rise to TSCs,” says Atsuo Ogura of the RIKEN BioResource Research Center. “They diverge from embryonic lineage cells as early as a few days after fertilization, develop independently, and terminate their role at birth.”

Chromosomal DNA is wrapped around complexes of histone proteins, forming material known as chromatin. The organization and chemical properties of this chromatin can profoundly affect gene expression. Ogura and colleagues therefore set out to examine whether the features of TSC chromatin might contribute to these cells’ distinctive identity and their incompatibility with somatic cell nuclear transfer.

The researchers performed a comparative analysis of chromatin in embryonic stem cells and TSCs of mice. They looked at the distribution of chromatin structures as well as at the patterns of histone methylation, a chemical modification with a particularly important influence on local transcriptional activity.

Intriguingly, the team noted that the chromosomes of both early embryonic and trophoblastic precursors are initially enriched with heterochromatin, a densely-packed form of chromatin, and exhibit a distinctive methylation profile.

But whereas TSCs retain these characteristics, Ogura notes “embryonic lineage cells reprogram these regions after implantation to enable diverse differentiation.”

However, when the researchers subjected TSCs to a genetic manipulation that altered their histone methylation profile, the nuclei from these cells suddenly proved amenable to somatic cell nuclear transfer. These results, published in Genes & Development, thus confirm the importance of these chromosomal modifications as a determinant of TSC identity.

There is considerable interest in developing better strategies for cultivating TSCs, both in research and reproductive medicine. By better understanding the features that define these cells during natural embryonic development, Ogura anticipates the possibility of generating lab-grown TSCs that can seamlessly integrate into functional placental tissue.