A virtual agent that can negotiate with humans 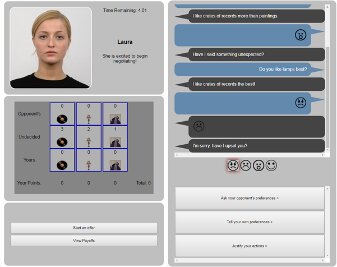 Negotiations are a central part of many human interactions, ranging from business discussions and legal proceedings to conversations with vendors at local markets. Researchers specialized in economics, psychology, and more recently, computer science have conducted several studies aimed at better understanding how humans negotiate with one another in the hope of shedding light on some of the dynamics of human decision-making and enabling the development of machines that can replicate these dynamics.

A research team at the University of Southern California has been exploring the possibility of building automated systems that can negotiate with humans. In a paper pre-published on arXiv and set to be presented at the IJCAI conference, they presented a virtual agent based on a framework called IAGO (Interactive Arbitration Guide Online), which can negotiate with humans in a three-round negotiation task. This virtual agent, called Pilot, is of the finalists of the IJCAI conference’s global negotiation challenge (ANAC).

“Recently, researchers realized the potential applications of building automated systems that can negotiate with humans,” Kushal Chawla, one of the researchers who carried out the study, told TechXplore. “These intelligent assistants can be really useful to augment current techniques for training people to have stronger social skills. Examples include teaching business students to negotiate for successful deals or lawyers to accurately assess settlement rates in legal proceedings.”

Past research has already highlighted the importance of negotiation skills for advancing the capabilities of both existing and newly developed AI assistants. For example, Google developed the prototype of a virtual assistant called Google Duplex, which can engage in simple negotiations, for instance booking haircut appointments for human users over the phone. Pilot, the new system created by Chawla and his advisor Gale Lucas, was designed to participate in a sequence of three negotiations with an individual human partner.

“Our primary research question was: ‘Do we behave differently with AI systems and other humans? And if yes, in what ways?” Chawla said. “Pilot is our attempt to incorporate decades of human-human negotiation research into building automated negotiation systems. While there is already evidence that some of the effects observed in human-human negotiations are also visible in human-agent settings, Pilot allows us to study their interaction effects and the extent to which the two settings are similar or different.”

When developing their virtual agent, Chawla and Lucas built on previous psychological studies exploring human personality traits and how they relate to the way in which different people negotiate with others and try to attain more favorable outcomes. Their system was designed to perform well in the ANAC competition.

During this competition, a number of common objects (e.g., books, paintings, clocks, etc.) are placed on a table. Each of these items is given a specific priority value, which may be different for each negotiator. Two parties then engage in three negotiations back-to-back, which are aimed at deciding who gets each of the objects at the end of each trial. In the researchers’ experiments, these negotiations involved a human user and Pilot, the virtual agent they developed.

“Previous editions of the ANAC competition have seen agents struggle with the trade-off between the total number of points scored and the perception of the agent in the eyes of the opponent, both of which are important metrics in a negotiation,” Chawla said. “Whether the opponent likes the agent is especially important now, since the agents engage in a repeated negotiation with a human partner, unlike during earlier editions of the ANAC competition.”

In the latest version of the ANAC challenge, a negative relationship with a human negotiator at the beginning of the task can adversely impact an agent’s performance in the following negotiation rounds. With this in mind, Chawla and Lucas made Pilot highly competitive, but also ensured that it was able to build a positive rapport with humans using text messages and emotional facial expressions.

During the three-round ANAC task, Pilot typically tries to lead the negotiation by continuously rolling out offers. Meanwhile, it also guides human partners and offers its assistance, using simple sentences such as “let me help you out.”

“A key characteristic of Pilot is the effective use of favor exchange,” Chawla said. “Repeated negotiations provide the opportunity to indulge in favor exchange with the human, where a favor accepted in the current negotiation can be paid back in the upcoming ones. However, prior work shows that whether the favor request is fruitful or not depends on the personality of the partner such as their social value orientation, a feature that captures how cooperatively an individual is expected to approach the negotiation.”

“As an attempt to circumvent this problem, we leverage prior work in psychology which suggests that framing (or strategic textual messages) can help to promote cooperative behavior in humans,” Chawla explained. “Pilot leverages this research to make favor exchange more likely and productive, and hence, end up with a better deal.”

The virtual agent developed by Chawla and Lucas can analyze whether effects that were previously studied independently can also be observed together during agent-human negotiations. For instance, while researchers know that strong negative emotions can lead to more concessions from a partner and positive textual framing can promote cooperative behavior, Pilot could be used to explore whether this effect still holds when an agent combines these strategies, or if the interplay between them cancels out their respective benefits.

“Understanding this behavior is crucial for analyzing the extent to which prior work can benefit human-agent negotiations, potentially directing future research in building AI assistants capable of negotiating,” Chawla said. “Based on initial rankings of the ANAC competition, our platform appears to be promising. However, we will wait for the final results and post-analysis to shed further light on Pilot’s performance.”

Microsoft Teams: This new look for your video meetings has now arrived

The team hopes that their research will eventually help to enhance human interactions with AI assistants, both in professional and residential settings. As he works toward completing his Ph.D. at the University of Southern California, Chawla plans to explore ways in which automated systems could be programmed to carry out negotiations in a free-form natural language (e.g., in English) rather than via a menu-driven platform such as the one currently used by Pilot.

“Imagine an assistant that can converse with you to understand your preferences (for instance, in terms of costs, convenience and availability) and then negotiate on your behalf to find the best possible alternative,” Chawla said. “Incorporating additional modalities, such as text, images, or videos, helps to better capture the complexities of a real-world negotiation such as emotion expression, persuasion strategies or even facial expressions, making these systems far more useful for all the downstream applications in pedagogy and conversational AI.”

When bots do the negotiating, humans more likely to engage in deceptive techniques

Citation:
Pilot: A virtual agent that can negotiate with humans (2020, October 15)
retrieved 15 October 2020
from https://techxplore.com/news/2020-10-virtual-agent-humans.html