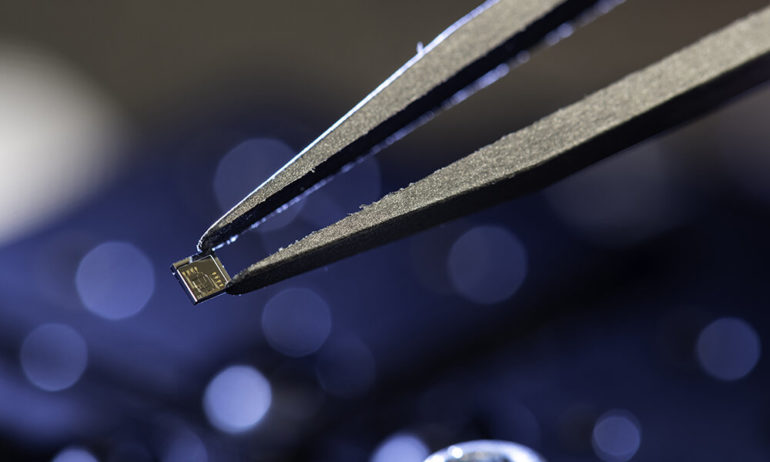 By merging two or more sources of light, interferometers create interference patterns that can provide remarkably detailed information about everything they illuminate, from a tiny flaw on a mirror, to the dispersion of pollutants in the atmosphere, to gravitational patterns in far reaches of the Universe.

“If you want to measure something with very high precision, you almost always use an optical interferometer, because light makes for a very precise ruler,” says Jaime Cardenas, assistant professor of optics at the University of Rochester.

Now, the Cardenas Lab has created a way to make these optical workhorses even more useful and sensitive. Meiting Song, a Ph.D. student, has for the first time packaged an experimental way of amplifying interferometric signals—without a corresponding increase in extraneous, unwanted input, or “noise”—on a 1 mm by 1 mm integrated photonic chip. The breakthrough, described in Nature Communications, is based on a theory of weak value amplification with waveguides that was developed by Andrew Jordan, a professor of physics at Rochester, and students in his lab.

“Basically, you can think of the weak value amplification technique as giving you amplification for free. It’s not exactly free since you sacrifice power, but it’s almost for free, because you can amplify the signal without adding noise—which is a very big deal,” Cardenas says.

Weak value amplification is based on the quantum mechanics of light, and basically involves directing only certain photons that contain the information needed, to a detector. The concept has been demonstrated before, “but it’s always with a large setup in a lab with a table, a bunch of mirrors and laser systems, all very painstakingly and carefully aligned,” Cardenas says.

“Meiting distilled all of this and put it into a photonic chip,” Cardenas says. “And by having the interferometer on a chip, you can put it on a rocket, or a helicopter, in your phone—wherever you want—and it will never be misaligned.”

The device Song created does not look like a traditional interferometer. Instead of using a set of tilted mirrors to bend light and create an interference pattern, Song’s device includes a waveguide engineered to propagate the wavefront of an optical field through the chip.

“This is one of the novelties of the paper,” Cardenas says. “No one has really talked about wavefront engineering on a photonic chip.”

With traditional interferometers, the signal to noise ratio can be increased, resulting in more meaningful input, by simply cranking up the laser power. But there’s actually a limitation, Cardenas says, because the traditional detectors used with interferometers can handle only so much laser power before becoming saturated, at which point the signal to noise ratio can’t be increased.

Song’s device removes that limitation by reaching the same interferometer signal with less light at the detectors, which leaves room to increase the signal to noise ratio by continuing to add laser power.

Bottom line: “If the same amount of power reaches the detector in Meiting’s weak value device as in a traditional interferometer, Meiting’s device will always have a better signal to noise ratio,” Cardenas says. “This work is really cool, really subtle, with a lot of very nice physics and engineering going on in the background.”

Next steps will include adapting the device for coherent communications and quantum applications using squeezed or entangled photons to enable devices such as quantum gyroscopes.

Other collaborators include Yi Zhang and Juniyali Nauriyal of the Cardenas lab, John Steinmetz of the Department of Physics and Astronomy, and Kevin Lyons of Hoplite AI.

A traffic light for light-on-a-chip

Provided by
University of Rochester