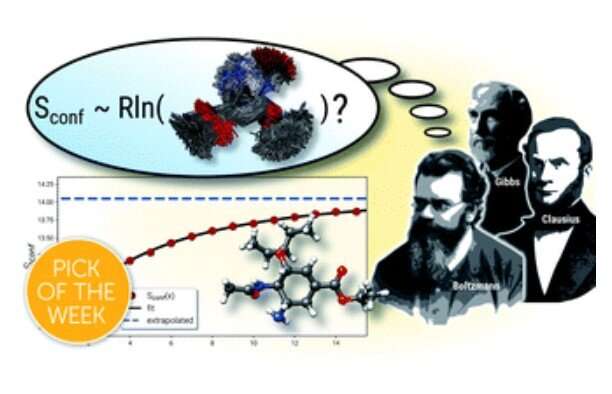 Chemists of the University of Bonn developed a computational tool for the analysis of conformational entropies of flexible molecules. Their method enables the thermodynamic investigation of complicated chemical systems by combination of modern quantum chemical and classical models. In a successful attempt of simplifications, important contributions to the entropy can be calculated with minimal user intervention, even on standard desktop computers. The results are published in the journal Chemical Science and were highlighted as the “Pick of the Week” article.

The term “entropy” was introduced in 1865 by German physicist Rudolf Clausius, who later worked and was rector at the University of Bonn. 2022 will be the 200th anniversary of his birthday and scientific events and celebrations are planned at the University Bonn. Entropy is one of the most fundamental thermodynamic properties of matter and is commonly associated with a state of disorder or uncertainty. Over time the concept has taken hold also in statistical mechanics, as pioneered by famous physicists Josiah Gibbs and Ludwig Boltzmann, and in information theory. Today, entropy is an active area of research across many scientific fields, including computational chemistry.

For molecules the entropy becomes important as part of the temperature dependent description of the internal, so-called free energy, from which many properties such as chemical equilibria or reaction rates are derived. In modern computational chemistry, the entropy of a molecule is obtained from energy levels of atomic vibrations within a molecular structure. Here, due to high computational costs at the quantum chemical level several theoretical simplifications, such as the so-called rigid-rotor harmonic-oscillator approximation, have to be introduced and calculations are mostly conducted only for a single structure. For flexible molecules this leads to the neglect of an important contribution called the conformational entropy, which describes the molecular “disorder” from all thermally accessible conformations. Such flexible cases are common and important for many pharmaceutical drugs.

In a recent attempt to provide accurate themodynamical descriptions of flexible molecules, Prof. Dr. Stefan Grimme and co-workers from the Mulliken Center for Theoretical Chemistry at the University of Bonn developed a new computational tool for the calculation of conformational entropies. While mathematical formulations for calculations of the conformational entropy have been known for quite some time, one main problem is finding and evaluating the huge number of possible structures reaching billions already for medium-sized molecules. Hence, a core component of the newly introduced and freely available software is an efficient algorithm for this task which works with minimal user input, even on standard desktop computers. To achieve the required efficiency, semiemprical quantum chemical methods were applied that are also developed in Grimme’s group, together with standard quantum mechanical calculations. In the article it was shown that the procedure is able to treat even large and extremely flexible systems with unprecedented accuracy for the molecular entropy. It’s the authors hope that the new computational protocol may help to obtain accurate thermodynamic data more routinely and that it will find wide-spread application in computational chemistry.

Stefan Grimme’s research group works on current topics in quantum chemistry with a focus on computational efficiency and large molecules. His co-worker Philipp Pracht is currently finalizing his Ph.D. thesis and is the main author of the program CREST employed for the conformational entropy calculations. This research is published open access in Chemical Science, the Royal Society of Chemistry’s peer-reviewed flagship journal.

HPE wins $2B contract with the NSA