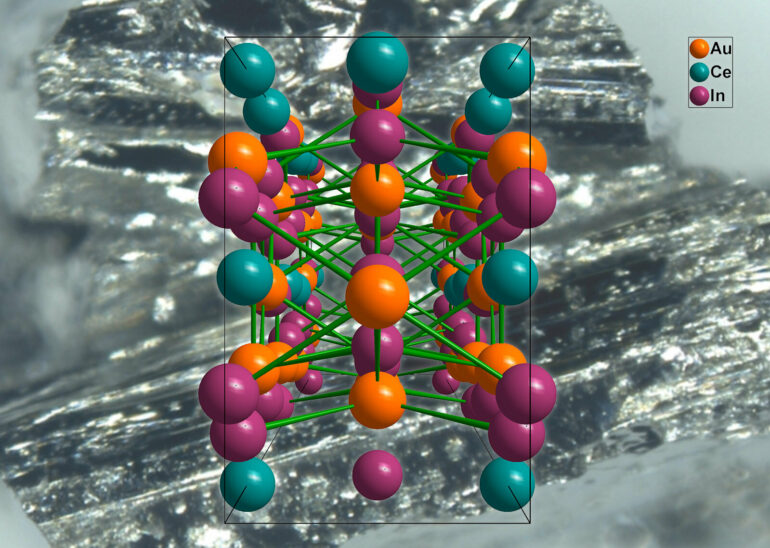 How do you find novel materials with very specific properties—for example, special electronic properties which are needed for quantum computers? This is usually a very complicated task: various compounds are created, in which potentially promising atoms are arranged in certain crystal structures, and then the material is examined, for example in the low-temperature laboratory of TU Wien.

Now, a cooperation between Rice University (Texas), TU Wien and other international research institutions has succeeded in tracking down suitable materials on the computer. New theoretical methods are used to identify particularly promising candidates from the vast number of possible materials. Measurements at TU Wien have shown the materials do indeed have the required properties and the method works. This is an important step forward for research on quantum materials. The results have now been published in the journal Nature Physics.

Rice University in Texas and TU Wien have already worked together very successfully in recent years in the search for novel quantum materials with very special properties: in 2017, the two research groups presented the first so-called “Weyl-Kondo semimetal”—a material that could potentially play an important role in research into quantum computer technologies.

“The electrons in such a material cannot be described individually,” explains Prof. Silke Bühler-Paschen from the Institute of Solid State Physics at TU Wien. “There are very strong interactions between these electrons, they interfere with each other as waves according to the laws of quantum physics, and at the same time they repel each other because of their electrical charge.”

It is precisely this strong interaction that leads to excitations of the electrons, which can only be described using very elaborate mathematical methods. In the materials now being studied, topology also plays an important role—it is a branch of mathematics that deals with geometric properties that are not changed by continuous deformation, such as the number of holes in a doughnut, which remains the same even if the doughnut is slightly squeezed.

In a similar way, electronic states in the material can remain stable even if the material is slightly disturbed. This is precisely why these states are so useful for practical applications such as quantum computers.

Calculating the behavior of all the strongly interacting electrons in the material is impossible—no supercomputer in the world is capable of doing it. But based on previous findings, it has now been possible to develop a design principle that uses simplified model calculations combined with mathematical symmetry considerations and a database of known materials to provide suggestions as to which of these materials might have the theoretically expected topological properties.

“This method provided three such candidates, and we then produced one of these materials and measured it in our laboratory at low temperatures,” says Silke Bühler-Paschen. “And indeed, these first measurements indicate that it is a highly correlated topological semimetal—the first to be predicted on a theoretical basis using a computer.”

An important key to success was to exploit the symmetries of the system in a clever way: “What we postulated was that strongly correlated excitations are still subject to symmetry requirements. Because of that, I can say a lot about the topology of a system without resorting to ab initio calculations that are often required but are particularly challenging for studying strongly correlated materials,” says Qimiao Si of Rice University. “All indications are that we have found a robust way to identify materials that have the features we want.”