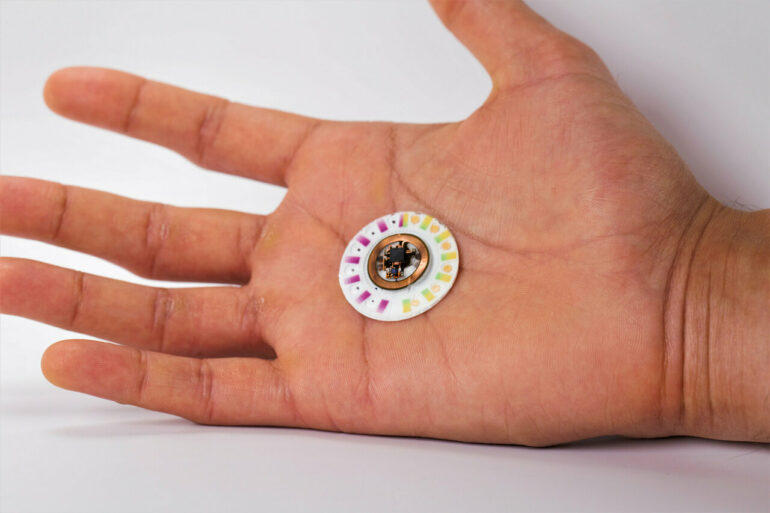 The ability to precisely control the position and movement of miniature devices is being taken into new territory as KAUST scientists develop tinier and simpler devices without a single sensor.

Positioning miniature microelectromechanical devices in industrial or medical applications traditionally relies on a combination of actuators that cause movement and sensors that detect position, explains postdoc Hussein Hussein. “Our novel approach gets rid of sensors,” he says. The prototype devices also use a single actuator rather than the several usually required. Having a single actuator enabled the researchers to reduce the size of their devices and also reduce the complexity of the electronics and power supply.

The devices are fabricated from a wafer of silicon on an insulator, with final dimensions of 2 by 2.5 millimeters width and just 0.4 millimeters thick. The simplicity of the design in being constructed from a single wafer of material is another significant innovation: alternative devices generally require several distinct parts.

Hussein and professor of electrical engineering Hossein Fariborzi developed and tested several versions of their devices and were pleased with the promising results.

They demonstrated that applying a suitable voltage can switch the mobile section through a series of fixed positions a mere 10 micrometers apart. This would carry whatever component was being positioned in a real-world application. A row of serrated catches and grippers on either side of the moving part holds it in stable positions without the need for any sensors. Changing the voltage can return the system to its original configuration.

Hussein and Fariborzi believe that the performance demonstrated by their prototypes could one day be used to precisely control miniature surgical instruments, allowing extremely fine techniques not currently possible. Or it might be used to deliver drugs at very precise locations and times. They hope it might also find applications in many areas of industry where miniaturization and microdevices are taking technology to ever lower scales.

“The devices can be implemented in very narrow spaces without adding the congestion that might be involved using alternative methods,” says Fariborzi. “Because of the simple design and control, we can remove direct electrical connections and enable remote activation and thereby greatly increase the flexibility of this microsystem for use in various applications,” he says.

Hussein says he hopes to be involved in moving the work towards real applications in the future. “The basic design could be easily adjusted to fit any application and put it into practice,” he concludes.

Their work is published in Frontiers in Mechanical Engineering.

In Apps and WebCompaniesGamingSmartphones
on 17 April 202110 min read


Citation:
Ditching sensors for streamlined control of microdevices (2022, May 19)