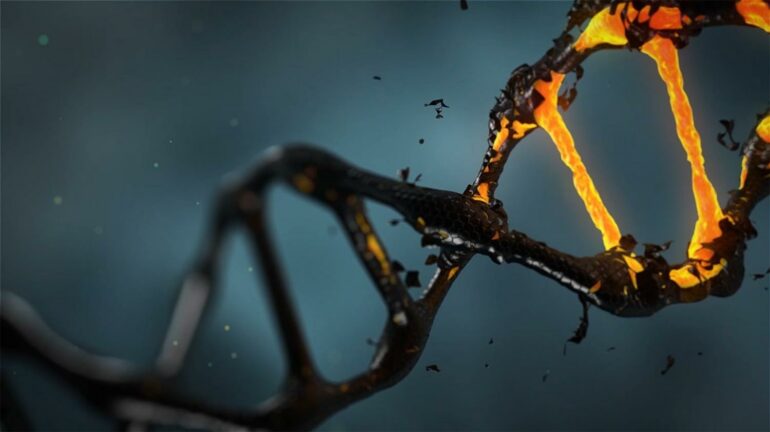 Researchers from the Microbeam Technology and Applications Group at the Institute of Modern Physics (IMP) of the Chinese Academy of Sciences (CAS) have discovered the high turnover and rescue effect of an important scaffold protein in response to heavy charged particle radiation. The results were published in the Biophysical Journal.

DNA damage response and repair play a decisive role in cell proliferation, carcinogenesis and cancer treatment. After DNA is damaged, a large number of DNA damage sensing and repair factors gather to the damage site in a coordinated and orderly manner to repair the damage.

Scaffold proteins play a central role in coordinating the recruitment and dissociation of DNA damage response factors. They perform the function of stabilizing the damaged DNA and its surroundings, and providing binding sites for response factors, thus facilitating a complete repair process. X-ray repair cross-complementary protein 1 (XRCC1) is an important scaffold protein in the base excision repair and single-strand rupture repair pathways.

Using an on-line live-cell imaging system of the High-energy Microbeam Facility at the Heavy Ion Research Facility in Lanzhou (HIRFL), the researchers studied the response of XRCC1 at the localized DNA damage in charged particle irradiated HT1080 cells.

The results demonstrated that the response of XRCC1 is extremely fast at the localized DNA damage of heavy ion hits, and the molecular dynamics behavior of XRCC1 is consistent with the consecutive reaction model.

The researchers then exposed the same cells to fractionated irradiation with a large number of ion hits.

By quantitatively analyzing the recruitment and dissociation rate constants of XRCC1 molecules, they found that fractionated irradiation of the same cells results in accelerated dissociation of XRCC1 at the old damage site, while dissociated XRCC1 is immediately recycled with a higher efficiency.


Citation:
High turnover and rescue effect of scaffold protein in response to heavy-ion radiation (2022, May 20)