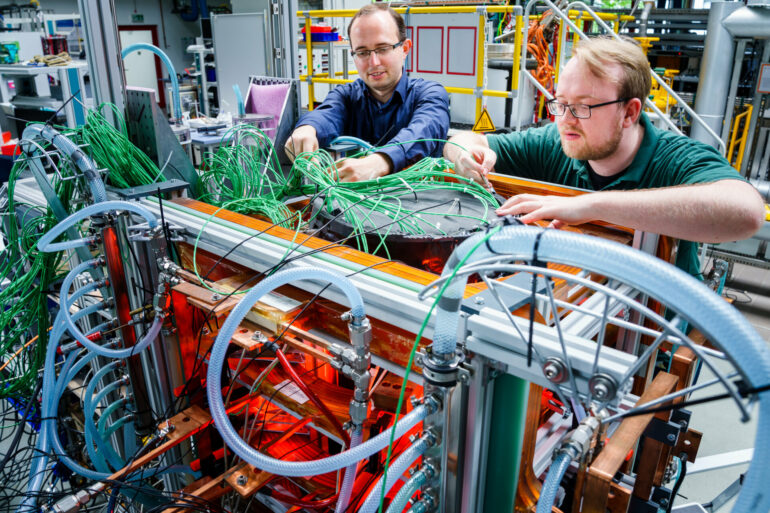 Some metals are in liquid form, the prime example being mercury. But there are also enormous quantities of liquid metal in the Earth’s core, where temperatures are so high that part of the iron is molten and undergoes complex flows. A team at the Helmholtz-Zentrum Dresden-Rossendorf (HZDR) has now simulated a similar process in the laboratory and made a surprising discovery: Under certain circumstances, the flow of liquid metal is far more turbulent than expected—and this has a significant impact on heat transport. The research is published in Physical Review Letters.

Temperatures deep inside the Earth are so high that part of its iron core is liquid. This liquid iron is in constant motion, continuously churning and circulating. It acts like a dynamo, causing our planet’s magnetic field to be generated. One driving force for this complex flow behavior of iron is the Earth’s rotation, another is what is referred to as “convection,” driven by temperature differences: Similar to the way warm air rises above a radiator, where it displaces cooler air, relatively hot iron in the Earth’s core flows to cooler areas, resulting in heat transfer.

As of yet, however, little is known about how these processes take place in detail. To better understand them, experts have to rely on theoretical calculations and computer simulations, as well as experiments that simulate what is happening—at least to some extent—on a laboratory scale.

One such experiment was conducted recently at the HZDR’s Institute of Fluid Dynamics. “We took two cylindrical vessels—a relatively small one about the size of a bucket and the other one shaped like a barrel with a volume of 60 liters,” explained project leader Dr. Tobias Vogt. “We filled these vessels with a metallic alloy of indium, gallium and tin, which is liquid at room temperature.” The experts heated the bottom of the vessels whilst cooling the top, creating a temperature difference of up to 50 degrees Celsius between the higher and lower layers.

This substantial temperature difference caused the liquid metal inside the vessels to churn: Driven by convection, locally warmer flow areas such as columns rose and mixed with the cooler parts—similar to a lava lamp. Since the metal alloy used by the team is opaque, however, they had to resort to a special analytical technique: “It is an ultrasound method used in medicine,” explained Dr. Sven Eckert, Head of Department Magnetohydrodynamics at the HZDR. “We fitted around 20 ultrasonic sensors to the vessels, enabling us to detect how liquid metal flows inside them.”

When analyzing the data, the research group made a surprising discovery. During the experiments, the experts had expected to find the clustering of individual flow areas to form a greater, more extensive structure, known as large-scale circulation. “This is comparable to a thermal wind, which is able to transport heat very effectively between the top and the bottom,” reported Vogt. “We were indeed able to observe this thermal wind in the smaller vessel—but with the larger vessel, the barrel, large temperature differences led to an almost complete breakdown of the wind.” This meant that heat was not transported as effectively as would have been expected. “We believe the cause of this to be the formation of much smaller-scale turbulence rather than a few large swirls, which makes heat transport less effective,” stated Vogt.

These new findings could have implications for what happens in the Earth’s core: “To understand what is happening, experts are attempting to extrapolate the results of laboratory experiments to the scale of the Earth,” explained Sven Eckert. “But we have now shown that heat is transported less effectively under certain conditions than previous experiments had suggested.” This means that predictions for the Earth will likely also produce different values. “However, the real-life processes in the Earth’s core are many times more complex than in our laboratory experiments,” Tobias Vogt added. “For example, the flow of liquid iron is also influenced by the Earth’s magnetic field and rotation—ultimately, we know very little about these flow processes.”

In fact, the new findings could also prove relevant for technology, especially in areas involving liquid metals. For example, liquid metals are used in some types of batteries as well as for future solar power plants, and cool fusion reactors. To be able to take an even closer look at heat transport in liquid metals, the HZDR team are currently working on an advanced analytical technique. “Special induction sensors are expected to record flows in even greater detail than before and produce true 3D images,” remarked Sven Eckert. “Our initial measurements are very promising.”