Lithium-sulfur batteries are one step closer to powering the future 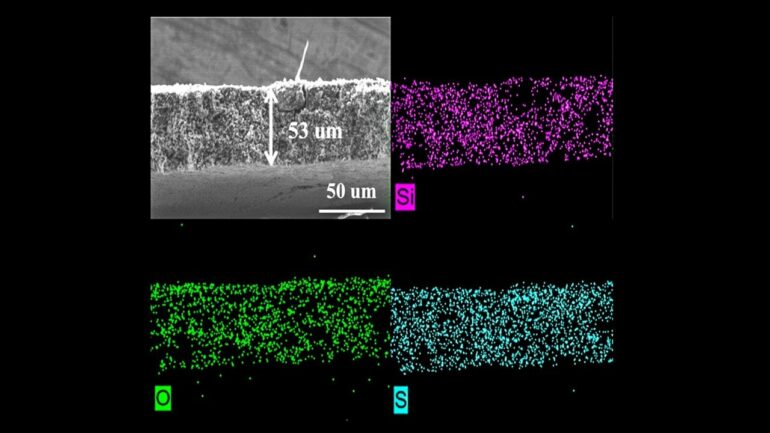 Batteries are everywhere in daily life, from cell phones and smart watches to the increasing number of electric vehicles. Most of these devices use well-known lithium-ion battery technology. And while lithium-ion batteries have come a long way since they were first introduced, they have some familiar drawbacks as well, such as short lifetimes, overheating and supply chain challenges for certain raw materials.

Scientists at the U.S. Department of Energy’s (DOE) Argonne National Laboratory are researching solutions to these issues by testing new materials in battery construction. One such material is sulfur. Sulfur is extremely abundant and cost effective and can hold more energy than traditional ion-based batteries.

In a new study, researchers advanced sulfur-based battery research by creating a layer within the battery that adds energy storage capacity while nearly eliminating a traditional problem with sulfur batteries that caused corrosion.

A promising battery design pairs a sulfur-containing positive electrode (cathode) with a lithium metal negative electrode (anode). In between those components is the electrolyte, or the substance that allows ions to pass between the two ends of the battery.

Early lithium-sulfur (Li-S) batteries did not perform well because sulfur species (polysulfides) dissolved into the electrolyte, causing its corrosion. This polysulfide shuttling effect negatively impacts battery life and lowers the number of times the battery can be recharged.

To prevent this polysulfide shuttling, previous researchers tried placing a redox-inactive interlayer between the cathode and anode. The term “redox-inactive” means the material does not undergo reactions like those in an electrode. But this protective interlayer is heavy and dense, reducing energy storage capacity per unit weight for the battery. It also does not adequately reduce shuttling. This has proved a major barrier to the commercialization of Li-S batteries.

To address this, researchers developed and tested a porous sulfur-containing interlayer. Tests in the laboratory showed initial capacity about three times higher in Li-S cells with this active, as opposed to inactive, interlayer. More impressively, the cells with the active interlayer maintained high capacity over 700 charge-discharge cycles.

“Previous experiments with cells having the redox-inactive layer only suppressed the shuttling, but in doing so, they sacrificed the energy for a given cell weight because the layer added extra weight,” said Guiliang Xu, an Argonne chemist and co-author of the paper. “By contrast, our redox-active layer adds to energy storage capacity and suppresses the shuttle effect.”

To further study the redox-active layer, the team conducted experiments at the 17-BM beamline of Argonne’s Advanced Photon Source (APS), a DOE Office of Science user facility. The data gathered from exposing cells with this layer to X-ray beams allowed the team to ascertain the interlayer’s benefits.

The data confirmed that a redox-active interlayer can reduce shuttling, reduce detrimental reactions within the battery and increase the battery’s capacity to hold more charge and last for more cycles. “These results demonstrate that a redox-active interlayer could have a huge impact on Li-S battery development,” said Wenqian Xu, a beamline scientist at APS. “We’re one step closer to seeing this technology in our everyday lives.”

Going forward, the team wants to evaluate the growth potential of the redox-active interlayer technology. “We want to try to make it much thinner, much lighter,” Guiliang Xu said.

A paper based on the research appeared in the Aug. 8 issue of Nature Communications. Khalil Amine, Tianyi Li, Xiang Liu, Guiliang Xu, Wenqian Xu, Chen Zhao and Xiao-Bing Zuo contributed to the paper.


Citation:
Lithium-sulfur batteries are one step closer to powering the future (2023, January 6)