Marine plankton tell the long story of ocean health, and maybe human too 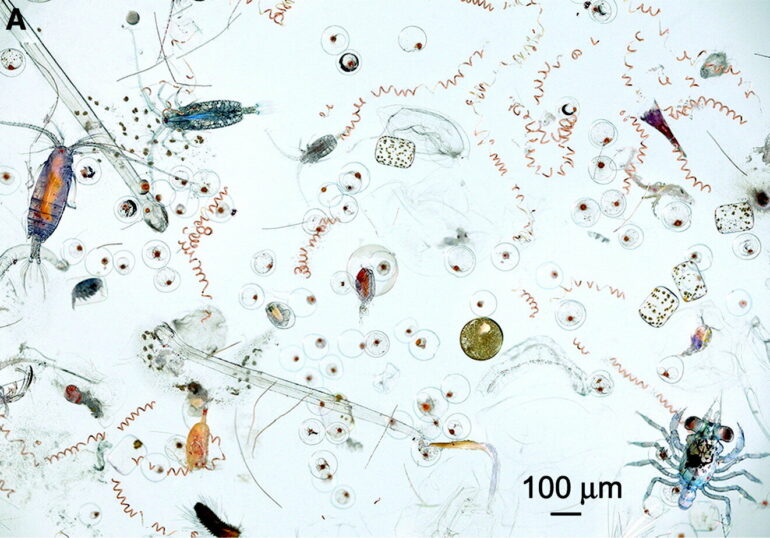 Using samples from an almost century-old, ongoing survey of marine plankton, researchers at University of California San Diego School of Medicine suggest that rising levels of manmade chemicals found in parts of the world’s oceans might be used to monitor the impact of human activity on ecosystem health, and may one day be used to study the connections between ocean pollution and land-based rates of childhood and adult chronic illnesses.

The findings are published in the January 6, 2023, issue of the journal Science of the Total Environment.

“This was a pilot study to test the feasibility of using archived samples of plankton from the Continuous Plankton Recorder (CPR) Survey to reconstruct historical trends in marine pollution over space and time,” said senior author Robert K. Naviaux, MD, Ph.D., professor in the Department of Medicine, Pediatrics and Pathology at UC San Diego School of Medicine. “We were motivated to explore these new methods by the alarming increase in childhood and adult chronic disease that has occurred around the world since the 1980s.

“Recent studies have underscored the tight linkage between ocean pollution and human health. In this study, we asked the question: Do changes in the plankton exposome (the measure of all exposures in a lifetime) correlate with ecosystem and fisheries health?

“We also wanted to lay the groundwork for asking a second question: Can manmade chemicals in plankton be used as a barometer to measure changes in the global chemosphere that might contribute to childhood and adult illness? Stated another way, we wanted to test the hypothesis that the rapid turnover and sensitivity to contamination of plankton might make them a marine version of the canary in the coal mine.”

Based in the United Kingdom, the CPR Survey is the longest running, most geographically extensive marine ecology survey in the world. Since 1931, almost 300 ships have traveled more than 7.2 million miles towing sampling devices that capture plankton and environmental measurements in all of the world’s oceans, the Mediterranean, Baltic and North seas and in freshwater lakes.

The effort, along with complementary programs elsewhere, is intended to document and monitor the general health of oceans, based upon the well-being of marine plankton—a diverse collection of usually tiny organisms that provide sustenance for many other aquatic creatures, from mollusks to fish to whales.

“Marine plankton exist in all ocean ecosystems,” said study co-author Sonia Batten, Ph.D., former coordinator of the Pacific CPR and currently executive secretary of the North Pacific Marine Science Organization. “They create complex communities that form the base of the food web, and they play essential roles in maintaining the health and balance of the oceans. Plankton are generally short-lived and very sensitive to environmental changes.”

Naviaux, co-corresponding author Kefeng Li, Ph.D., a project scientist in Naviaux’s lab, and colleagues evaluated plankton specimens taken from three different locations in the North Pacific at different times between 2002 and 2020, then used a variety of technologies to assess their exposure to different manmade chemicals, including pharmaceuticals; persistent organic pollutants (POPs) such as industrial chemicals; pesticide; phthalates and plasticizers (chemicals derived from plastics); and personal care products.

Many of these pollutants have decreased in amount over the past two decades, the researchers said, but not universally, and often in complex ways. For example, analyses suggest levels of legacy POPs and the common antibiotic amoxicillin have broadly declined in the North Pacific Ocean over the past 20 years, perhaps in part from increased federal regulation and a decrease in overall antibiotic use in the United States and Canada, but the findings are confounded by coinciding increases in use in Russia and China.

The most polluted samples were taken from nearshore areas closest to human activity and subject to phenomena like terrestrial runoff and aquaculture. In these places, there were higher levels and greater numbers of different chemicals found in plankton taxa living in those nearshore environments.

The authors said their pilot project points the way toward follow-up research designed to examine correlations between the plankton exposome, predator-prey relationships and impacted fisheries.

“Follow-up studies by epidemiologists and marine ecologists are needed to test if and how the plankton exposome correlates with important medical trends in nearby human populations like infant mortality, autism, asthma, diabetes, and dementia,” Naviaux said.

Naviaux noted the findings present new clues to explaining the nature of many chronic diseases in which phases of the cell danger response (CDR) persist, leading to chronic symptoms.

For more than a decade, Naviaux and colleagues have posited that accumulating data suggests numerous diseases and chronic illnesses, from neurodevelopmental disorders like autism spectrum disorder and neurodegenerative disorders like ALS to cancer and major depression are at least partly the consequence of metabolic dysfunction that results in incomplete healing, characterized as CDR.

Naviaux has published extensively on the topic, including how CDR can be affected by environmental factors that result in metabolic dysfunction and chronic disease.

“The purpose of CDR is to help protect the cell and jump-start the healing process after injury, by causing the cell to harden its membranes, decrease and change its interaction with neighbors, and redirect energy and resources for defense until the danger has passed,” said Naviaux.

“But sometimes the CDR gets stuck. This prevents completion of the natural healing cycle, altering the way the cell responds to the world. When this happens, cells behave as if they are still injured or in imminent danger, even though the original cause of the injury or threat has passed. We have learned that many kinds of environmental chemicals, trauma, infection, or other kinds of stress can delay or block the completion of the healing cycle. When this happens, it leads to the symptoms of chronic disease.”

“The CDR is a whole-body process that begins with mitochondria and the cell. Mitochondria are organelles in the cell that act as bio-sentinels that are constantly monitoring the chemistry of the cell and its surroundings. Mitochondria regulate metabolic activity needed for energy and movement, innate immunity, for regulating the health of the microbiome, and for making the building blocks needed for tissue repair after injury.”

In the marine plankton study, Naviaux and co-authors found that perfluoroalkyl substances (chemicals commonly used to enhance water-resistance in various everyday products, from packaging to clothing to cookware) were prominent in the plankton exposome.

Such substances are known to inhibit some mitochondrial proteins, including an important enzyme used to regulate cortisol metabolism and organisms’ responses to stress. Other chemicals found included phthalates from plastics and personal care products, such as lotions and shampoos. Phthalates are endocrine-disrupting chemicals that have been increasing in the plankton exposome for more than 20 years, and have both direct and indirect effects on mitochondria.

“Plankton are responding to the chemicals in their exposome, in part by changes in their own mitochondria that change their biology,” said Naviaux, “and so too, I would argue, are humans. It is my hope that the use of our methods by research groups around the world will reinforce the connection between ecosystem health and human health, and provide new tools to monitor how the human chemical footprint has changed over the past century.

“If the linkages are found to be close enough, plankton exposomics from observatory sites around the world might be used in the future to track and curb pollution that leads to human disease.”