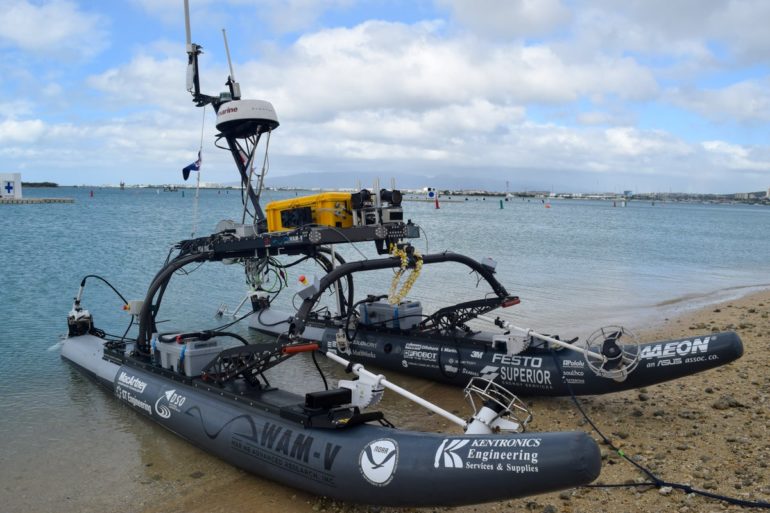 As it was in the age of sail, so it is today: whoever controls the seas wields tremendous global power. But maritime strength may increasingly be measured not in manned warships and aircraft carriers but in fleets of autonomous seagoing robots.

To that end, it’s only fitting that the Naval Postgraduate School and the Office of Naval Research are joining forces again with Open Robotics, which oversees the open-source Robotic Operating System and the Gazebo robotics simulator, as well as Robonation, a STEM organization, to organize a simulated maritime competition in 2022.

The main goal of the Virtual RobotX (VRX) competition is to provide a simulation framework to support maritime autonomy development, according to the organizers. It’s worth keeping an eye on this competition as it quite literally is helping create the future of maritime warfare as well as probable commercial applications for robots on the water.

The VRX Competition 2022 includes a few tracks, including developing fundamental capabilities in localization, navigation, and perception as a foundation for higher-level autonomy. Teams will then be asked to put those foundational capabilities into multi-step autonomous operation via a number simulated challenges, including performing a dock and deliver task, scanning a code on a buoy, avoiding wildlife, and navigating through obstacles toward a sonic beacon.

The use of Gazebo, an open-source robotics simulator that’s become an important tool in the industry, is a nice nod to the increasingly open source nature of robotics development. By utilizing simulators and open source code, the competition will be drastically more accessible to participants. Growing companies like Clearpath Robotics and Fetch have used the open-source Robot Operating System (ROS) to create commercialized robots, demonstrating the importance of the open source ecosystem to substantive robotics development. The simulated environment is also critical in testing a variety of real world scenarios, including maintaining position and heading in the presence of environmental forces like wind and waves.

VRX registration opens this month, and competition will take place in early 2022. RobotX hosts both virtual and non-virtual automation challenges with a focus on seagoing robots.