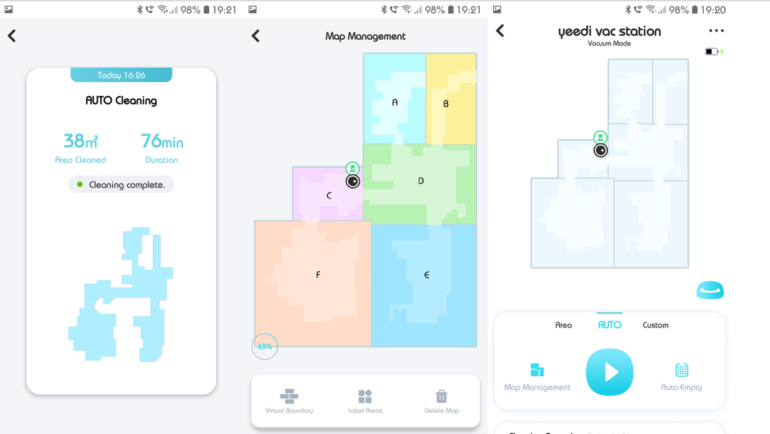 I have mixed feelings about Yeedi robot vacuums. I was so disappointed with the Yeedi 650 — that would not connect to its app and would not work without it — that I did not even review it for ZDNet.

I was more impressed with the Yeedi K700 — but that vacuum did not have an app, or a scheduling feature on its remote control. The K700 was a manual push-and-go vacuum, perfect for the technophobe.

Based on my limited experience of the brand, I had low expectations about the Yeedi Vac Station — but I have been blown away by the performance and power of this model.

The robot vacuum itself is streamlined without the LiDAR bump that is standard on many of the vacuums I have tried. There is a camera that uses 3D visual SLAM mapping to assess the room and map what has been cleaned.

Under the lift-up lid, there is a dust bin, as well as a place to store the roller brush cleaning tool — this often goes missing from other robots. The Yeedi has one side brush, a roller brush, and an on-board water tank which feeds water to the mopping cloth.

Inside the box there is the robot, base plate, auto-empty station, and ramp for the robot to climb up to its dock to empty its bin and recharge.

There is a mopping cloth and a spare dust bag for the auto-empty station. The instruction manual for the Yeedi I received was in Russian and, unfortunately, at the moment there is no downloadable owners manual on the Yeedi website.

You need to fit the base plate and ramp to the auto-empty station using the screwdriver and screws provided in the box. Then you can switch on the robot using the red switch under the lid and set the robot vacuum to fully charge, which takes about six hours from empty.

The auto-empty station looked really familiar to me. When I checked through previous product images I received, I realized that, although the Yeedi Vac Station I have is a different color, it is exactly the same auto-empty station model as is fitted to the Ecovacs Ozmo T8 that I reviewed in September 2020.

Yeedi has obviously done a lot of work to its app since my experience with the 650. The Yeedi Vac Station easily connected to my 2.4GHz Wi-Fi and the app. The app has settings that allow you to check the condition of your accessories (such as the side brush, main brush, and HEPA filter), set a cleaning schedule, or enable continuous cleaning.

If you have a large area and the battery gets too low — which takes about three hours of sweeping — the robot vacuum will go to its dock to recharge. Once topped up, the robot vacuum will return to the same area to finish its sweeping. In the app you can set a “do not disturb” timeframe where the robot will not initialize, and also turn on “auto-boost” for when the robot detects carpet.

You can configure the robot to use its auto-empty station, or leave this function off if you prefer to empty the on-board dustbin yourself, or if you have run out of cleaning bags. There is also a setting to choose the strength of the vacuum’s suction power, up to a maximum of 3000Pa.

The mopping feature is adequate. It works well for daily cleaning of daily marks from hard floors — but it does not work with heavily soiled floors. Mopping stations on most robot vacuums essentially wipe over the floors with a wet cloth and nothing more, so do not expect much performance if your hard floors regularly get grimy.

One of the most impressive features of the Yeedi Vac Station, however, is its ability to go almost anywhere. I have reviewed 39 vacuums for ZDNet since June 2018, and most of them cannot cross one particular threshold into one of the rooms at my home.

What is a neural network? A computer scientist explains

In AICompaniesGamingRoboticsSmartphones
on 11 December 20203 min read

Some can get into the room, but none can get back out, as the threshold for the room is a couple of millimeters higher than thresholds through the rest of the house.

The Yeedi robot vacuum crosses in and out of the room seamlessly — so seamlessly that I had to check the app map to make sure it has actually been into the room, instead of backing away and going somewhere else.

The app mapping for the Yeedi Vac Station is not good. Other manufacturers such as Ecovacs and Roborock have superb app maps. Yeedi does not. Its maps are primitive, and it is a challenge to figure out from the map which room has been cleaned.

However, the app did record that the robot went into different rooms for zone cleaning — even though the path taken in each room, as shown on the map above, revealed that about 20% of each room was not actually swept. Using the mapping of recognized zones, you can set a schedule for some zones to be cleaned more often than other, lesser-used zones.

If you need a robot that will cross your higher thresholds in your home or office, then the Yeedi Vac Station is the robot vacuum for you.