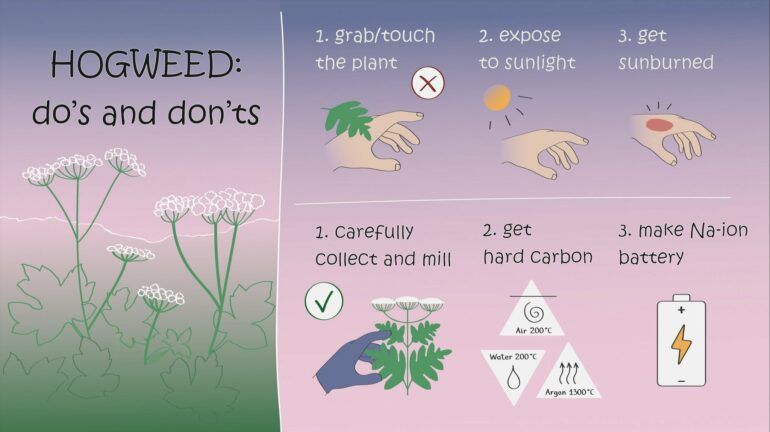 Researchers from MSU and Skoltech have transmuted a pesky poisonous weed into high-grade anode material for sodium-ion batteries. These are an emerging cheaper alternative to lithium-ion batteries for uses where compact size is not crucial, such as on solar and wind farms. The study was published in Batteries.

“We thought, wouldn’t it be fun to take something as nasty and objectionable as hogweed and make something useful out of it,” study co-author Zoya Bobyleva of Lomonosov Moscow State University commented. “The thing about hard carbon materials, used in sodium-ion battery anodes, is you can make them from biomass of virtually any origin. No one has considered hogweed before. But it turned out pretty well.”

Sosnowsky’s hogweed is an invasive plant that causes severe skin burns. Originally imported to central Russia from Caucasus as an experimental forage crop, it quickly got out of control and, according to forecasts by Skoltech researchers, is threatening to spread over the entire European part of the country by the mid-21st century.

Sodium-ion batteries are an alternative technology for power storage that avoids using lithium, which is largely concentrated in a select few countries, is becoming increasingly expensive, and is not environmentally friendly in production. If a battery uses sodium ions instead of lithium ions, however, completely different materials have to be used in the cathode and anode. Not long ago, Skoltech researchers proposed a cathode material with outstanding properties. This time, another research group based at the Institute and MSU, came up with a high-quality anode material derived from a fairly unlikely source.

“As of today, hard carbon offers the best combination of properties for a sodium-ion battery anode. It’s an amorphous form of carbon that does not transform into graphite even when exposed to very high temperatures. Unlike graphite, its structure can accommodate sodium ions and release them over many cycles, which is crucial for battery operation, and it does not significantly expand in size upon charge-up. It is also cheap, reasonably easy to synthesize and dispose of, and does not create significant fire hazards. The two key figures of merit here are Coulombic efficiency and energy storage capacity,” the study’s principal investigator, Professor Evgeny Antipov of Skoltech and MSU, said.

The hard carbon produced by the MSU-Skoltech team exhibited a Coulombic efficiency of 87%, which is on par with the best reported results for hard carbons synthesized from other raw materials. That characteristic reflects how well a material stores energy without wasting it on unwanted irreversible secondary processes that actually harm the battery. As for the energy storage capacity, at about 260 mAh/g, the material falls short of the best results reported elsewhere—around 300 mAh/g—but is still reasonably good.

“In fact, we considered both winter hogweed, which is safe for harvesting, and the nasty summer hogweed in full bloom. Hate to tell you, but the specimens gathered in the summer proved better in terms of the Coulombic efficiency of the end product, which is the characteristic we emphasized in this study, because it tends to be the weak spot of hard carbon anodes. As for the energy storage capacity, there are ways we can probably improve it later on,” Bobyleva added.

The team tested three popular approaches to hard carbon synthesis. First, there’s direct carbonization: heating the biomass to 1,300 degrees Celsius in an atmosphere without oxygen. Alternatively, you can treat the biomass with an acid to remove metallic and other impurities prior to carbonization. This approach resulted in a significantly higher Coulombic efficiency. Or you can boil the hogweed biomass in water in a closed reactor—this produces very small carbon-containing spheres. While all three approaches led to comparable energy storage capacity, heat treatment with prior impurity removal resulted in the best Coulombic efficiency.

“The demand for rechargeable accumulators will continue to grow. And when it comes to stationary batteries deployed at industrial facilities and in the production of renewable energy to even out fluctuations in available sunlight or wind power, the sodium-ion technology appears very promising. These batteries will be much cheaper, and while they might be heavier and bulkier, it won’t be much of a problem for the relevant applications,” study co-author Professor Artem Abakumov said; he heads the Center for Energy Science and Technology at Skoltech.

In Apps and WebCompaniesSmartphones
on 26 January 20211 min read