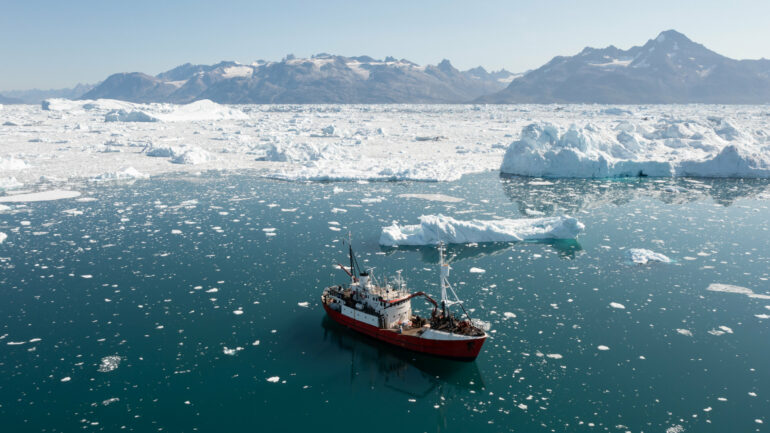 While previous studies have shown that rising air and ocean temperatures both cause the Greenland ice sheet to melt, the new study reveals how one intensifies the effects of the other.

Experts liken the effect to how ice cubes melt more quickly if they are in a drink that is being stirred—the combination of warmer liquid and movement accelerates their demise.

In Greenland, amplification occurs when warm air temperatures melt the surface of the ice sheet, generating meltwater. Meltwater flowing into the ocean creates turbulence that results in more heat melting the edges of the ice sheet submerged in the ocean—so-called submarine melting.

Researchers from the Universities of Edinburgh and California San Diego have evaluated submarine melting of the Greenland ice sheet—which covers more than 650,000 square miles—over a 40-year period from 1979 to 2018.

To determine the impact of both warming air and seas on ice sheet loss they used observational data and computer modeling to analyze the effect each had on submarine melting.

The team found that air temperature has had almost as much impact as ocean temperature on submarine melting, with some regional variations.

For example, ocean temperature is the main factor that controls submarine melting in south and central-west Greenland, while atmospheric warming is equally damaging in the island’s northwest.

The findings suggest that if the atmosphere had not warmed since 1979, the retreat of Greenland’s glaciers, driven by submarine melting, could have been reduced by a half in the northwest region, and by a third across Greenland as a whole.

The study was published in the journal Nature Geoscience.

Dr. Donald Slater, of the University of Edinburgh’s School of GeoSciences, who led the study, says that “the effect we investigated is a bit like ice cubes melting in a drink—ice cubes will obviously melt faster in a warm drink than in a cold drink, hence the edges of the Greenland ice sheet melt faster if the ocean is warmer. But ice cubes in a drink will also melt faster if you stir the drink, and rising air temperatures in Greenland effectively result in a stirring of the ocean close to the ice sheet, causing faster melting of the ice sheet by the ocean.”

“This unfortunately adds to the overwhelming body of evidence showing the sensitivity of the Greenland ice sheet to climate change, hence the need for urgent action to reduce greenhouse gas emissions.”