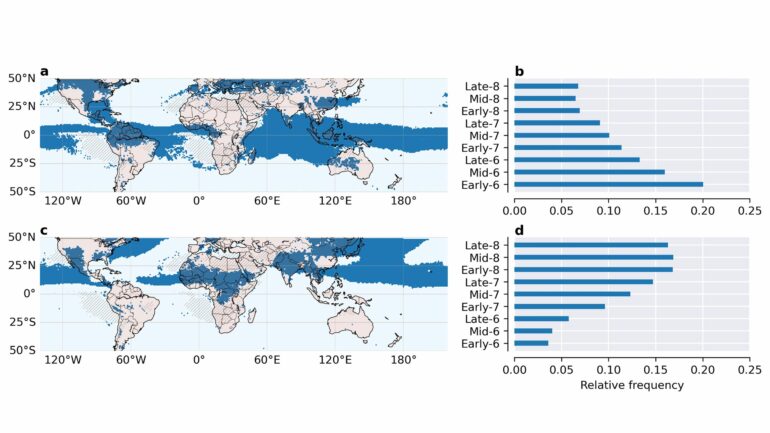 Precipitation extremes are very likely to become more frequent in most locations, according to the Sixth Assessment Report of the Intergovernmental Panel on Climate Change released in February 2022. Thus, exploring extreme rainfall patterns—occurrences of natural hazards like floods or landslides—on a global scale is elevated to an issue of great societal importance.

In Chaos, researchers in Germany propose using a complex-network-based clustering workflow to search for synchronized structures of extreme rainfall events within the context of atmospheric chaos.

By doing this, they were able to reconstruct a functional climate network to encode the underlying interaction of the climate system. Clusters on the network revealed regions of similar climatological behaviors.

For example, monsoons describe atmospheric circulation seasonal changes, and while they are distributed on different continents, their occurrences are usually accompanied by precipitation extremes.

“Although global-scale atmospheric circulation within the tropics and subtropics forms connections between different monsoons, they are essentially driven, synchronized, and coordinated by the annual cycle of solar radiation,” said Zhen Su at Potsdam Institute for Climate Impact Research and Humboldt Universität zu Berlin. “Synchronization can also occur between extreme rainfalls, even when they are not occurring within monsoon regions.”

This means extreme rainfalls within different locations are not independent of each other but have a certain degree of similarity.

“In this regard, it still remains unclear what the global-scale synchronization pattern of extreme rainfall will look like, for example, during the summer season of the Northern Hemisphere,” Su said. “We aim to find the answer from observational precipitation data.”

The global synchronization of extreme rainfall has two main distributions with independent temporal and spatial characteristics. “One occurs mainly from early June to mid-July,” said Su. “The other happens primarily from mid-July to late August.”

“The synchronization structure of extreme rainfall tells us how the climate system is interconnected on a global scale,” said Su. “It also provides insights for improving corresponding interaction processes in general circulation models, which are mostly used for estimating the state of our future climate.”

More information:
The climatic interdependence of extreme-rainfall events around the globe, Chaos An Interdisciplinary Journal of Nonlinear Science (2022). aip.scitation.org/doi/10.1063/5.0077106


Provided by
American Institute of Physics