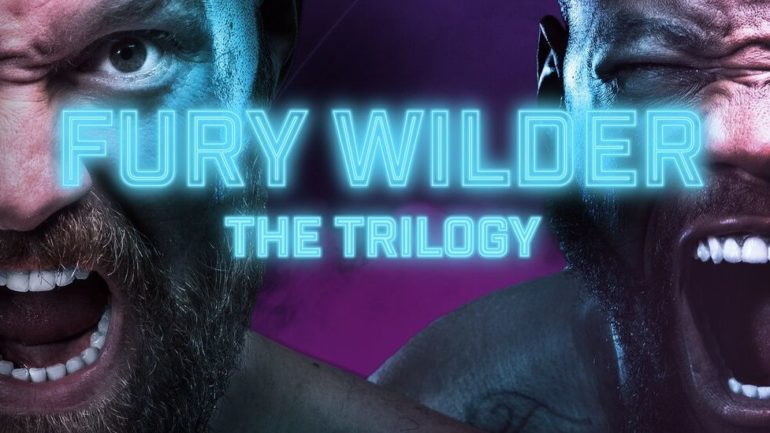 It’s been a long time coming, but the concluding part of the epic Tyson Fury vs Deontay Wilder trilogy comes to its climax today. It’s all set to take place in Las Vegas this weekend and we have all the details you need on watching a Fury vs Wilder 3 live stream – including fight times, when to tune in if you’re in the UK, confirmed undercard and which lucky countries get the benefit of a FREE Fury vs Wilder live stream.

Fury toyed with his opponent in their second meeting back in February 2020, two knockdowns either side of a couple of undignified stumbles proving enough for the American’s corner to throw in the towel. The fight was stopped in Round 7 with Wilder bleeding from the mouth and ear.

But it was his ego that took the biggest hit, Wilder doing himself no favors in the aftermath of the fight by resorting to a series of increasingly far-fetched excuses.

Wilder has had to bide his time patiently for a shot at redemption, after his British foe tested positive for Covid-19 before the slated July rematch. But the waiting is now very nearly over and you’ll be able to watch a Fury vs Wilder 3 live stream very soon.

Can’t wait? Read on for the information you require on the massive rematch. We’ll tell you which countries able to watch Fury vs Wilder free, when you should be setting your alarm for and which other fights you’ll get to enjoy before the big main event.

When is Fury vs Wilder 3: time in UK and abroad

The main undercard will kick off at 4pm PT / 8pm ET in the US and midnight BST in the UK.

The main event time will depend on how quickly the rest of the card plays out, but last time these guys fought the ring walks started at around 9pm PT / midnight ET and 5am BST.

Will there be a free Fury vs Wilder live stream?

For such a big ticket boxing event, it won’t surprise you to know that most countries have only -pay-to-watch options for Fury vs Wilder III – see below for more details.

Amazingly however, lucky boxing fans in Turkey were able to watch last February’s match for free courtesy of DMAX. And we’ve scoured TV listings around the world and have found that Azteca 7 in Mexico, REN-TV in Russia, and PPTV in Thailand will also have free-to-air coverage in those regions.

Outside that, the official broadcaster in Austria, Germany and Switzerland is sports streaming specialist DAZN. The great thing for fight fans in those countries is that there’s a free DAZN trial if you haven’t used the service below.

Below, we’ve rounded up ways to watch Fury vs Wilder 3 in various countries around the world. But if you’re abroad and discover that your usual coverage is geo-blocked, then the only alternative that we know is to use a VPN to dial in to a country that does is showing the fight.

Use a VPN to live stream Fury vs Wilder 3 anywhere

How to watch Fury vs Wilder 3: PPV price and live stream in the US

Fury vs Wilder 3 is a pay-per-view event in the US, which is being jointly promoted by Fox Sports and ESPN Plus.

It’s an expensive fight for sure though, with the Fury vs Wilder 3 price set at $79.99 – way more than anywhere else in the world. And that fee applies whether or not you’re an existing Fox Sports or ESPN subscriber.

If you do cough up the dough, you’ll be able to live stream the fight on the Fox Sports or ESPN Plus app.

The PPV coverage begins at 9pm ET / 6pm PT, with the Gypsy King and the Bronze Bomber expected to make their ring walks at around 10pm ET / 7pm PT.

Fury vs Wilder 3 live stream: how to watch the fight in the UK

BT Sport is the place to watch Fury vs Wilder 3 in the UK, but as it’s a PPV event you’ll need to purchase it from the BT Sport Box Office, where it costs £24.95.

You’ll have to prepare for a late one though, because coverage of the event starts at 12am BST on Saturday night/Sunday morning, with Tyson Fury and Deontay Wilder expected to make their ring walks no earlier than 4am.

As well as via BT TV, Sky or Virgin, you can watch the event online, on the BT Sport Box Office app on iOS and Android, or via Chromecast and Airplay.

If you’re outside the UK and want to tune in, it’s simple to do with a handy tool – simply grab a VPN and follow the instructions above to live stream the action.

While Fury vs Wilder is PPV or bust in most countries, that’s not the case in some major European nations where DAZN holds the fight rights.

So if you’re a boxing fan in any of Austria, Germany or Switzerland, then get yourself over to the DAZN website.

Even better news…you can actually watch absolutely FREE in those countries thanks to a 30-day free trial, that you can take advantage of if you’ve never had a subscription before.

How to watch Fury vs Wilder 3: live stream in Australia

It’s PPV or bust in Australia too, with Fox’s Kayo streaming service and Main Event showing Fury vs Wilder 3 Down Under.

Twitter users can now remove followers without them knowing

In Apps and WebComputer science
on 11 October 20211 min read

The fight is priced at $59.95, and Fury and Wilder are expected to make their ring walks at around 2-4pm AEDT on Sunday afternoon – a positively sociable hour compared to other parts of the world- with coverage beginning at 12pm.

As a streaming service, Kayo Sports has made a real name for itself as the flexible, reasonably priced alternative to pricier packages. Sign up for the Fury vs Wilder fight and you’ll be able to watch across a range of devices, including your desktop web browser, iPhone, Android, Android TV, Apple TV, Chromecast, PS4 & 5, and selected Smart TVs.

Not in Australia right now? Use a VPN if you’re away from home, in order to tap into your domestic coverage.

Boxing fans based in New Zealand can watch Fury vs Wilder 3 over on Sky Arena.

As is the case elsewhere, it’s a PPV affair, costing $39.95. Coverage begins at 2pm NZDT, ahead of the ring walks at around 3pm.

Anyone in New Zealand from abroad or vice-versa can use the VPN route outlined above to access their preferred coverage just like they would at home.

Despite an enormous amount of weight gain and just two preparatory fights, Tyson Fury fought then-WBC heavyweight champion Deontay Wilder for the first time in December 2018, being knocked down twice but otherwise looking the superior boxer.

The fight was, controversially, scored as a draw, but Fury dominated the rematch in February 2020, Wilder’s corner throwing in the towel in Round 7 after their man had twice been knocked to the canvas.

The 6ft 7in Wilder later claimed that his 40lb ring-walk costume tired him out, that his water may have been spiked, and that Fury scratched his ears with something concealed within his glove.

Who is Tyson Fury?

Tyson “The Gypsy King” Fury is the undefeated WBC and The Ring heavyweight champion, and widely considered the lineal unified champion of the world.

The 32-year-old, who stands at a towering 6ft 9in, is one of the best pound-for-pound boxers in the world, and the only boxer to beat two champions with at least 10 successful title defences behind them.

He took the WBA, WBO IBO, IBF and The Ring titles off Wladimir Klitschko in 2015, but was forced to relinquish them due to a combination of factors, including contractual conflicts, doping violations and mental health issues.

Who is Deontay Wilder?

Deontay “The Bronze Bomber” Wilder is the former WBC heavyweight champion of the world, and is considered the most powerful puncher in the sport.

An astonishing 41 of the 35-year-old’s 42 career victories have come by way of knockout, though his most famous knockdown punch was defied by Fury, who rose from the canvas in the final round of their first fight, having looked out for the count.

The man from Alabama was undefeated before Fury beat him in their rematch last year.