Turning an analysis of Asimov’s Foundation into art 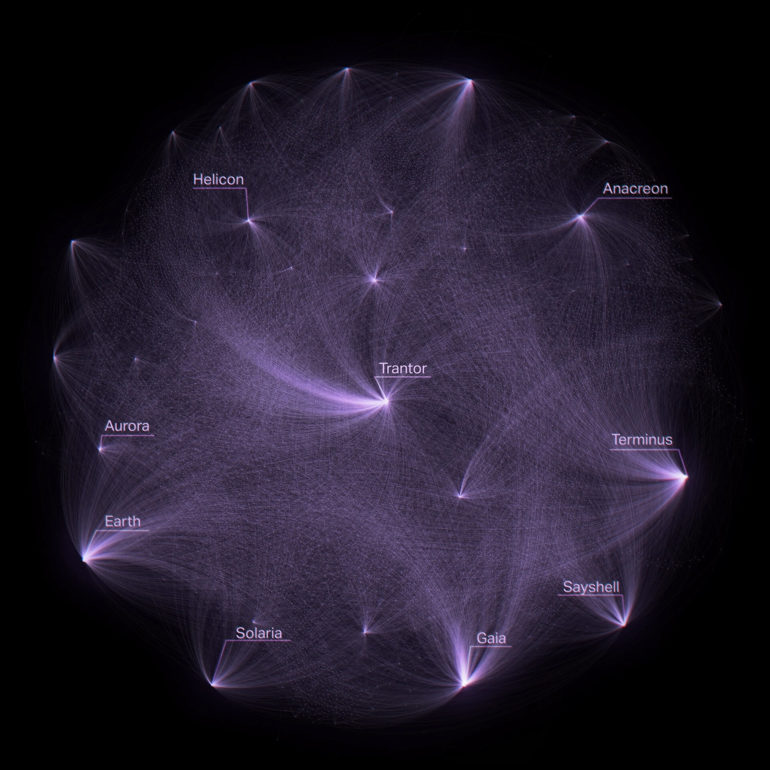 In recent years, numerous computer scientists and artists worldwide have worked on projects that merge digital art and computer science. For instance, some introduced computational models that can create original artworks, while others used data analysis tools to examine literary works or paintings.

Milan Janosov Ph.D., chief data scientist at Datapolis and research affiliate at the Central European University, and Flora Borsi, distinguished digital artist, have recently carried out a study that merges data science and digital art in an innovative and intriguing way. Their paper, pre-published on arXiv, was aimed at analyzing Isaac Asimov’s science fiction book series “Foundation,” while simultaneously producing a unique digital artwork based on this analysis.

“Our paper is an original research project, while we also relied on results and methods presented in previous studies,” Milán Janosov, one of the researchers who carried out the study, told TechXplore. “This is a completely new project. In the past, I had a few other projects also rooted in popular culture, but their objectives were quite different. Its main objective was twofold: on the one hand, to understand the main patterns in Isaac Asimov’s “Foundation” series, and on the other hand, to portray these patterns as a digital piece of (data) art.”

Janosov’s co-author, Borsi, is a Hungarian fine art photographer known for her use of photo manipulation methods to create surreal and creative images. Her work was presented at exhibitions in renowned galleries across Europe and the US, including the Louvre in Paris and Saatchi Gallery in London.

Janosov focused on the data science aspect of the project—the analysis of Asimov’s “Foundation” series, while Borsi worked on translating the results of this analysis into a digital artwork. The final artwork can be viewed both on Instagram and on the NFT platform Foundation.

Initially, Janosov and Borsi examined Asimov’s career history to better understand how important and relevant the “Foundation” book series was throughout his career. Remarkably, they found that over half of Asimov’s visibility and popularity can be credited to the “Foundation.”

Subsequently, they started analyzing the books themselves using data science techniques. In total, the text files they analyzed included over 350,000 words.

“We started to do a few statistical explorations, for instance, to see what the main keywords and what the most frequent words mentioned were,” Janosov explained. “We found that among the most mentioned keywords there were three different planets. If someone is familiar with “Foundation,” they know very well that it is a journey across the galaxy and also across time, because it is set in the far future. So we started to look at the planets themselves and how their storylines unfold.”

In their analyses, Janosov and Borsi could clearly observe how the different plots in the “Foundation” books evolved. For instance, they could determine whether a planet featured in the books was only relevant to a few plots or was central to the story, such as Trantor and Terminus.

“Of course, different planets play different roles in the book,” Janosov said. “That’s why we started to look at the emotional arcs of these planets.”

The idea that stories follow specific emotional patterns, or ‘arcs,” was first introduced by American writer Kurt Vonnegut in 1995. However, a few years ago, Andrew Reagan and his colleagues at the University of Vermont‘s Computational Story Lab in Burlington uncovered six emotional arcs that appear particularly common in storytelling.

They called these arcs:

When analyzing the Foundation, Janosov and Borsi looked more closely at the different planets in the books to see if they had their own emotional arcs. Interestingly, they were clearly able to observe the emotional trends of plots set on each planet in the data.

“We extracted a series of sentences about each planet, and we used a happiness scoring algorithm to create their emotional arc,” Janosov said “It was very interesting to see, for example, that the arc of Trantor was going down, and that coincided with the fact that both Trantor and the galactic were also falling during the series; while on the other hand, Terminus, which is the heart of the Foundation, slowly rises.”

After completing their analyses of Asimov’s “Foundation,” the researchers set out to translate the books into a network. The next step would be to transform this network graph, a data visualization, into a unique digital artwork.

“I have a Ph.D. in network science, so networks are very close to my heart and my core expertise,” Janosov said. “There are many ways to transform a text into networks, but one of the richest ways with this kind of data is to take a sentence and split it into words, as it allows us to consider all the text (all the information). Then, we look at links between the words.”

When the process described by Janosov is repeated across tens of thousands of sentences, patterns start to emerge. For instance, researchers might identify words that are mentioned most frequently or are most related to other words in the text.

“Following this method, we ended up with a network that had a giant component with about 8000 nodes,” Janosov said. “These 8000 nodes are all the words and the worlds (planets) in the Foundation. Among the thousands of words in the network, the big bright ones in the artwork (approximately 50) are the most frequently mentioned planets, and the small ones are the actual words used in the text (e.g., empire, collective, etc.). The links are established based on the sentences and the co-mentions between these sentences.”

The data science part of the researchers’ project ultimately produced a static network visualization. Borsi then used cutting-edge photo manipulation and animation techniques to bring this scientific visualization to life, turning it into a one-of-a-kind digital artwork. In addition, she composed an original soundtrack that is aligned with the dreamy and etheric atmosphere often associated with sci-fi storytelling.

“There is also an interesting parallelism between the paper and the artwork: as the paper dives into the Foundation from the data perspective—taking the very elementary building blocks, words, of the series as a starting point, and uses them to uncover the main structure of the “Foundation’ series—with a network as the end product,” Janosov said. “The artwork follows a similar transcendent journey in a visual way; taking the audience from very far away to the heart of the network as an interstellar journey.”

Asimov played a significant role in the popularization of robotics and AI, for instance, by outlining the ‘three laws of robotics’ in one of his short stories. To pay further tribute to Asimov’s storytelling, the researchers decided to use an AI platform (the OpenAI GPT-3 tool) to write several paragraphs of their paper. However, they will only be revealing these sentences at a later stage.

“The achievement of this paper is two-fold,” Janosov said. “On the one hand, it is a novelty in showing how network science and natural language processing (NLP) can be combined on a project that aims to understand enormous amounts of texts while relating to a timely piece of popular culture. While doing so with a sci-fi series does not seem overly practical at first, we could easily replace the text analyzed with something more ‘business friendly,” such as legal texts or any scientific papers, and suddenly we would have a new legal-tech or systematic-review tool.”

In addition to effectively combining network science and NLP, the researchers were able to merge two common approaches for bringing art and data science together, literally on the same page.

“The other major contribution of our work is that we are not only focusing on analyzing a text (and then transforming into an artwork) or on producing an artwork (and then writing about it), which has been the usual workflow and showing a clear hierarchy between art and science,” Janosov said. “In our study, these two things go hand in hand, as we produced a paper that analyses a literary text while simultaneously transforming it into a digital artwork. While data art has been a growing fresh movement, we are not aware of any other experimental project bridging data science, and digital art in such an explicit way.”

In the future, Janosov and Borsi’s work could inspire other research teams to combine data science and art creation in similar ways. Meanwhile, the two researchers plan to conduct a follow-up study, focusing more on the visual part of their project and zooming into the Foundation’s universe a bit further from a galactic scale.