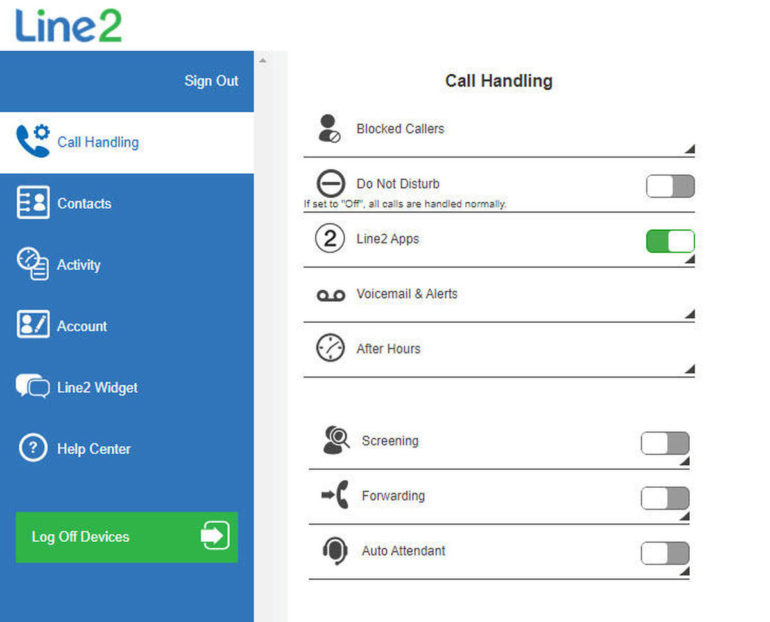 Want to keep your business and personal calls separate? The classic solution is to carry two phones, an option that’s both awkward and expensive. Even if you ignore the cost of a second mobile phone, you can expect to pay $30-40 a month, plus taxes and fees, for that second line. That adds up to hundreds of dollars every year.

You could avoid some of the hassle by setting up a dedicated phone line in your office and forwarding business calls to your mobile device, but that just layers on a separate set of problems (including a lack of support for SMS messages) and another monthly bill.

After wrestling with this problem for years, I finally found a permanent solution in Line2, which offers a “virtual phone system” that’s ideal for small businesses. I ported my old business number to Line2 three years ago, paying $100 per year for a standard account (the price has since gone up but I’m grandfathered in to the original price). I can now use that line on any Android device, iPhone, or iPad. There are capable PC and Mac apps as well. It’s been a major productivity booster and has saved me a small fortune.

As the name suggests, a Line2 plan works with a matching app on your Android device or iPhone to provide up to five separate lines for voice calls, text messages, and group MMS messages. It can work over your mobile network or use Wi-Fi or cellular data to function as a VOIP device. The service includes the full set of features that you expect from a calling plan, including voicemail, intelligent call forwarding, and the ability to merge calls for on-the-fly conference calls.

Pricing: Line2 is a subscription service that offers three tiers, with discounts for purchasing an annual plan. The Starter plan is $150 per year and offers a local or toll-free number, with unlimited domestic calls and texts and basic call forwarding. The Growth plan, at $200 per year, adds an auto-attendant and the ability to schedule call handling for out-of-office hours. The Business plan, for $250 a year, includes call recording, voicemail transcriptions, and advanced usage reports.

I was first introduced to this product a dozen years ago, when it was a startup called Toktumi. The company was acquired by j2 Global (which also owns eFax, Ookla, and PCMag.com) in 2018, and the service has been rock-solid for me through the years.

The mobile apps (iOS and Android) offer a nearly identical feature set and do a good job of replicating the experience of your native phone app. Unlike VOIP-only solutions, you can route calls and messages over your phone carrier’s voice network or use date (cellular or Wi-Fi) to handle that traffic.

One nifty Line2 option is that it can integrate its call history directly into the Recents list on your mobile device, so you can see all your calls in a single list. If you return a Line2 call from that merged list, the app handles the call directly from the line it was originally received on. 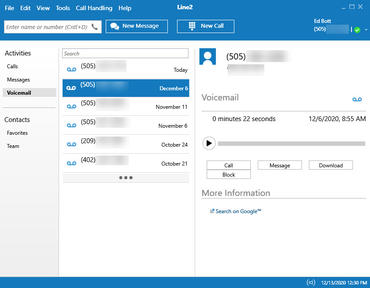 As a one-person shop, I don’t need most of the advanced calling features that Line2 offers, but a small business with a handful of employees who spend a lot of time on the phone could benefit from call queueing, an auto-attendant for handling after-hours calls, and advanced usage reports. For businesses that need to document every interaction, the ability to automatically record all inbound and outbound calls is invaluable.

In the year of the pandemic, I find myself outside a lot less and in front of my desktop PC a lot more, which makes the Line2 desktop app more valuable than it used to be. It’s particularly useful for carrying on multiple SMS/MMS group conversations with the ability to use a full-size keyboard.

Of course, if you really want to get fancy, you can add a slew of premium features to Line2, including fax capabilities ($99.50 a year for unlimited inbound and outbound faxes) and dedicated conference calling (also $99.50 per year for up to 1000 minutes monthly). You can even have Line2 hire professional voice talent to record your greetings and auto-attendant features.

Google Voice The biggest advantage of Google Voice is its price: free for personal use. If you just want to park a number and use it as an alternate line, this is a decent no-frills option. Business users, thogh, have to pay a minimum of $10 per user per month.

iPlum This service has a feature set that’s similar to Line2’s, with prices that are significantly lower. I find it less easy to use but it’s worth checking out.