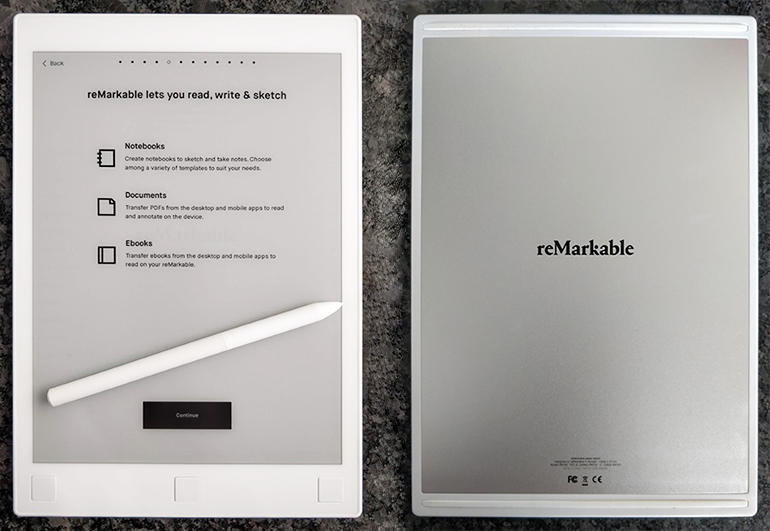 Imagine a world where processors, displays, and networks continue to advance, but where operating systems powering convergence devices have never materialized. There are no laptops that can both play games and make slide shows. There are no smartphones that have assimilated the functions of other portable electronics or that offer transformative apps. Rather, this world’s digital devices are highly optimized for their limited purpose, offering the keen advantage of allowing users to focus on the tasks at hand. Some, such as the digital camera and iPod, have evolved from analog predecessors.

Luckily, we don’t live in such a world, but we occasionally encounter products that seem imported from such a place. Joining products such as the Light Phone 2, two companies recently launched second generations of pioneering E-Ink devices devoted to creating a digital update to the timeless pad/pencil combination and the typewriter: The reMarkable 2 and the FreeWrite Traveler. Their design teams share a passion for simplicity and creativity and antipathy toward distraction, with their products boasting long battery life (but no backlight). Beyond serving as tools for creating notes or short documents, though, they’re aimed at different tasks.

The E-Ink tablet market is niche as it is, but includes two kinds of products. Some, like the recent and impressive Onyx Boox Note Air, seek to come as close as possible to offering a traditional tablet experience with support for Android apps (sometimes via Google Play) and Bluetooth devices like keyboards. Others, like the reMarkable 2, are focused on a few tasks such as reading, marking up, handwriting, and drawing.

Like the pioneering, pricey Sony Digital Paper products that defined this latter group, the reMarkable 2 lets you read and mark up PDFs. However,  the product really shines when it comes to creating. The company offers two styli — one of which enables the use of its other end as an eraser. That and its simple but effective set of tools make it an ideal distraction-free device for sketching, “napkin”-stage diagrams, or taking notes, all of which are organized into notebooks. The reMarkable 2 can convert writing into text when you’re ready to share documents beyond the device, but don’t expect perfection.

The team has developed an elegant interface, Using the reMarkable 2, I was able to pleasurably create simple wireframes for a website in development without having to decode the palettes of a sophisticated iPad drawing app. The selection tools made it easy to copy the page footer design onto other pages in the design. And extensive undo and redo support helped me clean up any mistakes. reMarkable has covered many bases when it comes to connecting its Wi-Fi-enabled device. There are companion apps for smartphones and desktops as well as the ability to email a document directly from the device. And it offers a Chrome extension to send web pages to the device as PDFs to take advantage of its eye-friendly reading experience. However, there’s no web-based mirror of the device’s contents.

reMarkable has made many of the new software features available to owners of the original reMarkable device. But the new hardware blows the original out of the water with its streamlined, ultrathin design (it’s billed as “the world’s thinnest tablet), fluid stylus support, and updated accessories for a more professional presentation. These include some stylish folio cases and, stealing a trick from the Surface and iPad, styli that attach magnetically to the device’s side.

You might think of the Astrohaus FreeWrite Traveler as the latest in a long-running if sporadic line of minimalist dedicated text-generating workhorses dating back to 1989’s Tandy WP-2 (a close cousin of the more famous Model 100), the little-known Brother PowerNote line, the inexpensive AlphaSmart devices that were aimed at teaching keyboarding skills. (A more portable Japanese option, the Pomera line, has struggled to make it to the US.) Like the WP-2 and AlphaSmarts, the original FreeWrite lacked a hinge and placed the display above the keyboard in a wedge. Unfortunately, its homage to the portable typewriter included being about the same size as one, in part to accommodate a mechanical keyboard.

In contrast, the new Traveler roughly resembles the form of a late entry from the netbook blip, the Sony Vaio P, but is larger in every dimension than that 2009 product. It is wide but shallow, built around the dimensions of the keyboard rather than the display (which seems fitting for a writing appliance) with the squarish 6-inch display on the upper deck of the clamshell leaving an expanse of white on either side. Astrohaus acknowledges the lack of screen size optimization but says that including a display that matched the keyboard’s dimensions would require developing an expensive custom screen size. Another side effect of focusing on the keyboard is that the device is relatively thick, particularly for an E-Ink device, to allow for good key travel.

As far as composing goes, a typist from the 1960s would feel right at home on the Traveler. (Explaining Wi-Fi might take some time, though.) But its refinement of the original FreeWrite’s quirky retro design signals that this is not your father’s, nor anyone else’s, word processor. (Indeed, even the  primeval WP-2 had an integrated spell-checker and could manage some formatting.) In contrast, FreeWrites create only unformatted text, They are particularly well-suited to “sprints”, writing as much as one can for a period of time without editing. Astrohaus hosts a sprinting tool on its website as well as a service called Postbox that can sync text to its devices. Dropbox, Evernote, and Google Drive are also supported, as is simply transferring to a PC via a USB connection for when it’s time to polish those drafts into final written works.

The great concession of the Traveler to the edit-as-you-go generation more accustomed to cut and paste (not supported) than Liquid Paper (strongly discouraged) is the addition of cursor key functions; even these require pressing one or more modifier keys to move the cursor by character, word, or line. It’s just painful. There are also dedicated Page Up and Page Down keys. Astrohaus’s begrudging support for cursor movement may stem from its draft-focused philosophy. But it may also reflect that the Traveler’s E-ink display, which is responsive when typing, tends to be less responsive when editing. Astrohaus clearly wants your hands to stay on the keyboard, but enabling touch on the Traveler’s display would allow one to maintain flow while providing more direct and efficient cursor navigation.

An even more targeted tool than the reMarkable 2, the Traveler is designed to be the best friend of a writer who needs to turn off the world and crank out prose. A portioned-off lower part of the display can track word count or time spent writing; in an age where every metric is tracked and analyzed, it would be helpful to be able to save and analyze that data to measure one’s productivity. That said, even as someone who must often reference websites when writing, I found a useful two-device usage scenario for the Traveler, using it alongside an iPad when I needed to look things up, but turning back to the novel device when I needed to focus again on creating without the colorful allure of endless apps at my fingertips.

In terms of price, both the reMarkable 2 ($399 with its baseline stylus) and the FreeWrite Traveler ($429) are competitive with more mainstream options — a baseline iPad with Apple Pencil and a cheap laptop or Chromebook, respectively. Those workhorses can handle nearly infinite versus these ponies’ single trick. But a better comparison to describe the appeal of these devices is to invoke the product that is the standard-bearer for E-ink products: The Kindle. As that product draws one into and keeps one in the flow of a book, so do the reMarkable 2 and FreeWrite Traveler draw you into and keep you in the flow of creation.

9 devices with e-ink displays
The monochrome, sunlight-readable displays remain largely synonymous with e-readers, but they’re moving into other devices large and small.

A laptop that only a writer could love
Most potential customers will write off the FreeWrite Traveler since it costs as much as a solid midrange Windows notebook that can do much more. But the product’s excellent keyboard and outdoor-ready e-ink display can help those who need to maximize their written output.

E-Ink tablets go far beyond the e-reader to offer outdoor productivity
While the iPad doesn’t have much to fear, a new generation of E-ink-based tablets and smartphones are offering superior outdoor readability, long battery life, and reduced eye strain.