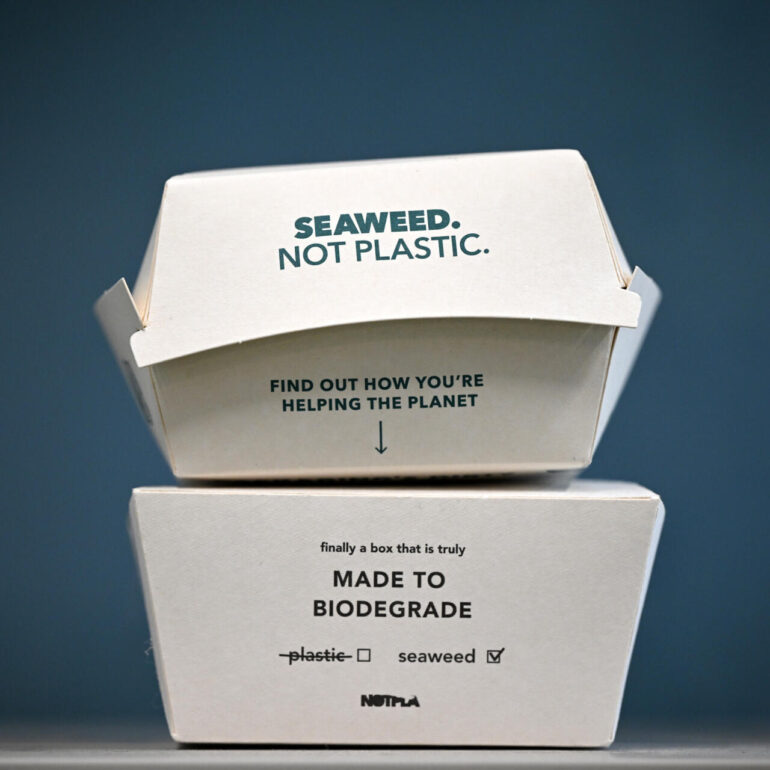 A British start-up founded by two ex-students from France and Spain, crafting biodegradable packaging from marine plants, is aiming to seal royal approval this week when Prince William unveils his latest Earthshot prizes.

Notpla—whose mantra is “we make packaging disappear”—is competing with 14 other firms for five prestigious awards, to be dished out by the prince and a star-studded cast at a ceremony in US city Boston on Friday.

In its second year, the initiative to reward innovative efforts to combat climate change will then be broadcast on UK and US television on Sunday and Monday, respectively, as well as online.

The five winners will each receive a £1 million ($1.2 million) grant.

The co-creator of Notpla, which rather than using environmentally damaging plastics makes various naturally degrading—and even edible—packaging from seaweed and other marine plants, says they have already felt the competition’s benefits.

“Just being there is a massive boost to our visibility,” French co-founder Pierre Paslier, 35, told AFP.

“So that’s already a huge asset to be part of the finalists and I think that if we win, it’s just going to be that on a much larger scale.”

Together with fellow former Royal College of Art student and co-founder Rodrigo Garcia Gonzalez, 38, the duo began their eco-business adventure in a small London kitchen.

They were intent on finding natural alternatives to petrochemicals-based packaging, sampling a variety of materials from tapioca seeds to other starches.

“Now we have a flexible film, we make seaweed paper, we have rigid materials. So it’s really the beginning of a family of seaweed-based technologies that hopefully can help us stop using so much plastic.”

He said their early kitchen exploits had eventually led to the secretly-formulated “Ooho” creation.

An edible bubble membrane made from seaweed—holding water, sports drinks or other flavored liquids including cocktails and sauces—it is marketed as a replacement for single-use plastic cups, bottles and sachets.

Tasting like a gelatinous candy, it can be consumed whole—like a cherry tomato—or from a larger sachet, making it ideal at sporting events and festivals.

It has been widely used at marathons across the UK, including the 2019 London run.

Viral online interest has helped attract the attention of investors, with Notpla expanding rapidly to boast more than 60 employees and finding itself on the verge of manufacturing its products on an industrial scale.

Production of “Ooho” takes place at the firm’s offices in a large warehouse, a stone’s throw from the Queen Elizabeth Olympic Park in east London.

Notpla’s growing young team also has laboratories there as it continues to develop new algae-based products.

It also provided the packaging for all the food sold during the final of the women’s European football championships at London’s Wembley Stadium in July.

Another of its new innovations is a transparent package for dry goods, such as pasta.

Paslier noted that although his products may currently cost more than plastic alternatives, the latter’s sales price fails to account for “the impact on societal ecosystems, health for humans or for marine life”.

“This is basically going to be paid for [by] the next generations and that doesn’t come into the price of plastic that you buy on the market today,” he added.

“So what we want is to be the most affordable, sustainable packaging solution that takes into account its whole lifetime costs.”

Paslier believes seaweed can become the most affordable packaging option, in large part due to its fast growth rate which can top one meter (3.3 feet) a day in the lab.

Its emergence is undoubtedly timely.

A recent OECD report found, at the current rate, worldwide plastic waste will triple by 2060 to one billion tons per year, much of which will pollute the oceans and threaten many species.