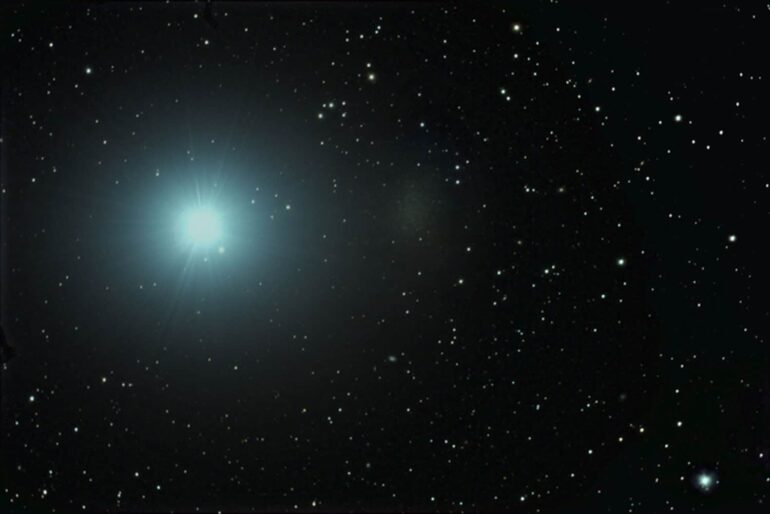 Two astrophysicists at the Harvard-Smithsonian Center for Astrophysics have suggested a way to observe what could be the second-closest supermassive black hole to Earth: a behemoth 3 million times the mass of the Sun, hosted by the dwarf galaxy Leo I.

The supermassive black hole, labeled Leo I*, was first proposed by an independent team of astronomers in late 2021. The team noticed stars picking up speed as they approached the center of the galaxy—evidence for a black hole—but directly imaging emission from the black hole was not possible.

Now, CfA astrophysicists Fabio Pacucci and Avi Loeb suggest a new way to verify the supermassive black hole’s existence; their work is described in a study published today in the Astrophysical Journal Letters.

“Black holes are very elusive objects, and sometimes they enjoy playing hide-and-seek with us,” says Fabio Pacucci, lead author of the ApJ Letters study. “Rays of light cannot escape their event horizons, but the environment around them can be extremely bright—if enough material falls into their gravitational well. But if a black hole is not accreting mass, instead, it emits no light and becomes impossible to find with our telescopes.”

This is the challenge with Leo I—a dwarf galaxy so devoid of gas available to accrete that it is often described as a “fossil.” So, shall we relinquish any hope of observing it? Perhaps not, the astronomers say.

“In our study, we suggested that a small amount of mass lost from stars wandering around the black hole could provide the accretion rate needed to observe it,” Pacucci explains. “Old stars become very big and red—we call them red giant stars. Red giants typically have strong winds that carry a fraction of their mass to the environment. The space around Leo I* seems to contain enough of these ancient stars to make it observable.”

“Observing Leo I* could be groundbreaking,” says Avi Loeb, the co-author of the study. “It would be the second-closest supermassive black hole after the one at the center of our galaxy, with a very similar mass but hosted by a galaxy that is a thousand times less massive than the Milky Way. This fact challenges everything we know about how galaxies and their central supermassive black holes co-evolve. How did such an oversized baby end up being born from a slim parent?”

Decades of studies show that most massive galaxies host a supermassive black hole at their center, and the mass of the black hole is a tenth of a percent of the total mass of the spheroid of stars surrounding it.

“In the case of Leo I,” Loeb continues, “we would expect a much smaller black hole. Instead, Leo I appears to contain a black hole a few million times the mass of the Sun, similar to that hosted by the Milky Way. This is exciting because science usually advances the most when the unexpected happens.”

So, when can we expect an image of the black hole?

“We are not there yet,” Pacucci says.

The team has obtained telescope time on the space-borne Chandra X-ray Observatory and the Very Large Array radio telescope in New Mexico and is currently analyzing the new data.

Pacucci says, “Leo I* is playing hide-and-seek, but it emits too much radiation to remain undetected for long.”