Snapping a black hole: How the EHT super-telescope works 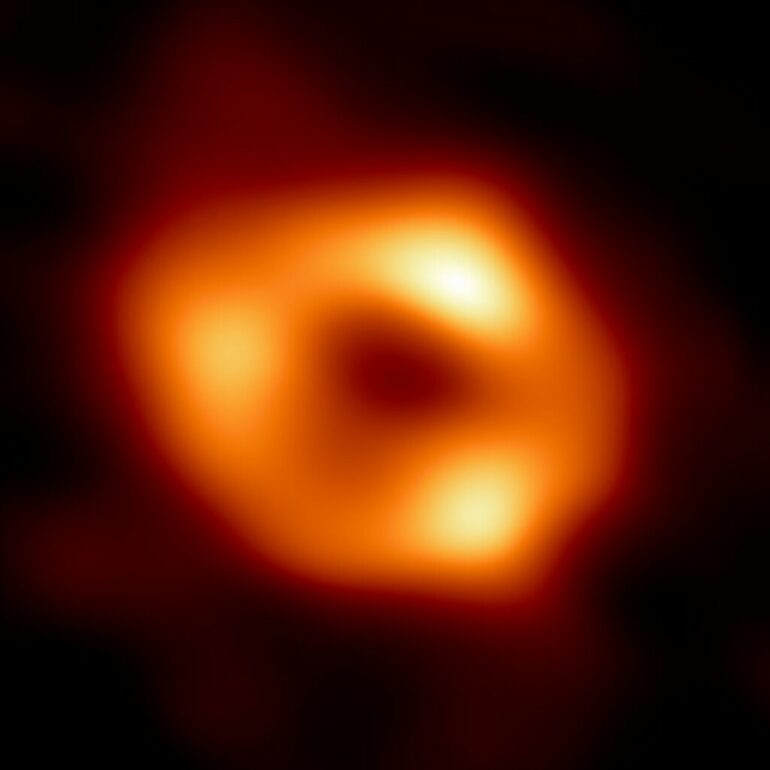 Powerful enough to spot a golf ball on the moon, the Event Horizon Telescope (EHT) is a network of radio dishes designed to detect the light cast when matter disappears into the maw of a black hole.

The EHT is one of a number of remarkable astronomical ventures that in recent years have helped to expand our views of the universe.

On Thursday, scientists unveiled the first image of a supermassive black hole at the center of our own Milky Way galaxy—a behemoth known as Sagittarius A*.

So what is the EHT and how does it work?

What is the EHT?

The EHT is a unique network of antennae across the world that together form a virtual telescope nearly as wide as Earth itself—about 10,000 kilometers (6,200 miles) across.

The radio-dish network is trained toward our galaxy, the Milky Way, and was launched in 2015 involving 80 different astronomy institutes.

In 2019, the EHT revealed the first image of a black hole called M87* in a galaxy far from our own.

How can it see black holes?

On Thursday, an international team of astronomers gave us the first glimpse of the supermassive black hole at the center of the Milky Way.

Dubbed Sagittarius A* the gravity- and light-sucking monster some 26,000 light years from Earth has the same mass as four million Suns.

Observing a black hole is, by definition, impossible, since no light can escape it.

But the EHT circumvents this problem.

It captures the flash of light produced when matter—planets, debris, anything that comes too close—is sucked into a black hole’s outer boundary, called an event horizon.

“We can detect the silhouette of a black hole against a glowing background of gas and dust,” Frederic Geth of Franco-German Millimetric Radio-astronomy Institute told AFP.

British cosmologist Stephen Hawking once compared the event horizon to going over Niagara Falls in a canoe.

If you are above the falls, it is still possible to escape if you paddle away hard enough. But once you tip over the edge, however, there is no going back.

How did it spot Sagittarius A*?

The cloud of matter swirling around a black hole is only visible using a very precise band of radio frequencies, called millimetric waves, and only using a radiotelescope—like a TV satellite dish but much bigger.

It needs to be huge to detect the weak radio signal emitted by an object at such a vast distance from Earth.

But no single radiotelescope with current technology has a high enough resolution.

So astronomers used interferometry—linking a pair of radio antennae trained on the same object in the sky, to create a “virtual” telescope called an interferometer. This can see fine detail, like the zoom lens of a camera.

The EHT project goes even further, using radiotelescopes at eight observatories around the world—from the Americas to Europe, Greenland to Antarctica—to create a new and more vastly powerful telescope.

This technique is known as very long baseline interferometry (VLBI).

As the Earth turns, the different telescopes catch slightly different waves of light emitted by the matter around a black hole, and these patterns can eventually be combined to form a more complete picture.

The signals received at each antenna have to be matched wave for wave, even if the dishes are half a world away, so each site is equipped with an atomic clock.

Why does it matter?

The EHT’s success in detecting M87* and now Sagittarius A* provides double proof of supermassive black holes—a giant leap forward in consolidating concepts of how the cosmos is structured.

Einstein’s general theory of relativity has so far been unable to explain what happens in a black hole at the most infinitely small scale.

The black hole is “the most extreme, chaotic and turbulent” environment in existence, German astrophysician Heino Falcke told AFP.

But thanks to the EHT, aspects of this fundamental theory can now be tested.

Citation:
Snapping a black hole: How the EHT super-telescope works (2022, May 12)