The first experimental realization of a dissipative time crystal 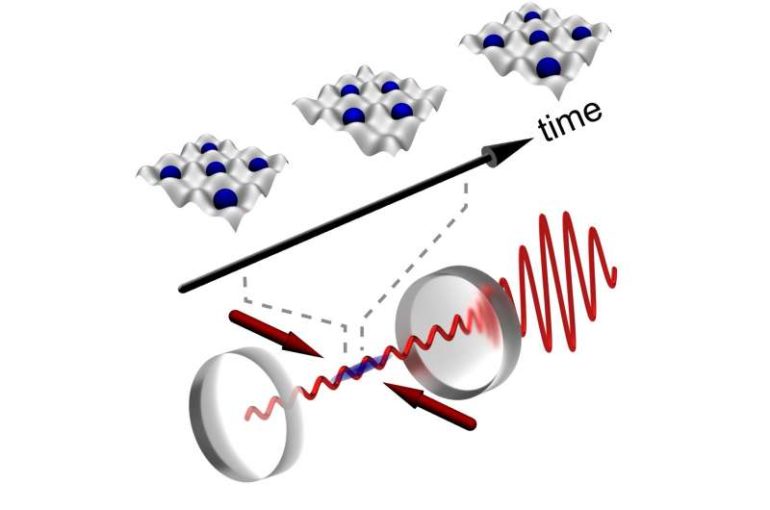 A time crystal is a unique and exotic phase of matter first predicted by the American physicist Frank Wilczek in 2012. Time crystals are temporal analogs of more conventional space crystals, as both are based on structures characterized by repeating patterns.

Instead of forming repetitive patterns across three-dimensional (3D) space, as space crystals do, time crystals are characterized by changes over time that occur in a set pattern. While some research teams have been able to realize these exotic phases of matter, so far, these realizations have only been achieved using closed systems. This raised the question of whether time crystals could also be realized in open systems, in the presence of dissipation and decoherence.

Researchers at the Institute of Laser Physics at the University of Hamburg have recently realized a time crystal in an open quantum system for the first time. Their paper, published in Physical Review Letters, could have important implications for the study of exotic phases of matter in quantum systems.

“The primary objective of our research is to investigate dynamical phases of matter known for how their properties change over time in an orderly manner,” Hans Keßler, one of the researchers who carried out the study, told Phys.org. “During my Ph.D. studies, my colleagues and I investigated the phase transition from a homogenous BEC to a self-ordered super-radiant phase and we were studying how the system reacts on a quench from one steady state to another.”

As no physical state is innately steady, the next step for the previous research carried out by Keßler and his colleagues was to investigate dynamical phases of matter. These are essentially transitions through which materials change their properties over time.

The main objective of the researchers’ recent study was to realize a dissipative time crystal in a laboratory setting. To do this, they used a quantum many-body system strongly coupled to a narrow band optical cavity.

“It was crucial for our experiments that the light field inside the resonator and the density of the many-body system evolved on the same footing, which is given by the cavity band width and the frequency corresponding to a single photonic recoil, respectively,” Keßler explained. “This situation is unique in our atom-cavity system and opens up the possibility to study dynamic phases of matter.”

As real physical systems are never fully isolated from their surroundings, they are susceptible to dissipation (i.e., loss or waste of energy). This makes it difficult or impossible to realize quantum systems that are truly closed for arbitrary lengths of time. This is what ultimately inspired Keßler and his colleagues to attempt the realization of a time crystal in an open quantum system instead.

“So far, the time crystals that were demonstrated in various groups required careful isolation from the environment, since dissipation has the undesirable effect of ‘melting’ those time crystals,” Keßler said. “The unique thing about the time crystal in our atom-cavity setup is its positive role in preventing dissipation, as it helps to stabilize the system’s dynamics. The demonstration of time crystalline order in an open system is thus the most important achievement of our study.”

“As we proposed for the scenario outlined in our recent paper, our atom-cavity system will switch to a state of matter characterized by periodic oscillations at some intrinsic frequency,” Keßler added. “The relative phase of the oscillations in such a time crystal is expected to take any values between 0 and 2pi. This is very different from discrete time crystals, wherein the relative phase can only be either 0 or pi. In a way, a continuous time crystal is closer to a solid crystal in that they both break continuous symmetry.