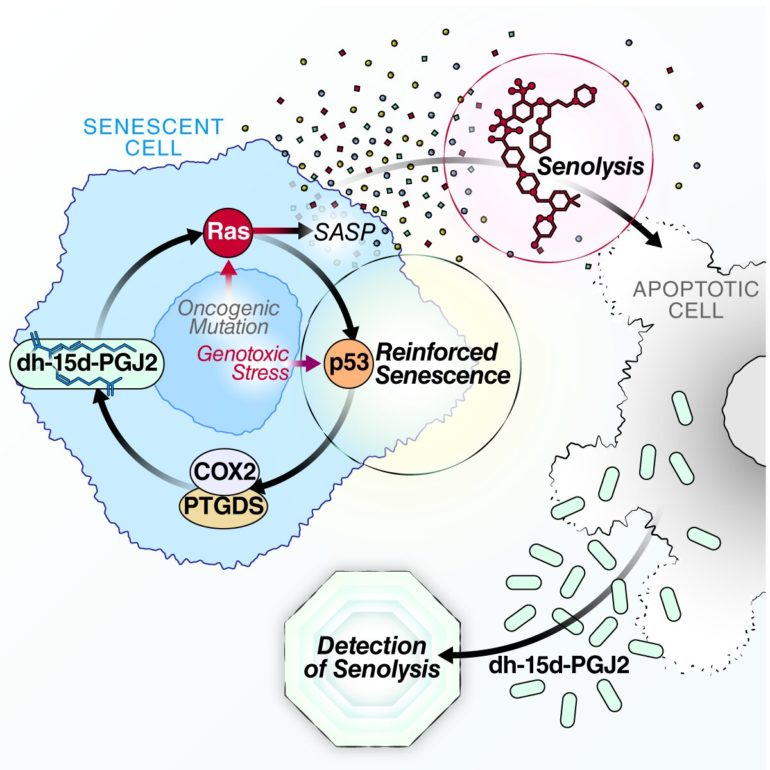 Buck Institute researchers have discovered and are developing a novel, non-invasive biomarker test that can be used to measure and track performance of senolytics: a class of drugs that selectively eliminate senescent cells. The discovery is expected to play a major role in efforts to develop treatments that would battle a myriad of chronic age-related conditions that range from arthritis to lung disease to Alzheimer’s disease and glaucoma. This biomarker is a unique signaling lipid metabolite, normally exclusively intracellular, but is released when senescent cells are forced to die. This metabolite is detectible in blood and urine, making non-invasive testing possible. With a growing list of senolytic drugs in development, detecting this metabolite via a companion test could verify performance of senolytic candidates.

“The list of age-related diseases definitively linked to cellular senescence keeps growing, as does the number of biotech companies racing to develop drugs to eliminate senescent cells,” said Buck professor Judith Campisi, Ph.D., senior scientist on the study. “While the field has never been more promising, the lack of a simple biomarker to measure and track efficacy of these treatments has been a hindrance to progress. We are excited to bring this new biomarker to the field and look forward to it being used in the clinic.”

During cellular senescence, stressed or damaged cells permanently stop dividing, a putative mechanism to safeguard against cancer. Senescent cells are not dead—they spew out a stew of bioactive molecules that promote wound healing and chronic inflammation, the latter playing a major role in many age-related diseases as the cells accumulate over time. This bioactive stew is known as the SASP (senescence-associated secretory phenotype); its composition, and deleterious effects have been well-studied.

This work, performed in human cell culture and mice, shows that senescent cells also synthesize a large array of oxylipins, bioactive metabolites derived from the oxygenation of polyunsaturated fatty acids. “Lipid components of the SASP have been vastly understudied,” says lead scientist Christopher Wiley, Ph.D., a former assistant research professor at the Buck, now at the Jean Mayer USDA Human Nutrition Research Center on Aging at Tufts University, Boston. “The biosynthesis of these signaling lipids promotes segments of the SASP and reinforces the permanent growth arrest of senescent cells. This work provides a new way of understanding and studying senescence-driven pathology,” he said. Oxylipins are implicated in many inflammatory conditions including cardiovascular disease and pain response. Many commonly used drugs, such as aspirin and ibuprofen, act by preventing oxylipin synthesis.

Wiley says senescent cells change their fatty acid metabolism and they do it in such a way that free polyunsaturated fatty acids accumulate inside the arrested cells where they are used to manufacture oxylipins. Researchers identified one of these fatty acids, 15-deoxy-delta-12, 14-prostaglandin J2 (dihomo-15d-PGJ2), as unique to senescent cells; it accumulates inside senescent cells and is released when the cells die. In this study, mice were given chemotherapy which induces widespread senescence, followed by a senolytic drug. The biomarker was only detected in the blood and urine of mice treated with both chemotherapy and the senolytic, but not with either on its own, confirming specificity for senolysis.

Researchers also showed that dihomo-15d-PGJ2 had a functional role in senescence. Inhibiting its synthesis allowed a subset of cells to escape senescence and continue dividing, and had a less inflammatory SASP profile. Addition of dihomo-15d-PGJ2 to non-senescent cell drove them into senescence by activating RAS, a cancer-promoting gene that is also known to cause senescence.

“We hope that identifying and including these bioactive lipids as part of the SASP will encourage researchers working in a broad range of fields to take a new look at cellular senescence,” said Campisi. “The fact that one of these lipids ends up being a simple non-invasive biomarker for tracking the efficacy of treatments is a huge plus for those of us working to stem the ravages of age-related disease.”

The study is published in Cell Metabolism.

Provided by
Buck Institute for Research on Aging