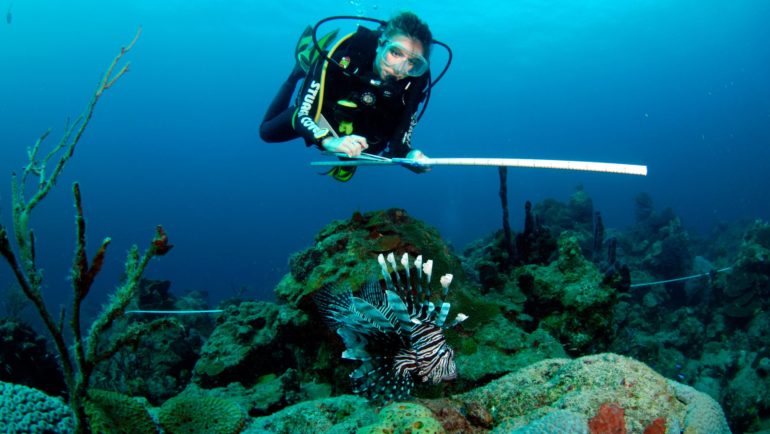 Coastal countries have between two and five years to act to protect native fish species once voracious lionfish arrive in their waters, according to a University of Alberta ecology professor who helped create a tool to predict which fish are in danger.

The lionfish, originally a popular aquarium species native only to the Pacific and Indian oceans, is now a highly invasive species throughout the Atlantic Ocean and Mediterranean Sea, where they are known to consume hundreds of native fish species.

“There’s lots of concern about what their impacts will be and also which species are at risk,” said Stephanie Green, Canada Research Chair in Aquatic Global Change Ecology and Conservation in the Faculty of Science. “They’re the perfect invader.”

Getting ahead of the invaders

Lionfish are gape-limited predators, which means they swallow their prey whole, and can grow to a formidable half-meter long. They have no natural predators in the Atlantic, thanks in part to 18 poisonous spines, and can devastate a population of their coral reef prey—killing as much as 95 percent—in just a couple of years.

“We can look in lionfish stomachs to see what they’re eating, but often that information comes too late to protect the native species,” Green said.

“Instead, we need to anticipate what lionfish are likely to eat as they spread to new areas and encounter a totally new diet, based on their food preferences.”

To create the framework identifying vulnerable fish species, Green joined forces with Christi Linardich, a scientist from the Global Marine Species Assessment team associated with the International Union for Conservation of Nature, which publishes the “IUCN Red List of Threatened Species”—assessments of the extinction risk for virtually every wildlife species in the world.

“We literally started with every Caribbean fish that’s out there,” Linardich said.

Together with U of A graduate student Cole Brookson, Green and Linardich worked to narrow the field to those species that live in reef systems where lionfish typically hunt.

In classifying the relative vulnerability of fishes, the team looked for traits known to influence susceptibility to lionfish predation, including body shape, water column position and aggregation behavior, and habitat overlap as well as the degree of geographic range restriction.

Identifying the most vulnerable species

The team identified 77 Caribbean and 29 Brazilian species as highly vulnerable.

Species of particular concern are the social wrasse—a fish known only from shallow waters around a small island chain in central Belize, where lionfish were first sighted in 2010—and the salmon-spotted jewelfish, known only from coral reefs off a single island off of Brazil, where lionfish have not yet invaded but are predicted to soon reach.

Green noted many of the vulnerable species are found below scuba diving depths, beyond 120 feet deep, and only known to science from very few specimens.

“If lionfish take hold in high numbers where these species occur, they could be lost before we even know much about them,” she said.

With the framework in hand, the team identified hot spots on the lionfish path. Jurisdictions include Belize, the Bahamas and Curaçao as well as several locations in Brazil: the Fernando de Noronha Archipelago, Rocas Atoll and the coasts of São Paulo and Santa Catarina states.

“Brazil is a really big deal because they have a number of what we call endemic fish, which means that they’re not found anywhere else, and many are restricted to small oceanic islands where major threats can be catastrophic to a species’ continued existence,” said Linardich.

“Lionfish invasion really is a global issue,” Green said. “There are more than 30 countries being impacted by this species. As the invasion intensifies and expands, there is an urgent need to identify species most at risk.”

Current strategies to control lionfish are mainly through volunteer efforts to hunt them, lionfish derbies and the creation of lionfish fisheries.

“One of the things we have in our favor is lionfish are actually very tasty fish,” Green said.

The study, “Trait-based vulnerability reveals hotspots of potential impact for a global marine invader,” was published in Global Change Biology.


Citation:
Tool predicts which native fish species are most at risk from lionfish predators (2021, August 20)
retrieved 22 August 2021
from https://phys.org/news/2021-08-tool-native-fish-species-lionfish.html