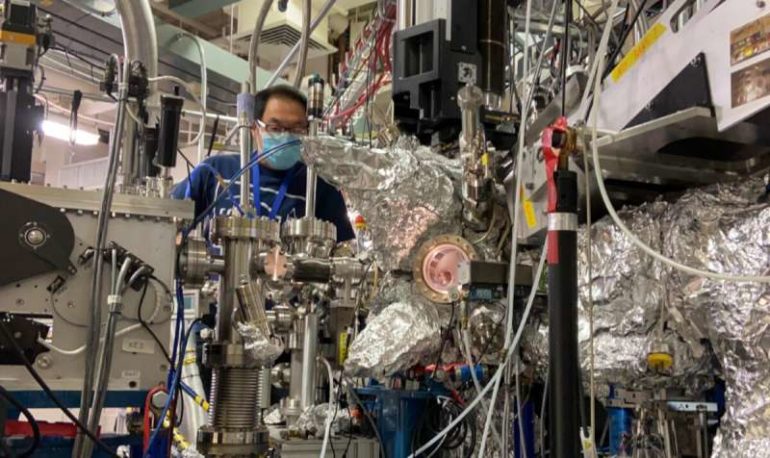 An international team working at the U.S. Department of Energy’s Lawrence Berkeley National Laboratory (Berkeley Lab) used a unique X-ray instrument to learn new things about lithium-rich battery materials that have been the subject of much study for their potential to extend the range of electric vehicles and the operation of electronic devices.

The researchers focused their investigations on a material called lithium manganese oxide (Li2MnO3), the extreme example of so-called “lithium-rich” materials, containing the largest amount of lithium possible within this family of materials. A recently developed tenet of the battery community is that battery electrodes composed of lithium-rich materials could offer high-voltage, high-capacity operation because the oxygen in the material participates in reversible chemical “redox” reactions, in which oxygen atoms cyclically lose and gain electrons, helping the battery have a higher capacity to store and use electrical charge.

This work, however, showed that the reversible reactions don’t, in fact, involve oxygen in Li2MnO3 during battery operation. Instead, further analysis on the other element in the material, manganese, revealed that the reason the material could be cycled is because of an unusual and complete switch to manganese-based reactions, with a relatively low capacity, right after the first charging. The finding paves the way to explorations of high-energy electrode materials outside the lithium-rich family.

Moreover, the research team was especially surprised to observe a “partially reversible” formation and disappearance of carbonate compounds on the surface of the material. These highly reactive surface properties suggest the material can function as a catalyst and could facilitate the reversible chemical reactions required for exotic next-gen batteries like lithium-air and lithium-carbon dioxide batteries. The carbonate compounds observed on the surface of Li2MnO3 contain carbon bonded to oxygen atoms, meaning lithium-rich materials could be effective catalysts for reactions involving carbon dioxide gas.

“What we all feel is exciting is that, through a fundamental spectroscopic study of this material, we not only clarified the reaction mechanism of this long-debated material, but also found a conceptually different use of it as a catalyst,” said Wanli Yang, a senior scientist at Berkeley Lab’s Advanced Light Source (ALS) who adapted a technique called resonant inelastic X-ray scattering (RIXS) for this type of battery study. He also served as a study co-author, working as part of a large international collaboration. The study was published March 4 in the journal Joule.

“Some findings indicated that this material is actually more suitable as a catalyst due to its highly reactive surface. So our battery material collaborators tested it as a catalyst and found it indeed has superior performance for lithium-carbon dioxide and lithium-air batteries,” he added.

The researchers noted in the study that the high-capacity carbonate cycling based on the Li2MnO3catalyst has a superior reversibility compared to similar systems with typical oxide-based catalysts. The results also open the door for a whole class of alkali-rich materials to be used as catalysts for other applications, such as fuel cells.

The key to the study was a specialized beamline at the ALS that can essentially dissect chemical reactions one element at a time to find out which ones are—or are not—involved in reactions. The ALS is a synchrotron that can produce light in a range of “colors,” or wavelengths, from the infrared to X-rays.

The researchers used RIXS to map the chemistry of the samples at different stages in the charge-discharge cycle. They found no evidence of the reversible oxygen redox reactions expected for this material by many scientists. Instead, they found oxygen is involved in only a one-way oxidation reaction, and in very active surface reactions.