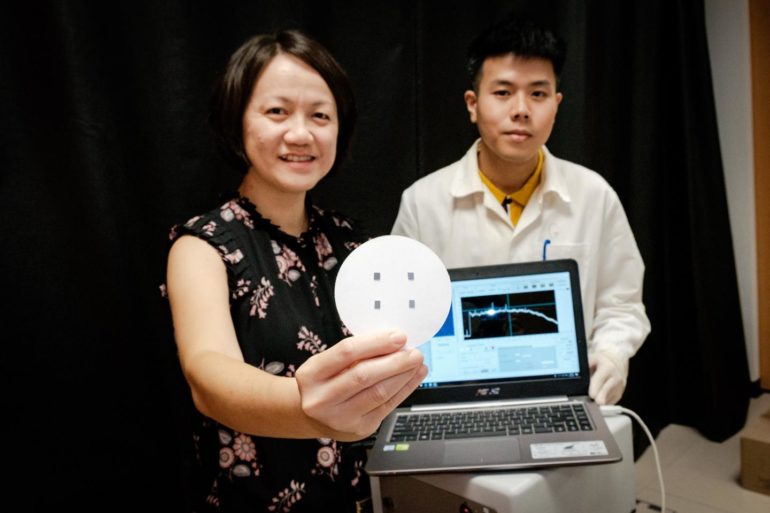 Scientists at Nanyang Technological University, Singapore (NTU Singapore) have developed a device that can identify a wide range of airborne gases and chemicals instantly.

The new prototype device is portable and suitable for rapid deployment by agencies to identify airborne hazards, such as from tiny gas molecules like sulphur dioxide. It can also identify larger compound molecules such as benzene, known to be harmful to human health.

It can provide real-time monitoring of air quality such as during haze outbreaks, and assist in the detection of gas leaks and industrial air pollution.

Developed by a research team led by Associate Professor Ling Xing Yi at the School of Physical and Mathematical Sciences, the new technology was reported last month in science journal ACS Nano.

Current methods of identifying gases in the air use a laboratory technique called Gas Chromatography – Mass Spectrometry (GC-MS), which is reliable but requires tedious sample collection and takes between a few hours and a few days to obtain results from air samples.

Emergency scenarios require a fast and ongoing analysis of potential air contamination, such as following a natural disaster, chemical spill or illegal dumping of toxic waste, so that emergency responders can take appropriate action.

WFH has kept us productive. But it may have made us less creative, too

How the new device works

The new device uses a small patch made of a special porous and metallic nanomaterial to first trap gas molecules. When a laser is shone on it from a few metres away, the light interacts with the gas molecules, causing light of a lower energy to be emitted. When analysed, it gives a spectroscopic readout in the format of a graph chart.