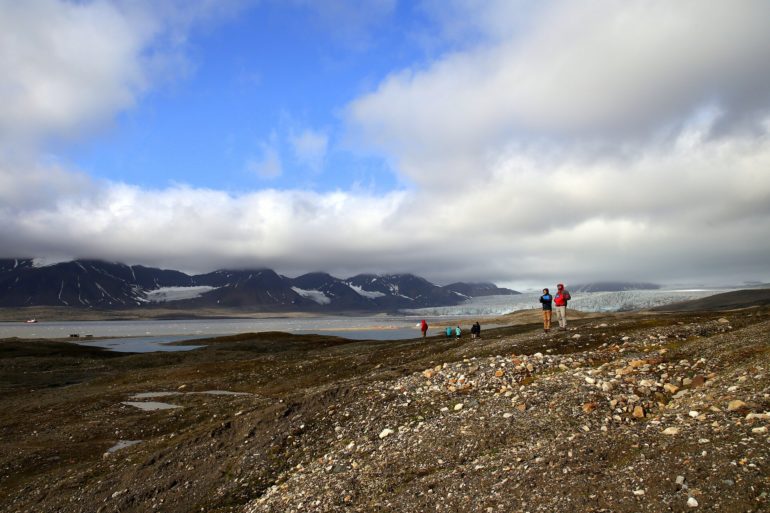 Rising global temperatures are causing frozen Arctic soil— permafrost—in the northern hemisphere to thaw and release CO2 that has been stored within it for thousands of years. The amount of carbon stored in permafrost is estimated to be four times greater than the combined amount of CO2 emitted by modern humans.

Research results from an international team, which includes a researcher from the University of Copenhagen among others, suggests that the newly discovered phenomenon will release even larger quantities of CO2 than once supposed from organic matter in permafrost—a pool of carbon previously thought to be bound tightly and safely sequestered by iron.

The amount of stored carbon that is bound to iron and gets converted to CO2 when released is estimated to be somewhere between two and five times the amount of carbon released annually through anthropogenic fossil fuel emissions.

Researchers have long been aware that microorganisms play a key role in the release of CO2 as permafrost melts. Microorganisms activated as soil thaws convert dead plants and other organic material into greenhouse gases like methane, nitrous oxide and carbon dioxide.

What is new, is that the mineral iron was believed to bind carbon even as permafrost thawed. The new result demonstrates that bacteria incapacitate iron’s carbon trapping ability, resulting in the release of vast amounts of CO2. This is an entirely new discovery.

“What we see is that bacteria simply use iron minerals as a food source. As they feed, the bonds which had trapped carbon are destroyed and it is released into the atmosphere as greenhouse gas,” explains Associate Professor Carsten W. Müller of the University of Copenhagen’s Department of Geosciences and Natural Resource Management. He elaborates:

“Frozen soil has a high oxygen content, which keeps iron minerals stable and allows carbon to bind to them. But as soon as the ice melts and turns to water, oxygen levels drop and the iron becomes unstable. At the same time, the melted ice permits access to bacteria. As a whole, this is what releases stored carbon as CO2,” explains Müller.

The study has just been published in Nature Communications.

Although the researchers have only studied a single bog area in Abisko, northern Sweden, they have compared their results with data from other parts the northern hemisphere and expect their new results to also be valid in other areas of permafrost worldwide.

“This means that we have a large new source of CO2 emissions that needs to be included in climate models and more closely examined,” says Carsten W. Müller.

Even though carbon stored in permafrost has a major impact on our climate, researchers know very little about the mechanisms that determine whether carbon in soil is converted into greenhouse gases.

“The majority of climate research in the Arctic focuses on the amount of stored carbon and how sensitive it is to climate change. There is a great deal less of a focus on the deeper mechanisms which trap carbon in soil,” says Carsten W. Müller.

Researchers remain uncertain about how much extra carbon from soil could potentially be released through this newly discovered mechanism. Closer investigation is needed.