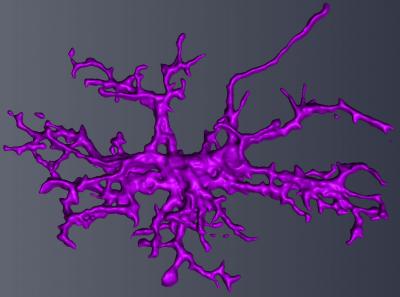 JUPITER, Fla.– April 14, 2020 — Many cases of autism spectrum disorders (ASDs) may result from problems in immune cells that normally work to trim back unneeded brain connections in early life, suggests a new study led by scientists at Scripps Research.

The study, published Tuesday in Nature Communications, examined the effects of a set of gene mutations that account for a small percentage of autism disorders. These mutations are known to cause a general overproduction of many proteins in brain cells, but how that overproduction leads to autism behaviors has been a mystery.

The scientists found evidence that the most relevant effect of this protein overproduction occurs in brain-based immune cells called microglial cells. These cells normally prune unneeded brain connections, or synapses, as the brain develops in childhood.

Working in mice, the scientists determined that the protein overproduction impairs microglial cells in a way that hampers their synapse-pruning function, but only in males, leading to autism-like social behavior deficits.

Polar bears have captivated artists’ imaginations for centuries, but what they’ve symbolized has changed over time

The finding dovetails with the long-standing observation that autism disorders are four to five times more prevalent in males than females. It is also consistent with recent evidence that in people with ASDs, the brain commonly has a higher number of synapses than normal.

“Our study suggests that impairments in microglia play a key role in the development of autism behaviors, at…