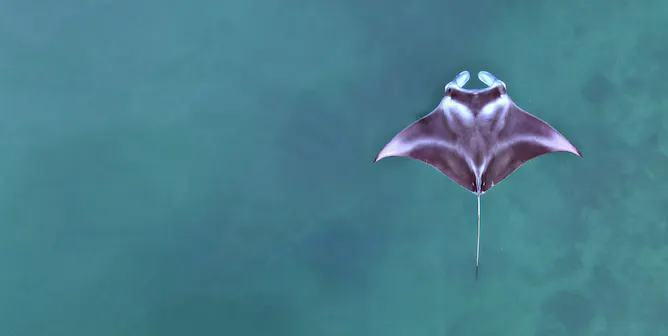 The early lives of manta rays remain a mystery. This is possibly because most researchers tend to pay more attention to large adult rays than their pups.

But now, thanks in part to research conducted by our team, some of the secret lives of these pups have been revealed. Using photo identification, drones, satellite and acoustic tracking, we were able to discover how young reef manta rays use the famous touristy Wayag Lagoon in remote Raja Ampat islands, Papua, as their habitat to grow up.

The discovery of this nursery gives a ray of hope for the recovery and persistence of this globally vulnerable species, whose population has been decreasing in the last few decades.

The eight-year-long research that I conducted along with my team has successfully revealed some of the mysteries.

This study, published in Frontiers in Marine Science, presents the most comprehensive and up-to-date description of a reef manta ray nursery.

It is the first in the world to conclusively confirm a nursery habitat of manta rays.

For newborn manta rays, using shallow sheltered habitats like lagoons as a nursery is crucial to ensure their survival. Lagoons provide calm water suitable for the baby rays that are just starting to swim. They also offer protection from predators like big sharks.

In addition to providing a source of food, the nursery accommodates the baby rays with a place where they can interact and “exchange experiences” with their young mates.

Currently, there are only few places in the world that can potentially become nurseries for manta rays. These include the Gulf of Mexico (Flower Garden Banks and the southern coast of Florida, United States), Palmyra Atoll (the south end of Hawaiian waters), the Maldives and Indonesia (Nusa Penida and Raja Ampat).

An area can serve as a manta ray nursery if it meets these three criteria:

Proving these three criteria can be challenging, take years of effort and involve various methods.

How were the baby manta rays monitored and tracked?

Before confirming that Wayag Lagoon is a nursery for baby manta rays, we conducted regular monitoring every 3–6 months from 2013–2021 in the area.

Using photo identification, we managed to identify 34 young manta rays from 47 encounters. Five of the 34 rays were photographed in the lagoon after 16 months. They include two that, after 21 months, were still found in the lagoon.

Each manta ray has a distinctive spot pattern like our fingerprints on the underside of its body, thus allowing us to distinguish one from another.

Unfortunately, we could not photograph all the young manta rays we encountered in each survey. This is mainly because of the murky waters in the lagoon and some challenges in getting close to these skittish young rays.

In this lagoon, the young rays were often seen somersault feeding and cruising along the lagoon surrounded by towering limestone outcrops.

The young rays were quite small. Using drones, we measured two young rays with a size of 218 cm and 219 cm in wingspan.

We used satellite transmitters deployed on five rays in Wayag Lagoon in 2015 and 2017 to investigate the home range of these young rays.

After tracking for 21–69 days, we found that they spent more time inside the lagoon. They also occasionally took short journeys out of the lagoon for a few days before returning to the lagoon.

To understand the residency of young rays, we used acoustic tracking, a system functioning like an attendance machine. We put this transmitters on nine young rays and acoustic receivers at five sites in Wayag Lagoon.

Each transmitter comes with a unique code, allowing us to identify each manta ray that happened to be within receiver detection range and therefore was detected by the receiver.

The young rays were also detected for 24 hours in Wayag Lagoon. They remained in the lagoon to feed, interact with their mates or cruise around the lagoon.

Taken together, these findings strongly suggest that the young manta rays are highly dependent on this nursery for their health and survival.

This new study strengthens my research published in 2020, which identified Wayag lagoon as a potential reef manta nursery.

That being said, I still have some questions lingering in mind. How long do baby manta rays live in the nursery before they leave? What factors influence their movements within the relatively small area in the Wayag Lagoon?

Even today, there are still many mysteries about the lives of manta rays that must be revealed. Thus, further research on manta rays’ habitats and survival is crucial to support efforts to protect this globally vulnerable species.