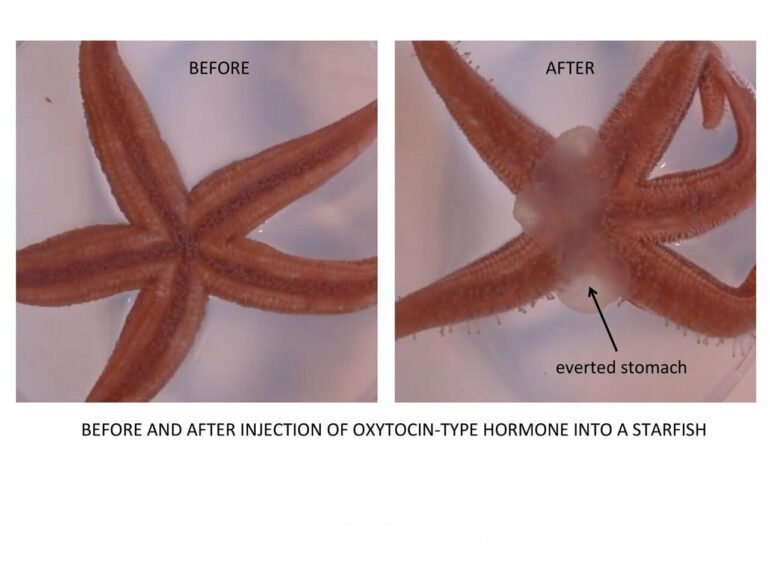 Research from academics at Queen Mary University of London School of Biological and Behavioral Sciences, published in BMC Biology, has revealed the evolutionary history of a hormone that controls sexual maturation in humans.

During puberty our bodies undergo changes whereby a child’s body matures into an adult body capable of sexual reproduction. In some people, however, the onset of puberty is delayed and genetic analysis of this condition has provided insights into the hormonal mechanisms that control sexual maturation. Thus, in 2003 it was discovered that onset of puberty is triggered by the release of a hormone in the brain (a neurohormone) known as kisspeptin, which then exerts its effects by binding to a protein known as the kisspeptin receptor. But when did kisspeptin and its receptor originate in the evolutionary history of life on earth?

To address this question, the genomes of different types of invertebrate animals were analyzed to search for genes encoding proteins related to the human kisspeptin receptor. This revealed the presence of genes encoding kisspeptin-type receptors in several different types of invertebrates, including mollusks (e.g. snails), annelids (e.g. earthworms) and echinoderms (e.g. starfish). Based on this finding, the researchers concluded that kisspeptin and its receptor must have originated at least half-a-billion years ago in a common ancestor of the Bilateria—animals that exhibit bilateral symmetry during their life-cycle, which include most animals on earth. What’s more the researchers discovered that, unlike humans that have just one kisspeptin receptor gene, some animals such as starfish have lots of genes encoding kisspeptin-type receptors, while others animals such as insects do not have any because of gene loss during their evolutionary history.

Dr. Nayeli Escudero Castelán, who contributed to the study as part of her Ph.D. studies at Queen Mary University of London, explained how this part of the study was done:

The surprising discovery of such a complex chemical signaling system in starfish has provided new insights into the evolutionary history of kisspeptin. The findings indicate that the common ancestor of bilaterian animals would have had at least two types of kisspeptins, one of which appears to have been lost in the vertebrate lineage that includes humans.

Furthermore, starfish and their kind have uniquely evolved kisspeptin-related molecules known as SALMFamides, neurohormones that were first discovered in starfish over thirty years ago, long before the discovery of kisspeptin as a puberty hormone in humans.

Maurice Elphick, Professor of Animal Physiology & Neuroscience and lead author of the study, said, “I discovered SALMFamides in starfish when I was a Ph.D. student at Royal Holloway University of London and the University of Florida in the 1980s, so it especially pleasing for me that many years later we have discovered the receptors that these molecules bind to and their relationship with the puberty hormone kisspeptin.”

So what are the functions of the kisspeptin-type molecules in starfish? Ongoing research is addressing this question to investigate if there is evidence of an evolutionarily ancient role of kisspeptins as regulators of sexual reproduction in starfish. However, evidence of roles in other biological processes has already been obtained for SALMFamides, which regulate the unusual extra-oral feeding behavior of starfish by triggering eversion of their stomach out of the mouth. Thus, zoological studies are changing our perspective on kisspeptin as a puberty hormone in humans, revealing its complex evolutionary history and providing new insights into its functions and relationships with molecules discovered in other animals.